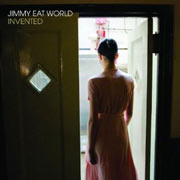 Emo is a genre for the teens, and while there are tons of teens making emo music, there’s also some older folks, often leaning towards the harder ‘emocore’ sound.  Sunny Day Real Estate started up this trend, and another major actor in it has been Arizona’s Jimmy Eat World.  Since breaking through in 2001 with Bleed American and “The Middle”, they’ve been consistently pretty good – for a bunch of adults doing emo, and that more-or-less continues with their latest, Invented, though less more than more.

Jimmy Eat World’s strength has long been in bigness – bigger is better for this band, such as with “The Middle” or other previous singles like “Sweetness” or “Big Casino”.  But on Invented, they seem to shy away from that, favoring other, less rewarding emo styles.  Their stabs at electro-rock on “My Best Theory”, “Higher Devotion” and “Action Needs an Audience” (where guitarist & original lead singer Tom Linton sings lead vocals for the first time in eleven years) are passable at best – Jimmy Eat World are not Muse (QRO album review).  The emo-sway and beauty of “Stop”, “Cut”, and the title track aren’t bad for what they are, but aren’t the band’s strong suit, and neither is the brightening & procession of “Heart Is Hard to Find”, “Littlething” or “Mixtape”.

Jimmy does occasionally go World-size on Invented, making “Evidence” moderately more effective, doing well with “Movielike”, and doing very well with “Coffee and Cigarettes”.  Evocative, but also seriously catchy, and the catch doesn’t take away from the emotion, “Coffee” stands with Jimmy Eat World’s best.  The song feels like a John Hughes movie – which is about when the band was the age singer Jim Adkins sings about, leaving home after finishing school.

Invented isn’t going to win over a new fans for Jimmy Eat World, though even hipster-haters would be hard-pressed not to enjoy “Coffee and Cigarettes”.  “Coffee” aside, current Jimmy Eat World fans will receive Invented warmly, if not exactly head-over-heels.  It’s not a bad plateau to be on, but it is a plateau.