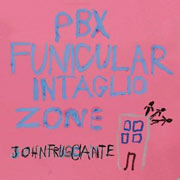 John Frusciante isn’t much into trying to prove himself.  That fact has been made clear by his two departures from the Red Hot Chili Peppers and his plethora of eclectic solo material over the years.  He is a bit of a confusing fellow, truth be told.  It has been said of him by the Mars Volta’s Omar Rodriguez-Lopez recently that he isn’t into music that is a product.  However, one might feel otherwise when considering the merchandise portion of his website where he is selling his two most recent albums on cassette of all things…

If there was one thing that John Frusciante sought out to prove in 2012 it is that he is going to do whatever he darn well pleases and no one is going to tell him otherwise.  That is exactly how he comes across on his most recent studio album (the insanely-titled) PBX Funicular Intaglio Zone (henceforth referred to simply as PBX).  This album, coupled with the Letur-Lefr EP (QRO review) he released earlier this summer (even though Frusciante himself says differently) are really two halves of the same whole with their electronically infused vibe.  As with Letur-Lefr, Frusciante leaves his famed guitar in the dust in favor of the synthesizer.

There really isn’t much of Frusciante actually singing on PBX.  It is mostly made up of electronic soundscapes with a few groanings ("Intro/Sabam") here and there.  Quite frankly, if you are a longtime fan of John Frusciante’s solo work, PBX is eerily reminiscent of his highly controversial second studio album Smile From the Streets You Hold.

If you take away the vocals, the album’s second track "Hear Say" sounds like it belongs in a late ‘70s or early ‘80s John Carpenter movie.  It employs lots of interesting synthesizer sounds and couples them with live drums which gives an interesting close yet far effect to the song overall.

One of the album’s more odd tracks is "Guitar".  Before you go getting too excited thinking that there will be a ripping guitar solo that only Frusciante could pull off, don’t get too far ahead of yourself.  This song does feature guitar, but it’s run through so many effects that it almost sounds like just another synthesizer.  It’s not a bad song, again, just different from what one might expect.

Frusciante may have been onto something by releasing Letur-Lefr as an EP earlier this year.  His music is sometimes so out there that it becomes hard to digest as a full-length album.  That is why Letur-Lefr was so great, because it went by quickly and left you wanting more.  Perhaps making the whole thing a trilogy of sorts and releasing PBX as two more EPs would have been a better move.

Try as he might to distance himself from the highly produced and accessible sound he came to be associated with through his time in the Red Hot Chili Peppers, there is still something endearing and almost affable about John Frusciante’s music.  It’s definitely not for everyone, that fact is certain.  However, if you have followed him for any length of time and are relatively familiar with the rest of his solo catalogue then you will quickly see that this album definitely has a place with the rest in the crazy musical journey of John Frusciante.