<img src="http://www.qromag.com/wp-content/uploads/2012/11/joycethelibrariannov9.jpg" alt="Joyve the Librarian : Live" /><br /> Joyce the Librarian came to the welcome Bristol retreat of The Folk House.... 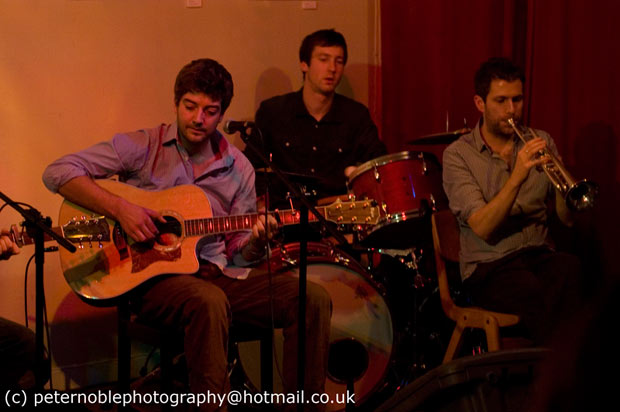 Tucked away from the hustle and bustle of Park Street in Bristol, The Folk House exists as a welcome retreat.  Blink, however, and you will miss the entrance to a small passage that leads through a vine-covered terrace to the venue.  During the day, it is an oasis for passers-by to sit and drink tea, sample unpretentious homemade food and take in a good book.  This bohemian ‘haven’ also acts as a place for trying something new; with evening courses offering everything from languages to art, pottery, dance, drama and music lessons, and even knitting! 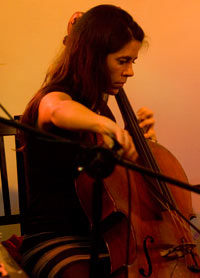 The ‘oozing’ of this rock ‘n’ roll ‘creative craziness’ is a fundamental trait adopted by the music venue, and was further evident as Joyce the Librarian came to play their final date in their short ‘jaunt’ across the U.K. on Friday, November 9th.  This night was the climax – a packed hometown show in front of new converts as well as those who are nearest and dearest to them.

This busy, little venue was full but comfy with the small bar continually working at full steam, handing out various local brews, building up a friendly, relaxed buzz of an atmosphere as the first band took to the front.

Cymbient were a very tight and well-received band, with traits of west coast America or Scotland’s very own Teenage Fanclub.  Either way, these chaps from Cardiff, Wales deserve checking out at http://uk.myspace.com/cymbient and hunting down their albums, The Drive Home (2005), Out On the Waves (2008) and their new album, I Saw Energy to be released in February 2013 (Folkwit Records).

Lavish psychedelia and catchy tunes throughout, again maybe suggesting some influence from accomplished bands such as The Brian Jonestown Massacre and Pavement (QRO live review).  Their set went down very well, and warmed up nicely a packed room that paved the way for their label mates, as Joyce the Librarian also on Folkwit Records.

Cymbient this night were: Andy Fung on guitar and vocals, Paul Battenbough on guitars and vocals, Tom Raybold on bass and Steve Prior on drums. 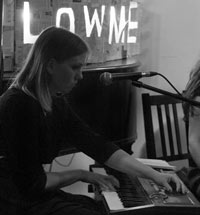 In a room with sparse lighting, cosy surroundings and tables laden with red wine and candles, a bank of paper lanterns sat on top of a grand piano.  This ‘light art’ was carved out with the words, ‘FOLLOW ME,’ (giving a nod towards Joyce the Librarian’s current single, “Follow Me, I’m Right Behind You”), and lit up with a warm orange glow, a small stage area strewn with the band’s instruments.

With a debut album just released, Joyce the Librarian were keen to treat everyone to a full sounding set with the regular members of Martin Callingham and Tom Van Ecker on acoustic guitars, Houdie on organ and Anna Strudwick on cello.  They were also joined by the excellent Andy Norman on drums and James Cornick on trumpet.

The debut album, They May Put Land Between Us, once heard, is awash with autumn colours and gentle snug songs, perfect for teasing away those cold evenings.  There is real variety throughout the album and tonight they had a large and captive audience, who were appreciative throughout the ten-song set.

Second song in, and the band played, ‘The Weight of the Line,’ from their EP released earlier in the year (QRO review), with Callingham and Van Ecker rolling repetitive plucking string patterns across the frets of their guitars.  There were added textures from Houdie’s harmonies and organ, and the bittersweet, sorrowful sound from Strudwick’s cello, yet all very pleasing to the ear and heart.

For the next song, Callingham brought the audience’s attention to his pretty ‘nifty cowboy shirt’, apologetically acknowledging his lack of ‘rock’ prowess.  This in true British eccentric style was added to by the Bristol band’s own version of a mid-western cowboy song.  Picture the sounds you would expect in a mid-west desert, surrounded by stars and the warm glow from an open fire, a place a million miles from this scene, then picture “A Dawn in Portland Square” (from the album), but still with the same beautiful sun.

Next up came the current single, “Follow Me, I’m Right Behind You”, a mesmerising and beautiful song to lighten any heavy heart with its perfect melodies.  The framing from the cello again adding a lush wrapper around a gorgeous track, which brought enthusiastic cheers at its conclusion.  Callingham was left to declare that he momentarily felt like Mark Knopfler (him from yours truly, Dire Straits).  Upon reflection, the main singer managed to shake himself from what he acknowledged were ‘thoughts nightmares were made of.’ 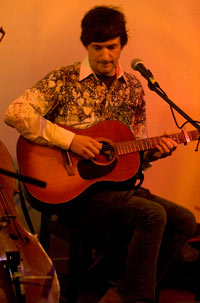 The rest of the set had songs of beauty and not a single scary ‘British rock band’ and dodgy head sweatband in sight.  Instead the room was filled with acoustic folk sounds of melancholy.  “Traps” (from the debut album) gave Houdie the opportunity to stretch her lungs with impressive choir-like vocals over the top of the strumming marching of Martin Callingham and Tom Van Ecker’s acoustic guitars.

Next up was the splendid “Maurice Ward”, from the LP (apparently a homage to the amateur scientist/hairdresser).  The track again gave James Cornick on trumpet the opportunity to show again, just how all the instruments on display fit perfectly together.

As more gigging tales were shared on this last night of the tour followed by giggling from band and audience alike, what had gone on in the back of the ‘tour bus’ (a Ford Galaxy) surfaced.  At one point, ‘hummus’ was found to be peppered around the inside of the vehicle, and on another wild occasion, a certain band member had four sugars in their service station coffee…  They were swift to share with us that they were halves and not full teaspoons.  Phew!

All too soon the finale of the set was reached with the uplifting, “When the Wood Comes Down”, from The Weight of the Line EP.  With it’s steady beats from the accomplished Andy Norman, purposeful guitars and overlapping organ, this song with an extended instrumental intro, highlighted something created with care and showed us what is to come from this band.  The contrasting song ending, added finishing touches to a very enjoyable evening.

An unexpected encore followed, with a cover of Texan and Country-folk songwriter, Townes Van Zandt’s track, “I’ll Be Here In the Morning”, finally ending a successful evening.  The room gradually emptied with satisfied, smiling people, leaving for their busy, hurried lives outside.  Until the next opportunity to come away again, and feel the healing and uplifting gentle sounds that Joyce the Librarian bring.

Judging by the whirlwind of 2012 for the band that has seen gigs, festivals, an EP released, national airplay on various radio stations, a support slot for Euro’s Childs and a cracking debut album, Joyce and the Librarian are clearly in for a smashing 2013, that deserves further and wider recognition to bigger audiences, because once their music is experienced, as everyone did tonight, you will feel better and enriched for it. 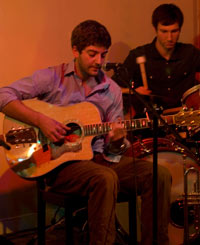 Atoms
The Weight of the Line
A Dawn in Portland Square
Follow Me, I’m Right Behind You
Land
Traps
Maurice Ward
Over Dinmore
Turn Yourself In
When the Wood Comes Down
Encore
I’ll Be Here in the Morning (Townes Van Zandt)

http://www.youtube.com/watch?v=Y9EZrHnctUU&feature=plcp “Follow Me, I’m Right Behind You” – Official video

http://joycethelibrarian.bandcamp.com/album/the-weight-of-the-line (Link to the EP.) 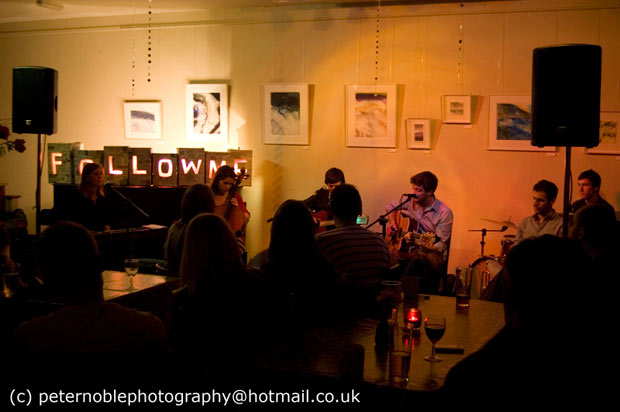