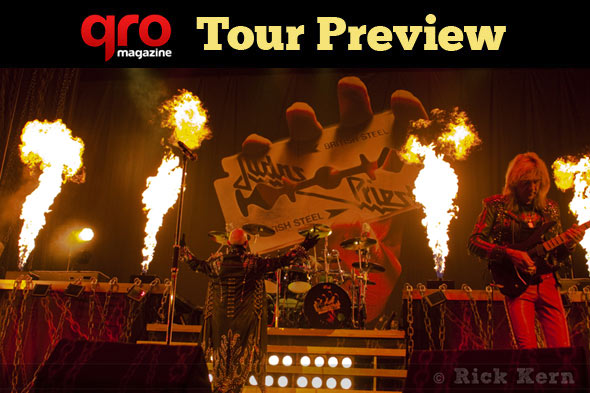 "Are you ready from some Priest-style heavy metal!?!"  So singer Rob Halford announced before "Eat Me Alive" on the iconic metal act’s 2009 A Touch of Evil (QRO review) live album.  Well, you better be ready, as Judas Priest are headed out on their ‘Epitaph’ world tour – their last world tour, ever.

Begun back in Birmingham, England back in 1969 (bassist Ian Hill is the only founding member still in the band, following the recent retirement of guitarist K.K. Downing), Judas Priest were part of the great uprising of hard rock in the seventies.  But they soon evolved and essentially helped found what has for decades been known as simply, ‘heavy metal’ – indeed, they were rated the second Greatest Metal Band by MTV (behind only Black Sabbath), and the cult documentary Heavy Metal Parking Lot was of fans waiting to see Judas Priest.  They’ve endured the heights of fame, the heights of infamy (including a 1990 trial for giving subliminal messages to commit suicide), epic splits & reunions (like Halford’s own 1992 departure & 2001 return), and more, but the group has continued, in one line-up or another, since their start – until now.

"I think it’s time, you know.  We‘re not the first band to say farewell, it’s just the way everyone comes to at some point and we’re gonna say a few more things early next year, so I think the main thing that we just want to ask everybody to consider is don’t be sad about this, start celebrating and rejoicing over all the great things we’ve done in Judas Priest."

– Halford on the end of Judas Priest

Judas Priest commemorate their career with The Chosen Few, a compilation of their work, with each track chosen by a heavy metal contemporary, from Ozzy Osbourne & Alice Cooper to James Hetfield & Slash, out October 11th.  The final Epitaph tour begins the day after at AT&T Center in San Antonio, and crisscrosses North America all the way into December:

Click here for photos of Judas Priest, at start of final North American tour, at AT&T Center in San Antonio, TX on October 12th, 2011 in the QRO Concert Photo Gallery

Click here for photos of Judas Priest at Nikon at Jones Beach Theater in Wantagh, NY on July 12th, 2009 in the QRO Concert Photo Gallery

Click here for photos of Judas Priest at Nikon at Jones Beach Theater on August 10th, 2008 in the QRO Concert Photo Gallery 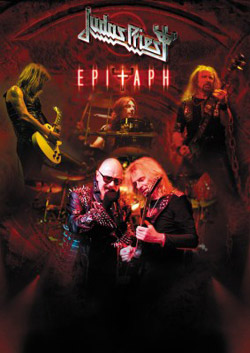