House of Vans reopened for Julian Casablancas + The Voidz.... 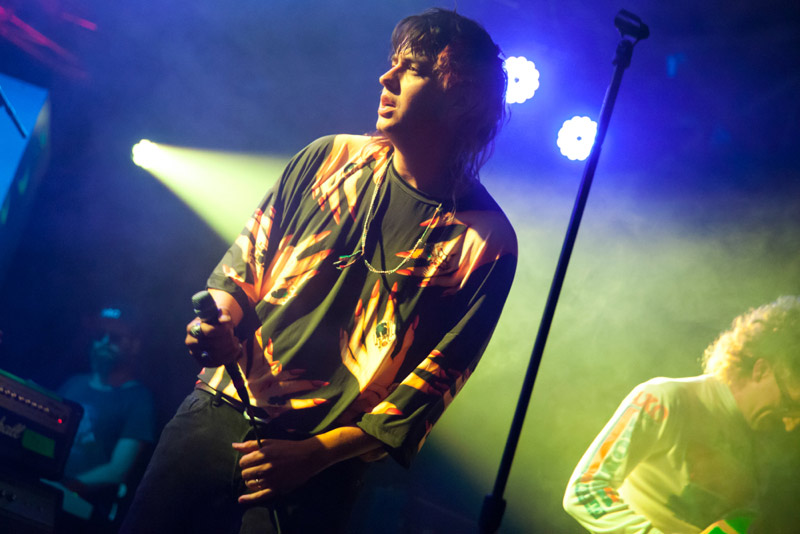 The free summer show season in New York has waxed and waned in the past handful of years, as the Wall Street crisis and government sequester has reduced support for events such as River-to-River Festival, but new school private enterprise has grown as a sponsor, particularly with the House of Vans (QRO venue review) in Brooklyn, which established itself a few years ago as one of the best series of the summer. That’s not just because of the free beer on hand, but also because it eschews the highbrow, old skewing acts of the traditional park venues such as Central Park SummerStage (QRO venue review) and Prospect Park Bandshell (QRO venue review), instead bringing artists as young as the people who wear Vans sneakers. Earlier in 2015, Vans threw three ‘Almost Summer’ events, with The Julie Ruin (QRO live review), Parquet Courts (QRO live review), and Pusha T (QRO live review), but the name of the series alone promised a full regular season of House of Vans events.

Except those events didn’t come – until well into August, Thursday the 13th, with Julian Casablancas + The Voidz, Cherry Glazer, and a carnival. 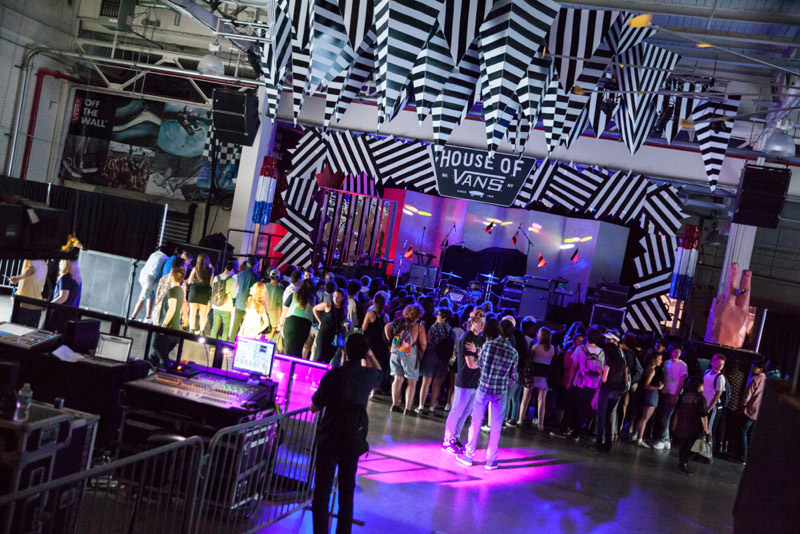 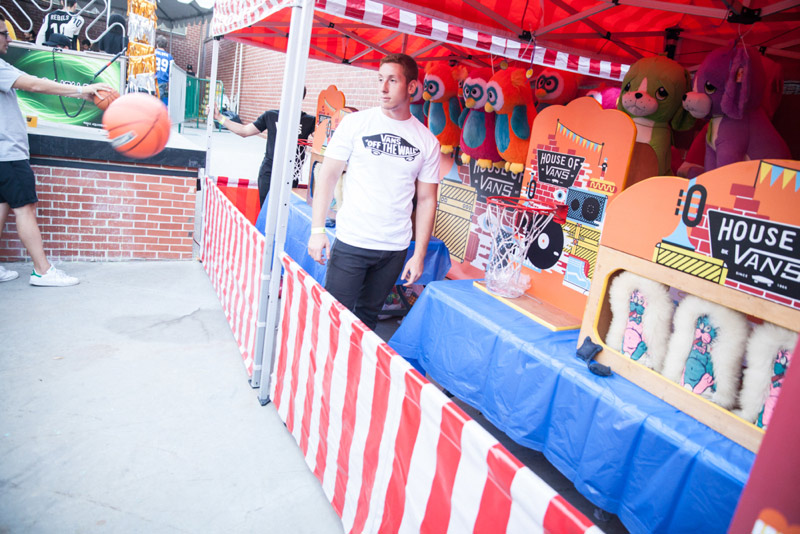 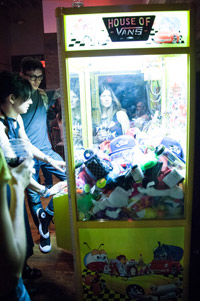 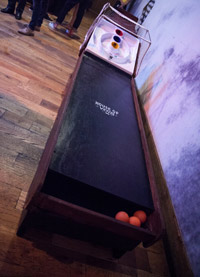 Perhaps Vans saved up their money from not throwing anything in July or most of June, because House of Vans was decked out to the nines (well, as much as a warehouse-and-sometimes-skate park could be). There was an art installation by Ken Farmer (of Nuite Blanche New York), and carnival games & décor that made the place feel like the carnival from an eighties flick (or, with the streamers above and inflatable air dancer man, a car dealership opening). Games included an 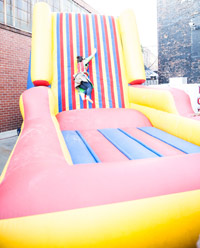 inflatable Velcro wall and more in the outdoor area, plus air hockey, 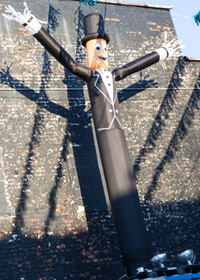 mini-skeeball, and free prize claw in VIP. There were also hot dogs, pretzels, and snow cones in the outdoor area – for purchase with food tickets, which unfortunately couldn’t be won in the games, despite being sold in the same set of booths. The free beer was also classier, 312 Goose Island, though the free wine in VIP wasn’t so hot (yeah, so sad…). Your correspondent did also spy Syd Butler in VIP – bassist for Les Savy Fav (QRO live review at House of Vans) and Late Night with Seth Meyers (QRO Music on Late Night TV), plus head of Frenchkiss Records (and husband of Blue Bloods’ Amy Carlson). 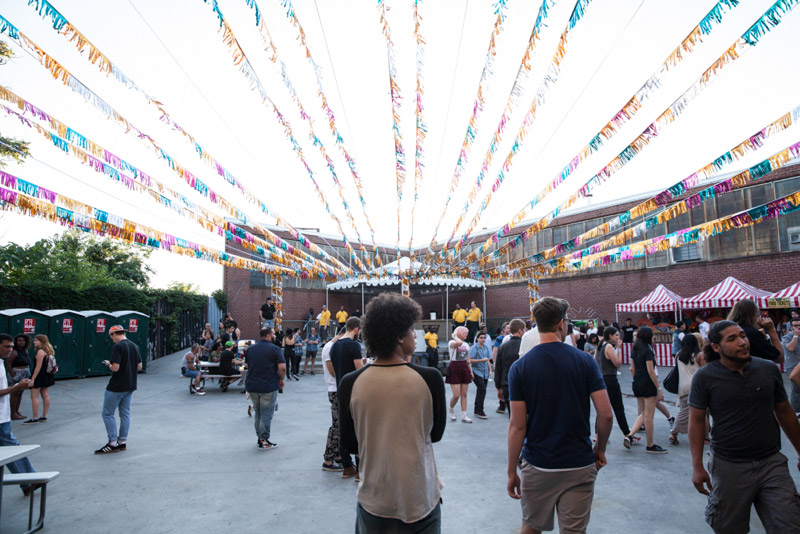 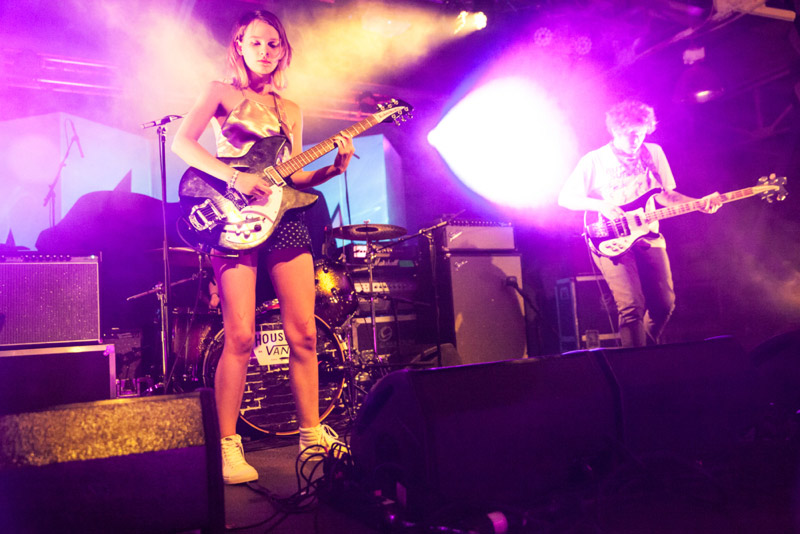 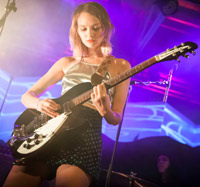 A line stretched well down the block when doors opened at 7:00 PM, and the place hit capacity (or at least doors closed) shortly after 8:00. With only two acts and an 11:00 o’clock curfew, this gave more time for the large crowd to mill around, so it was great that there was stuff to do on the premises (besides drink). Opening up was Cherry Glazerr, a model-fronted Los Angeles act (singer/guitarist Clementine Creevy was in an episode of Amazon’s Golden Globe-winning series Transparent) who might still be in high school. But if they had the Xs on the back of their hands like many in the all-ages crowd, they probably still got drunk backstage. 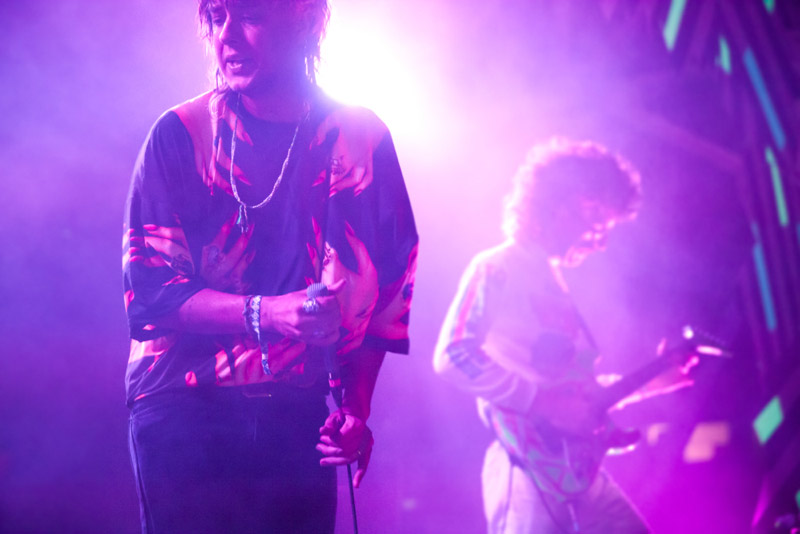 Those members of the audience with Xs on their hands – females, mostly, a change from the usually XY-dominated punk scene at House of Vans – were there for Julian Casablancas + The Voidz. Of course, we all know Casablancas as the singer/frontman for The Strokes, who brought NYC back on the alternative & rock map at the start of this century/millennium with Is This It, then proceeded to repeat themselves, break-up, get back together for a few more decent-but-still-underwhelming records (QRO review), and currently seem to flirt with another hiatus, before showing up to headline the odd festival (presumably the money is just too good). Casablancas has also done his own solo work, first with a truly underwhelming & forgotten solo album, Phrazes For the Young (QRO review), and more recently as ‘Julian Casablancas + The Voidz’ with Tyranny, a sonic mishmash of a release.

Casablancas + Voidz’s set had a similar mishmash feel, mix of artsy, rock, crowd-appeal and noise. Casablancas was an excited frontman, behind a nice artistic backdrop, and the crowd was celebrity-worship, seeing their favorite artist in a small space for free – there was lots of shrieking. Admittedly the sound system at House of Vans did no favors for the group, as between their noisier style and rough acoustics of the warehouse, anyone who wasn’t up front had trouble hearing what Casablancas was actually saying. Yes, he & his band did a Strokes song, but it was a relatively obscure one, “Vision of Division”. And yes, a fan did climb up on stage, only for Casablancas to protect him from security – but they guy overstayed his welcome (and took off his shirt), and was eventually removed. 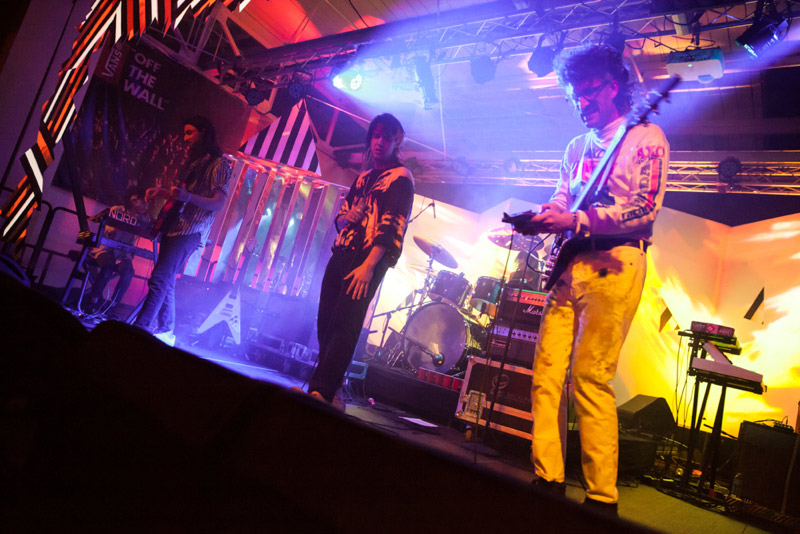 Word is that House of Vans will have at least two more events, sort of ‘It’s Almost Still Summer’, as the season slowly gives way to autumn. One of the best summer music spaces/series returned in an excellent fashion.