Julian Casablancas : Phrazes for the Young 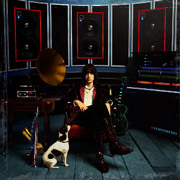 Has time passed Julian Casablancas by?  While this decade isn’t (quite) over, and we don’t yet have the full hindsight of history, an argument can be made that The Strokes’ 2001 full-length debut Is This It? was as significant to alternative music as Nirvana’s Nevermind or The Sex Pistols’ Never Mind the Bollocks – perhaps even more so, as the grunge and punk scenes that followed those two were only in the popular consciousness for a short period before settling outside the mainstream, while today’s alt-rock seems to be much more successfully piercing that barrier (the movement’s greater age, and the accessibility-raising, major label-destroying power of the internet both have had a lot to do with that as well).  For whatever reason, Is This It? inaugurated a flowering of indie-rock in this decade/century/millennium, on the fringes, the mainstream, and everywhere in between, seeing the birth of new venues & festivals alongside a million new bands (and the rise of Williamsburg).

But whatever happened to the actual Strokes?  2003’s follow-up, Room on Fire, felt like a complete retread of Is This It?, while 2006’s First Impressions of Earth was criticized as a vain attempt to not be like Is This It?.  After Earth, the band went on a hiatus, which saw guitarist Albert Hammond Jr. release two solo records, and bassist Nikolai Fraiture & drummer Fabrizio Moretti both start-up side-bands, Nickel Eye & Little Joy, respectively (Moretti also found time to date actress Drew Barrymore, until their break-up in 2007).  Singer Julian Casablancas & lead guitarist Nick Valensi have supposedly been writing new Strokes material that the band’s been recording this year, but the release date for the new album keeps getting pushed back & back.  And now Casablancas is out with his own solo record, Phrazes for the Young, which sees another Stroke fall further & further behind.

Not that Phrazes is ‘bad’ – The Strokes never put out material you couldn’t listen to.  It’s just that you were disappointed in them, first as an overeager fan-boy, but later as an exasperated mother, who really did just want to see them grow up & realize the greatness you’d once seen in them.  But Room on Fire just made you wonder if The Strokes were a one-trick wonder, and First Impressions of Earth led you to start doubting even that one trick.  You may have fond memories of Is This It?, but when was the last time you actually listened to it?

It may seem unfair to speak so much about The Strokes (and especially Is This It?) when reviewing the solo album from one member, even if it’s the most prominent one, and it’s the last side release before their scheduled end-of-hiatus this summer, but isn’t that what drew you to Phrazes in the first place?  And after listening to it, the record isn’t going to make any new imprint.  Casablancas follows the Is This It?/Room on Fire-to-First Impressions of Earth trajectory of trading guitar-jangle for electro sounds, while he turns that electro more poppy.  The results are mostly forgettable, whether done as dance-cheese (“11th Dimension” & “”Glass”) or relaxed (“4 Chords of the Apocalypse”, “Ludlow St.” & “Tourist”).  Phrazes does improve when Casablancas utilizes some of the push which made Is This It? singles like “Hard To Explain” so winning, but “Left & Right in the Dark” & “River of Brakelights” still just feel like sub-Strokes, or sub-sub-Is This It?.

You could say the indie-rock world owes a debt of gratitude to Strokes like Casablancas for making this decade possible, but that doesn’t mean you grade his solo work on a curve any more than Bollocks made you like Jonny Rotten/Lydon’s Public Image Ltd.  Who knows what the new year might bring, it may even bring a revitalized Strokes, but Phrazes makes no one Young again.