Originally formed in 1998, Junip consists of Elias Araya on drums, José González on vocals and guitar and Tobias Winterkorn on organ and synth.  Their music shines with influences of the 1960s and ‘70s generation, sans the electric guitars.  In an interview with Chicago Now magazine, they claimed to record all their music digitally, transfer to a tape recorder and mix with an analog sound system in a recording studio in Gothenburg.

In an interview with The Examiner, González stated that most his songs are crafted from hours of jam sessions.  The group would gather, record and improvise on just two chords and later go back and re-listen to their session to elaborate and see if any of the newly created songs stand out.

The new album Fields took eleven-plus years to release and has been raved about all throughout indie music blogs.  The vintage combination of organ synths, folksy guitar and African rhythms make this album a perfect go-to for any occasion.

Junip is currently on tour: 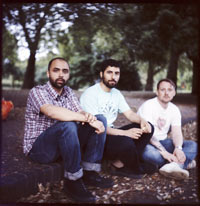