Kaiser Chiefs : Start the Revolution Without Me

<img src="http://www.qromag.com/wp-content/uploads/2012/04/kaiserchiefsstarttherevolution.jpg" alt="Kaiser Chiefs : Start the Revolution Without Me" /><br /> Not <i>Revolution</i>ary, but Kaiser Chiefs can still deliver some decent Brit-rock. ... 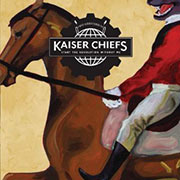 After delivering a big Brit-rock debut in 2005 with Employment, Kaiser Chiefs were love Less & Less on follow-ups Yours Truly, Angry Mob (QRO review) and Off With Their Heads (QRO review), but two things made the band’s return from hiatus last year significant – one intentional, one not.  The riots that hit Great Britain reminded many of Employment‘s great “I Predict a Riot”, while the band’s return The Future Is Medieval was twenty digital tracks, of which fans could pick ten to ‘make their own album.’  After a fourteen-track physical release (and a twenty-track digital deluxe/vinyl edition), The Future finally comes to North America as Start the Revolution Without Me – a decent album from a band that was only great once, a long time ago.

Click here for photos of Kaiser Chiefs at Leeds Arena in Leeds, U.K. on September 13th, 2013 in the QRO Concert Photo Gallery

Click here for photos of Kaiser Chiefs at 2012 Groovin’ The Moo in Bunbury, WA, Australia in the QRO Concert Photo Gallery

Click here for photos of Kaiser Chiefs at 2011 Main Square Festival in Arras, France in the QRO Concert Photo Gallery

Only one of the songs on Revolution is entirely new, single “On the Run”, though prior Future single “Kinda Girl You Are” was only on the physical, not any of the digital, releases of Medieval.  There’s a bit more electro on “The Run” and at times on Revolution, though the record suffers from the same fate as everything the band has done, post-Employment – “Kinda” forgettable.  Kaiser Chiefs aren’t the worst Brit-rock outfit out there (by far), and are more alt than all of many, many the Oasis wanna-bes (including Beady Eye…), but only a few tracks on Start are truly that interesting, primarily the more relaxed and cheeky (the latter effect something that the band has been missing since Employment) “Cousin In The Bronx”, and the more distant and echoing “Child of the Jago” (these two gave titles from their lyrics to Start the Revolution Without Me and The Future Is Medieval, respectively).  But otherwise, there’s just some decent Kaiser Chiefs rock (singles “Little Shocks”, “On the Run”, and (radio edit) “Man On Mars”, plus “Problem Solved”) and some stabs outside of their wheelhouse (Caribbean drumming to “Heard It Break”, ditty on “When All Is Quiet”, and odd slow-disco “Things Changed”).

The Kaiser Chiefs were never actually Revolutionary (forgive the pun), and that’s only become more apparent over time.  But they can still deliver some decent Brit-rock.

MP3 Stream: “Cousin In The Bronx“