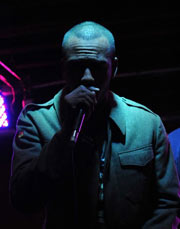 The Atlanta-based rap artist KidSyc describes his latest release, The K.I.D., as "not quite an album, but much more than a mixtape."  The honest lyrics, reckless freestyles, and occasional braggadocio keeps the production firmly grounded in southern hip-hop mixtape culture, while a few tracks, including the standout "Die", could be a hit anywhere.  On "Different", KidSyc challenges the listener to "Find a rapper you can call me worse than / With better flow, rhyme schemes, and awesome wordplay".  The flow is impressive, the thoughtfulness and substance of the lyrics even more so.  In ten tracks KidSyc exalts, entices, entertains and shows rap the way out of a mindless booty beat wilderness into the twenty-first century.

Opener "Die" floats a cool brass loop over a breezy beat while KidSyc ruminates on mortality between breathy, haunting choruses.  The tempo heats up on "Fire" and quickens on "Golden Void" as deft rhymes are unleashed with Mortal Kombat-esque velocity.  Producer Alex Goose keeps the mix fairly clean throughout The K.I.D.  KidSyc’s flow doesn’t require a lot of fancy dressing; his mic skills provide all the fireworks.  Nowhere is this more apparent than on the two tracks "Hold The Line Freestyle" and "Spaz_Freestyle".  The rapper turns his talent loose spouting off-the-cuff freak-outs about yellow submarines, Salvador Dali, and supreme pizzas.

"Syc’s Back" and "Victory" busts out the braggadocio.  The ‘comeback’ and ‘triumph’ themes have been tried-and-true rap staples since before LL Cool J’s "Mamma Said Knock You Out".  You can’t quite swallow "Syc’s Back" because he hasn’t been here for years.  But The K.I.D. has got something special that could lift him up above an already exceptional hip-hop scene.  If Lloyd ‘KidSyc’ Harold continues his upward trajectory, combing thoughtful rhymes with slick beats, he might be a lot closer to "Victory" than people know.