“This box set represents us at the very beginning of our career, and documents the band’s early success and subsequent growth.”... 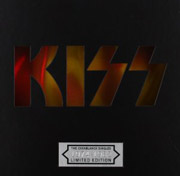 “Even I hadn’t heard of some of this stuff, but this is all part of our master plan to celebrate KISS at this milestone in our careers,” says Gene Simmons.  “This box set represents us at the very beginning of our career, and documents the band’s early success and subsequent growth.”

Introducing the fantastic multi-disc box set jam-packed to the brim with brilliant riffs and classic sounds from one of the most prominent American rock bands of the ‘70s, best known for their black and white face paint, classic singles, and flamboyant stage outfits and performances that would capture audiences worldwide.  Meant for the true KISS aficionado, this box set of singles contains a collection of early hits spanning over a period of eight years, documenting their stay with Bogart’s label; Casablanca.

Click here for photos of KISS at State Farm Arena in Atlanta, GA on April 7th, 2019 in the QRO Concert Photo Gallery

Click here for photos of KISS at Cynthia Woods Pavilion in The Woodlands, TX on August 31st, 2014 in the QRO Concert Photo Gallery

KISS have been awarded 28 gold albums to date in their long career and have sold over 40 million albums in the United States alone.  Following the release of their 20th studio album, Monster, every single within The Casablanca Singles box set embodies everything that made KISS what they are today.  Through releasing this box set, along with their latest album, they show themselves at the top of their game whilst simultaneously donning the make up and ‘going back to their roots.’

There are two versions of the box, one containing the 29 CD singles and the other containing 29 of the seven-inch vinyl record versions.  These 29 singles were the tracks that KISS originally released during the early years with Casablanca; however often many of these singles had entirely different mixes, edits and material that didn’t ever appear on their vinyl records.

You’ll find some well known and much loved tracks such as: “I Was Made for Lovin’ You”, “Love Gun”, “Snow Blind”, Rock n’ Roll All Nite”, “Beth” and “Detroit Rock City” – these will have you reminiscing and laying down the moves with your air guitar.