<img src="http://www.qromag.com/wp-content/uploads/2009/10/loneydearoct3.jpg" alt=" " />Emil Svanängen (a.k.a. Loney Dear) and his band didn't let anything get in the way of giving an engaging, enchanting show. ...

On the second leg of his U.S. tour to support Dear John (QRO review – his fifth album, and first for Polyvinyl), Loney Dear is touring with label mates, Asobi Seksu, a shoe-gazy noise pop rock duo, comprised of Yuki Chikudate (vocals, keyboards) and James Hanna (guitar, vocals) from New York, as well as fellow Swedish singer/songwriter Anna Ternheim, who’s been highly touted by the Swedish equivalent of the Grammy awards, winning Best Newcomer in 2004, nominated for Best Female Artist, Best Lyricist and Best Songwriter in 2005, and awarded with Best Female Artist and Best Lyricist in 2006.

Portland’s stylish Doug Fir/Jupiter Hotel complex boasts a scene featuring anything a guest could want – even a tattoo parlor.Â  The vibe was vastly different from Loney Dear’s last low-key appearance here, which was on a Thursday back in May.Â  Not only are Saturdays the Doug Fir’s busiest night of the week, there was a wedding reception taking over much of the establishment this time around.Â  The van full of wearied Swedes pulled up to the crowd of customers at about 7:30 PM, half an hour 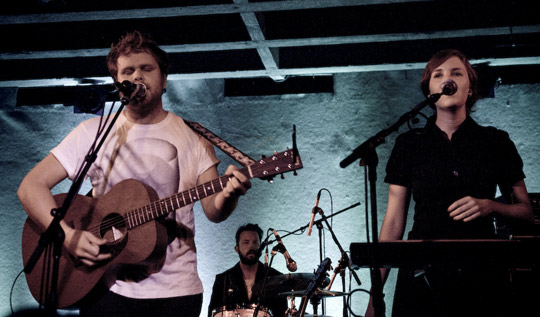 before the door was scheduled to open.Â  The crew diligently unloaded their gear and scrambled to do the soundcheck, while the doorman kept the happily buzzed fans waiting for another hour.

Finally at about a quarter to ten, Anna Ternheim opened the night’s delectable pop showcase, backed by SvanĂ¤ngen’s band.Â  The venue almost reached its full capacity for the second act, Asobi Seksu, who provided the adrenaline for the evening, sandwiched between the two more subdued sets.

It was closer to midnight before Loney Dear took the stage. The band was comprised of Samuel Starck (keyboards), Ola Hultgren (drums), David Lindvall (bass) and the sole female, Malin StĂĄhlberg, who was absent at the prior show in May.Â  StĂĄhlberg has been contributing backing vocals on all five Loney Dear albums.Â  Along with providing ethereal harmonies for SvanĂ¤ngen’s falsetto, StĂĄhlberg multi-tasked with percussion, keyboard and guitar, filling in the lush layers of Loney Dear’s music.Â  With their calm demeanor and frequent smiles, one would have never guessed the turmoil they went through to get to Portland.

Loney Dear opened the set with one of the lighter tunes from his darkest album to date: “I Was Only Going Out”.Â  Starck’s keyboard and SvanĂ¤ngen’s vocals quietly warmed up the crowd’s ears, inviting additional subtle tiers from the rest of the band, before exploding into a kaleidoscope of sounds, then descending to a soft whisper.Â  Loney Dear dived into two more songs from his latest album: “Everything Turns to You”, a darker paced tune with a hint of nervous energy and perhaps the most poppy song from Dear John, “Summers”, which shimmers with bright chords and characteristically melancholy lyrics.

Loney Dear playing “Everything Turns To You” live at Doug Fir Lounge in Portland, OR on October 3rd, 2009: 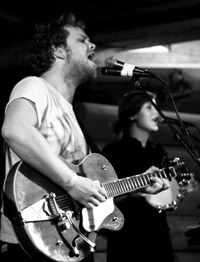 Little stories and expressions of gratitude in between songs are an integral part of the concert going experience; SvanĂ¤ngen’s candor and Swedish accent certainly played favorably.Â  SvanĂ¤ngen took some time to talk to the audience about how amazing it was to be in Portland after the long drive from San Francisco and complimented Doug Fir’s chef for the trout, before retreating to his third album (Sologne) with the dance club rhythm of “Le Fever”.

SvanĂ¤ngen asked for “a little more squishiness” from the audience before treating them to the first single from Dear John, “Airport Surroundings”.Â  Next, the band plunged into one of the highlights of the entire show, “Under a Silent Sea”.Â  For nearly seven minutes, the song morphed into various shapes and sizes; it took you from heaven to hell and back again.Â  At one point, three of the band members were behind the keyboards.

Loney Dear playing “Under the Silent Sea” live at Doug Fir Lounge in Portland, OR on October 3rd, 2009:

After the tumultuous musical ride, SvanĂ¤ngen asked the audience to provide backing vocals.Â  Singing together with his fans has become a staple of Loney Dear’s shows.Â  In May, it was “Ignorant Boy, Beautiful Girl”.Â  This time it was, “The Meter Marks OK” from the Loney, Noir album (QRO review).Â  The band continued seamlessly with the majestic and heart-wrenching “Carrying a Stone” from the same album.

SvanĂ¤ngen took a breather and talked more about Portland, Oregon: how it is one of his favorite cities, yet during his internet research of ‘Portland’, Portland, Maine came up #1 with a population of 65,000 and Portland, Oregon came up second.Â  Later, when he replaced the word “hope” with “Maine” during the opening line of “Sinister In a State of Hope”, the crowd somehow missed the humor.

The evening would not have been complete without the song “Violent”, which SvanĂ¤ngen considers to be one of his proudest musical achievements.Â  The song is the perfect marriage of unbearable beauty and hidden menace – a captivating muse that will put you in an unbreakable spell.

For the encore, Loney Dear chose to prepare the crowd for a good night’s sleep rather than an all-night party. “Shivering Green” from his second album (Citadel Band), was SvanĂ¤ngen’s first farewell song of the night.Â  The final song of the set wasn’t “Saturday Waits” or “I Am John”, perhaps the two of the best known tunes in the Loney Dear catalogue.Â  Instead, SvanĂ¤ngen launched into the lullaby “Dear John”, which he claimed was a challenge for his vocal range the night before.Â  This time he shivered a little in the beginning but finished the song with a vow and left the crowd wanting more.

Savoir Adore : In the Wooded Forest