<img src="http://www.qromag.com/wp-content/uploads/2010/04/lookmexicotobedtobattle.jpg" alt=" " />Is emo-punk (finally) growing up?  Look Mexico have, into the accomplished sophomore <i>To Bed To Battle</i>. ... 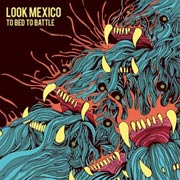 Is emo-punk (finally) growing up?  Lately, the much hipster-hated genre has seemed to be putting out some far more accomplished material than its over-youth would indicate.  There’s the evolution of workingman’s punk like Lucero (QRO album review) or Red Collar (QRO album review), which at its best can be as honest and evocative as emo-punk tries to be.  And there seems to be stronger instrumentation and out-and-out skill cropping up, such as with Florida’s Look Mexico on their sophomore release, To Bed To Battle.

Yes, opener "You Stay. I Go. No Following" has a kind of emo-plead-punk nature, but also the workingman’s punk honesty, and is memorable, even evocative.  Somehow, the band manages to scratch those raw emotions that emo only wishes it could, thanks to backing it up with interesting instrumentation and rhythm.  Look Mexico are as complex as the existence they detail on "No Wonder I’m Still Alive", "I Live My Life a Quarter Mile At a Time" and "Just Like Old Times".  They even are able to lift up emo-storytelling, making it involving and emotional, not overwrought & overdone, on "Time For You To Go Do Your Own Thing".  It’s not quite your whiney teen suddenly producing Catcher In the Rye, but he is maturing.

Look Mexico also produce some variety on To Bed To Battle, in the speedier "They Offered Me a Deal (I Said No, Naturally)" & "Get In There, Brother!", plus the alt-country strums "Take It Upstairs, Einstein" and "Until the Lights Burnout?".  The speed adds some catch to the first two, but they would have been better served had they not been back-to-back on the track list.  The downbeat alt-country numbers, while not as strong as the band’s bread-and-butter, are far superior to most emo-punks going acoustically heartfelt and trying to recreate Green Day’s "Time of Your Life".

Emo-punk is quite easy to write off as just a new way for teens, that have too much time on their hands & too little life experience or musical experience, to moan about their problems and attempt to be ‘rebellious’.  But the kids are growing up in a world less safe & comfortable than in any other time in a hipster’s memory.  So who are the really whiney ones?…

MP3 Stream: "Time For You To Go Do Your Own Thing"

{audio}/mp3/files/Look Mexico – Time For You To Go Do Your Own Thing.mp3{/audio}
Tags
Look Mexico
Categories
Album Reviews
OLDER ARTICLE