Man Man let it all hang out in a wild show at Brooklyn Masonic Temple.  The ‘Viking-vaudeville’ act is known for their crazy, out of control sets, and on Friday, April 11th, they didn’t disappoint.  Playing mostly off their latest release, Rabbit Habits (QRO review), dressed in all white (including Native American war paint), they rocked the Temple (QRO venue review) like it never has been rocked before.

Even before their first note, Man Man had the crowd in a fever, thanks to the band’s ‘unique’ choice in house music before their set.  Over the speakers, The Beach Boys’ ubiquitous “Kokomo” ran over and over again on a loop, about half-a-dozen times, enough to make you hate the ultra-lightweight number.  But that was nothing compared to what came next: twice as many repeated spins of the one and only “Don’t Worry, Be Happy”.  Bobby McFerrin’s a cappella tune is grating on the first listen; twelve times is enough to make you want to throw yourself off a cliff.  Every time it would end, the audience would hold its collective breath, and when that familiar whistle would start up again, cries went out.  Yet, in deep spite of oneself, one couldn’t help but move to the oh-too-catchy piece.  Apparently, the band chose that house music – it certainly made everyone very glad when they came on.

And Man Man definitely started with a bang, opening up with Rabbit Habits’s strong leadoff track, “Mister Jung Stuffed”, followed by the record’s second song, the almost-anthem, “Hurly / Burly” (in general, the Rabbit pieces played better than those of two prior records, though “Banana Ghost” of 2006’s Six Demon Bag, with its ‘snake charmer’ melodica, was also a standout).  Most shows, it takes a while for the crowd to go crazy, to work up into a frenzy, but at the Temple, they began that way.  Man Man’s music plays to that, thanks to the frenetic drumming of Pow Pow (Christopher Powell) and the aggressive singing and honky-tonk piano of Honus Honus (Ryan Kattner).  And the fact that both are positioned right up at the front of the stage only adds fuel to the fire (reminiscent of another piano-and-drums band who sits up at the front and whose fans are crazy from the get-go, Matt & Kim (QRO interview).

Things got a little too drum-heavy in the middle, after “Banana Ghost”, but Man Man brought it all back home with Rabbit’s strongest track, “The Ballad of Butter Beans”.  Honus was in full force, first with the cartoon-like slide whistle, then disappearing to put on some sort of shiny spangle-smock.  The latter half of the night saw him running up and down his side of the stage, playing instruments one’s never even heard of.  Pow Pow also got a chance to show off on drum solos, to the point where the rest of the band would just step away from their instruments, and take a breather. 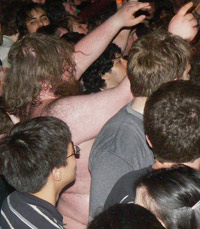 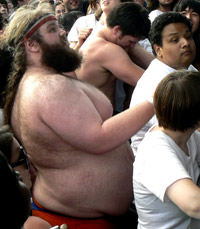 The crazy pit of people front and center on the stage floor was wild and swaying, but didn’t really have that disturbing, ‘dangerous’ edge one usually finds with such things.  Girls and guys were both in there (though yes, males were more numerous – but what else do you expect at a Man Man show?…), and even the bearded, overweight, shirtless guy didn’t put things off (see right).  A similar pit emerged when the band played McCarren Park Pool last summer – including the same big fella (who then didn’t even have to start the show with his shirt on – see right).  Man Man had played Bowery Ballroom (QRO venue review) the night before, and one can only wonder whether the sometimes heavy-handed security there (start taking a video of the band and see what it gets you…) would have allowed such things.

Man Man stepped off stage for a minute, before returning for an encore, but that encore itself, the sad sing-along “Doo Right”, wasn’t much longer.  But they – and the crowd – could be forgiven for being tired out: the balcony upstairs was literally damp with the heat and sweat that had come off the crowd and risen up in the high-ceilinged venue, before condensing in the more sedate balcony (though even there, a few fellas took their shirts off).  Just as Man Man is a band like no other, and so is there music, so was the show.