<img src="http://www.qromag.com/wp-content/uploads/2009/05/manchesterorchestramean.jpg" alt=" " />Manchester Orchestra embrace the heart in their throat on the sophomore release, <i>Mean Everything To Nothing</i>. ... 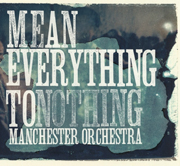 Atlanta’s Manchester Orchestra debuted strong a couple of years ago with I’m Like a Virgin Losing a Child (QRO review), and opening for then burgeoning southern alt-stars Kings of Leon (QRO album review).  But the band always seemed a bit of an ill fit in the alt-stream, despite joining fellow Southerners Annuals (QRO spotlight on) on tour (QRO review).  The group had a little more heart & emotion (especially lead singer/guitarist Andy Hull), along with straightforward guitars, drawing more from the mainstream.  Now, with their follow-up, Mean Everything To Nothing (like Virgin, released on their own label, but distributed by Sony’s Canvasback), Manchester Orchestra embrace who they are, a choice that starts off very strong, before tailing at the end, but is definitely a wise one.

Though at twelve tracks (including a hidden one at the end), Everything is heavily front-weighted, with the first half-plus (seven) songs standing out far more than the rest.  From “Shake It Out” to “I Can Feel a Hot One”, Manchester Orchestra somehow manage to capture what’s good about rock ‘n’ roll’s heart, without getting overbearing.  Whether it’s the darker grind of “Shake”, country-rock of “I’ve Got Friends”, metal thud of “You, My Pride & Me”, catch on “In My Teeth”, scream-plead of “One Hundred Dollars”, or the “Hot” torch “One”, the band’s emotion works impressively, lead by Hull’s vocals and guitar.

Unfortunately, things seriously cool off after “A Hot One”.  It’s not so much that Manchester Orchestra finally mess up and come out overwrought (though that does appear on the penultimate “The River”).  The band just goes bigger without getting better, leaving songs like “My Friend Marcus”, “Tony the Tiger”, and “Everything To Nothing” relatively forgettable (the semi-titular track is also hurt by the fact that the preceding “Tiger” also uses that line).  While peppering those tracks in amongst the first half-plus might have thinned that great portion, it probably would have given those pieces some needed freshness.

Manchester Orchestra does vary their sound a bit, at the beginning & end: opener “The Only One” has some seventies country-fried rock, and even a touch of brightness, while hidden track “Jimmy, He Whispers” is just that, sad and stripped (though can bands stop hiding songs by extending the second-to-last track and putting in a huge space of silence?  It’s annoying on a CD, and a pain to fix on your iTunes…).  But it’s really the band embracing who they are that Means Everything (even if that’s also got a bit of Nothing).