It was a wild night when Matt & Kim returned to New York to play a free show – with free booze.The Brooklyn-based duo hasn’t played their (adopted) hometown in what seems like forever, but they came back in style, thanks to the good folks at Black Swan Wine.  The corporate sponsorship didn’t just mean that the Wednesday, May 28th show at the 70 Greene Street space in New York was free, but that the booze was free too!  And, even for a Matt & Kim show, things were out of control.

In some key respects, this could have been a different sort of Matt & Kim show.  For one thing, it wasn’t in Brooklyn: the keys & drums pair began playing house parties in the Borough of Homes and Churches, and last year, they played everything from Village Voice’s Siren Music Festival on Coney Island (QRO recap) to a DIY show in an abandoned auto body shop (QRO photos) thrown by Brooklyn concert impresario Todd P.  They even played last year’s opening of Bowery Presents’ Music Hall in Williamsburg (QRO venue review), and closed out CMJ 2007 there (QRO recap).  But 70 Greene is in the über-trendy SoHo shopping district of Manhattan, and the space serves as an art gallery as well.

Also, thanks to the Black Swan sponsors, this was a 21+ show – and Matt & Kim are a band with a lot of underage fans.  And they are usually the craziest at their shows, from running up on stage to hug Matt (QRO photo) to crowd-surfing and wearing a Mexican wrestler mask (QRO photo).  Plus, the online RSVP was only posted that day – even famed indie blogger Brooklyn Vegan didn’t initially include the event in his listings of what was going on Wednesday night (though the comment section was dominated by discussion of it).

However, the night was anything but a ‘too cool for school’ hipster event, thanks to many factors: It was free.  There was free alcohol – and not watered-down beer, but your choice of Black Swan wine (and it was flowing for over an hour before Matt & Kim went on).  Even Matt & Kim’s ‘of age’ fans aren’t known for their sedate ways.  There was some pent-up anticipation, as it had been oh so long since New York had seen them.

songs, security approached the stage and asked Matt Johnson to tell people to stop crowd-surfing, Matt replied, “You can tell them that – I’m not going to tell them that.”  The security person did, warning that if it continued, he’d shut it down, and almost sparked a riot – only Kim’s well-timed reminder that everyone was getting free booze lifted spirits.

But the quintessential Matt & Kim moment came with only two songs left, as Matt outright told the crowd to ignore the earlier warning (crowd-surfing had stopped after that) and go crazy – which they did:

There were, of course, some flaws in the evening.  The place was a tight fit, and if you weren’t into being pushed by the crowd and having to hold up surfers, you had to make your way to the sides or further (though what are you doing at a Matt & Kim show, then?).  Wine might have been the worst choice of an alcoholic beverage to go with the event – one drinks it like beer, but it hits you like hard alcohol.  What’s more, the drinks were served in dark glass glasses, with no place near the stage to set them down; it’s amazing no one was hurt by shards of broken glass.  And Matt & Kim only played for just under thirty minutes – and since time flies when you’re having fun, it felt like much less.  They only did about three-quarters of their set list (QRO photo), skipping such classics as “Frank” and “5K”.

But the band certainly made the most of the time that they had.  After opening with an 80’s synth theme song, they jumped into the wonderful “It’s a Fact (Printed Stained)”, and a new, excited number, “Cut Down”, which did play pretty quick.  People were even going crazy during instrumental “Grand”, after which security made their announcement, but even the lack of crowd-surfing didn’t diminish “Yea Yeah”.  Matt & Kim managed to fit in the first song they ever wrote, “I Wanna”, something they hadn’t played in years, as well as a version of “Verbs Before Nouns” superior to that on their 2005 CD-R debut EP, To/From.  Matt & Kim consistently drew from all ends of their songbook, from “I Wanna” to To/From to 2006’s self-titled LP to new material, ending with a new piece and To/From’s “Silver Tiles”.

All things considered, it was really amazing how well everything worked.  No one was hurt, nothing was broken, the security didn’t do anything but warn verbally, the free event was well attended but there wasn’t some incredible line, the wine was good (and didn’t run out), and the 21+ crowd weren’t too old to have fun (or too drunk to have too much fun).  Less than a week before, Black Swan & 70 Greene Street hosted another free show by another young, fun band (albeit one with many more members), Ra Ra Riot (QRO spotlight on), but, unfortunately, no more concerts are scheduled in the future.  Thankfully, Matt & Kim will be playing three different shows in New York on the weekend of July 12th-13th (QRO Concert Calendar) including two with The Circle Jerks in the “F Yeah” tour, and a free concert with The Breeders at McCarren Park Pool (QRO venue review) as part of Pool Parties (QRO Festival Guide).  Those are sure to be great, with Matt & Kim trying to top themselves – again. 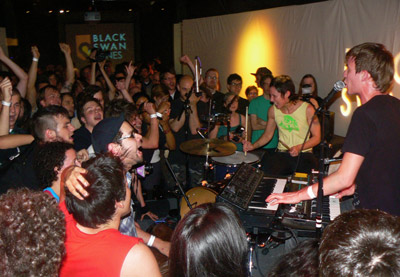