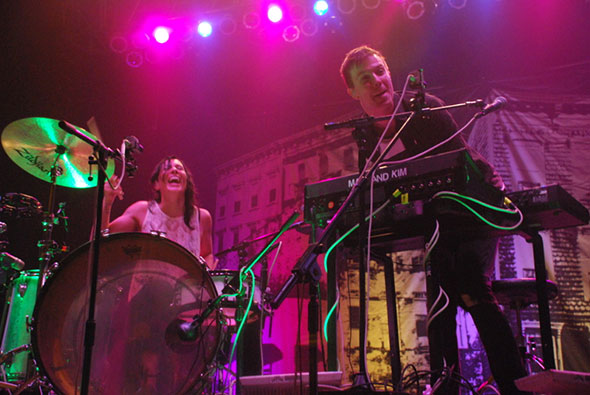 What do you want to do on New Year’s Eve?  You wanna party!  Well, bringing the party in spades to New York on December 31st, 2011 was Brooklyn’s own Matt & Kim, who played their longest show ever, and their last for a while, at Hammerstein Ballroom.

Click here for photos of Super Mash Bros. from this show in the QRO Concert Photo Gallery

Matt & Kim are a young (in age) outfit, and certainly have a young fan base – New Year’s Eve being on a Saturday night this time ‘round definitely helped their turn-out.  Still, among the excitable kids there were also a higher number of older fans than you might have expected (they didn’t have to work the next day…), and even quite a few (of any age) that were dressed well, as befitting a New Year’s Eve party.  The hordes did make for a long line to enter (though not as long as their last NYC show, for the Windows Phone – QRO photos), and even though that line moved relatively fast on the unseasonably warm December evening, it did mean many missed most of first opener Body Language and their electro-Caribbean sounds.  But there were many in Hammerstein for main opener Super Mash Bros., and even if watching three guys work computers isn’t the most exciting visual spectacle (especially as they were half-behind a wall when doing it), the sonic mash-up artists did provide something to see on the jumbotrons both in front of them and above them, including videos of Gwen 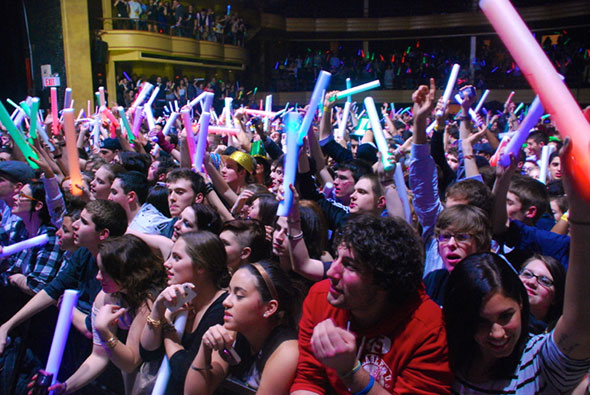 Stefani ("I don’t know what a ‘Hollaback Girl’ is, but I know I want her dead" – Family Guy‘s Brian) and Lady GaGa in underwear in women’s prison, plus Mischa Barton & ever-reliably bisexual Olivia Wilde making out on The O.C. (though the Bros. didn’t play the actual song that accompanied that scene on the show, Bell X1’s "Eve, the Apple of My Eye" – QRO Music of The O.C.).

Click here for QRO’s review of Matt & Kim at House of Blues in Boston, MA on December 9th, 2011

But that was just prelude for the main event, which was also preceded by the handing out of foam glowsticks (or "light up dildos," as Kim called them) throughout the crowd.  Matt Johnson and Kim Schifino bounded onto the stage and launched into "Block After Block" and "Red Paint" from 2010’s Sidewalks (QRO review), with Johnson asking the crowd to "Jump" – as in the Kris Kross hit single from 1992 – in between.  Before the clock struck twelve the singer/keyboardist also had his drummer/girlfriend stand on her stool so he could get a "last serious viewing of Kim Schifino" in 2011 – and a last ass-smack, after which she replied, "If that was the last ass-smack, we are not doing 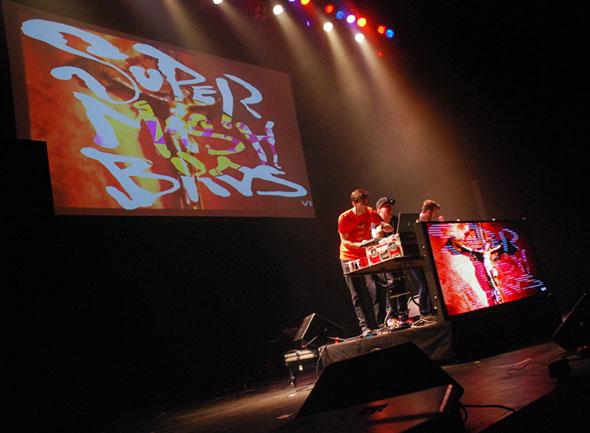 New York City fuckin’ right, Matt…" (Johnson fit in another before the ball dropped).  They also played Sidewalks‘s "Wires", plus classics from their self-titled 2006 debut full-length "It’s a Fact (Printed Stained)" and "Lightspeed", as well as "Good Old-Fashioned Nightmare" and hit single "Lessons Learned" from 2009’s Grand (QRO review).  Indeed, the duo scheduled it so that "Lessons" would be the final song that they’d play, and that the audience would hear, in 2011.

Johnson introduced "Lessons" by saying, "I’ve learned a lot of lessons in my life – and one of those lessons is taking your motherfuckin’ clothes off in Times Square right up the street only helps your career…"

Photos of Matt & Kim at Hammerstein Ballroom on Halloween ’09

There was unfortunately no stripping that night at Hammerstein, but fortunately the venue on 34th Street was just far enough away from Times Square to avoid the packed crowds of tourists & police, though it was still a bustling 34th Street that night.  Also, the rather notoriously hard-to-deal with venue (QRO venue review) was much looser on New Year’s Eve, including far less of a drink line than you might have feared (one benefit of an all-ages show…) – and the annoying New Year’s noisemakers (before there was the vuvuzela…) were silenced by the time the headliners came on.

Matt & Kim only took a momentary breather after the end of 2011, before starting 2012 with Sidewalks‘s "Good For Great" and "Silver Tiles", then Grand‘s "Cutdown" and "Turn This Boat Around" – along with Johnson saying that Schifino "might look even finer in 2012" (and giving her the first ass-smack of this year…).

The duo ran off the stage saying, "We’ll see you in a minute" – only to reappear at the opposite end of Hammerstein, right beneath an ultra-excited balcony.  They played some bars from "Biz Markie’s "Just a Friend", with Johnson telling the crowd, "New York, I’ve said it before & I’ll say it again – you’ve got what I fuckin’ need!" [note: he said the same thing to Boston in their prior show – QRO video].  Matt & Kim hit up Matt & Kim‘s always-affirmative "Yea Yeah", plus Sidewalks‘s ode to the "Northeast" and Grand‘s "I Wanna" – "About how I want this show to never end".  Schifino also told everyone to lift up anything they had that lit up (including joints…), challenged the crowd in the back to go as nuts as those up in the front had been doing, and remarked, "I’m just now seeing what I looked like in the fuckin’ screens over there and it looks like I’ve got a fuckin’ comb over – and none of ya’ll told me!…"

Matt & Kim did return to the (front) stage for Sidewalks‘s "Cameras", and then Johnson asked Schifino to do her now-standard crowd-surfing booty dance ("at least five people in"), though he said the dance might go into retirement, making this possibly the last Kim Schifino crowd-surfing booty-dance ever.  After she shook her ass-et and returned to the stage, the audience demanded that Johnson also shake his moneymaker while they hold him aloft, but Schifino told them, "Guys, let’s be honest here – there’s no way Matt can do what I fuckin’ do!  Seriously, let’s not fuckin’ embarrass him, come on…"  But Johnson did get his own booty dance with Schifino right at the front of the stage, before the pair closed out their set with Grand‘s "Daylight".

Of course, the crowd wanted yet more, and Matt & Kim did oblige by coming back out once more, this time dressed in New Year’s Eve formal wear – Schifino was wielding cymbals like shields (or like someone in the marching band), and Johnson crowd-surfed in his tux.  They then had two long, thick rainbow rows of balloons finally come down upon the audience, and finished the night with a V-J Day style Times Square kiss. 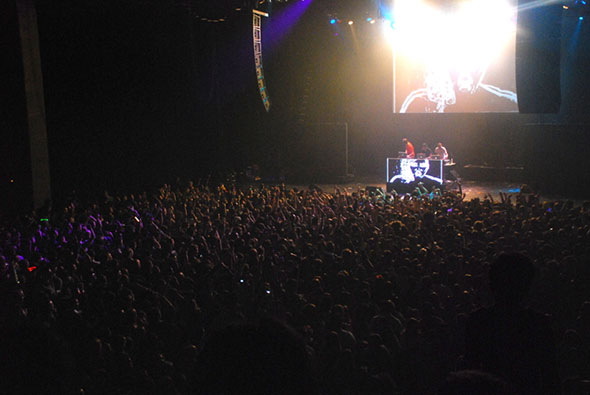 During the evening, Johnson did tell the crowd that the pair were taking the next six months off to work on their new record ("the longest time we’ve ever taken to make a record"), and after a super-busy 2011 that included South-by-Southwest (QRO recap), Sasquatch! Festival (QRO recap), and the Honda Civic Tour with Blink-182 (QRO album review) and My Chemical Romance (QRO photos), Matt & Kim could use some time away from the road, no matter how exciting they are live.  Johnson also told the crowd that this show was, "The longest set we’ve ever played in the history of Matt & Kim," but that it was so much fun the time flew by like it was the shortest – and they closed out 2011 with just what you were looking for: a motherfuckin’ party.

Inspired and the Sleep – “Running”