The wettest Pool Party yet - and likely forever - saw a down-home hootenanny thanks to The Felice Brothers, Langhorne Slim, and Eli 'Paperboy' Reed....

The wettest Pool Party yet – and likely forever – saw a down-home hootenanny thanks to The Felice Brothers, Langhorne Slim, and Eli “Paperboy” Reed.  After this year, Brooklyn’s McCarren Park Pool (QRO venue review) is getting converted from a large outdoor venue back into the community pool it once was (using funds generated from its service as a venue).  That means an end to the shows at the Pool, including the free Pool Party concerts every Sunday afternoon (QRO Free NYC Concert Schedule).  But the Pool Parties are going strong, right up until the end, even when competition and the weather don’t cooperate, thanks to some strong line-ups, like at the third-to-last on August 10th.

The weekend of the 8th, 9th, & 10th was jam-packed in New York City, from the All Points West Music Festival (QRO Festival Guide) across the river in New Jersey (QRO photos) to the massive 88 BoaDrum even on Williamsburg Waterfront, not to mention the start of The Olympics in Beijing.  Any ‘standard’ event, like the Seaport Music Festival show (QRO live review) at South Street Seaport (QRO venue review) on Friday, or the Pool Party shows, faced the prospect of diminished crowds.

The Sunday Pool Party didn’t face as tough competition as Friday’s Seaport show, with no 88 BoaDrum or insane Chinese opening ceremonies, and the APW headliner on Sunday wasn’t Friday & Saturday’s Radiohead (QRO photos), but the far, far inferior Jack Johnson.  However, McCarren had to face something South Street hadn’t – a bad rainstorm.  The weather has always been a risk at the open-air Pool Parties, having marred shows by huge Brooklyn acts like The Hold Steady and TV On the Radio (QRO live review).  It didn’t diminish turnout two weeks ago at the massive MGMT show (QRO photos), but between the rain being as bad as it’s ever been, plus the competition from other sources, the turnout was down this time. 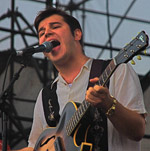 But those who skipped the Pool Party missed out on one hell of show!  First opener Deer Tick cancelled, but Eli “Paperboy” Reed persevered with some rockin’ big-band blues.  The Allston, Massachusetts musician was backed up by The True Loves (featuring members from Allston’s own big-name ska band, Skavoovie & The Epitones), and delivered some old school soul reminiscent of older Pool Party acts, like the Rabbit Soul Factory Revue (QRO photos) and Ponderosa Stomp (QRO photos).  With rain falling, Reed didn’t get the crowd he deserved, but those there couldn’t say he wasn’t good.

The skies darkened after Reed ended, with the rain coming down hard as fans flocked to whatever cover they could find.  But, whether it was good fortune or a smart hold-off by Jelly NYC (the organizers of the Pool Parties), by the time Langhorne Slim took the stage, the rain was off – and wouldn’t return.  Touring on the back of this year’s self-titled record (QRO review), this was the second time this summer that Slim (and his backing band, The War Eagles, graced Brooklyn with a free show, after hitting up Sound Fix Records (QRO venue review) in June (QRO photos).  Slim’s blues veered more towards rockabilly country with Langhorne Slim tracks like “Restless”, “Diamonds and Gold”, and “Hummingbird”, but the troubadour also hit up some older pieces like “Mary” and the wistful “I Love You, But Goodbye”.  Slim returns to New York in October with a pair of (unfortunately not free) shows, including one (QRO concert listing) at Brooklyn’s own nearby Music Hall in Williamsburg (QRO venue review). 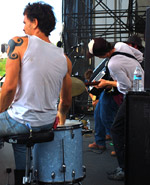 Headlining the Party was the one and only Felice Brothers.  This Appalachian roots-rock act (composed of three actual brothers, plus two honorary ones) has blown up in their last year, from playing a free show last September (QRO live review) at Bowery’s tiny Living Room (QRO venue review) to a sold-out Mercury Lounge (QRO photos) to Bowery Ballroom (QRO venue review) to now McCarren.  In town to play APW the day before (QRO photos), New York was lucky enough that the festival didn’t prevent their acts from doing other gigs across the river (like Metric, who played NYC (QRO live review) the night before playing APW (QRO photos).  While the band drew from their entire well of original material (not to mention traditionals), the set was primarily devoted to their own self-titled release from earlier this year (QRO review), including such standouts as “Radio Song”, “Frankie’s Gun”, and “Whiskey In My Whiskey” (a particularly apt tune, considering that the free Dewar’s in the VIP area didn’t run out until very late, for the first time this summer).

The end of August spells the end of McCarren Park Pool as a venue, with local legends-made-big Sonic Youth (QRO photos) closing it out (QRO concert listing), where last year they did Daydream Nation (QRO live review).  The Sunday before that, the similarly iconic & venerable Yo La Tengo (QRO live review) ends the Pool Party (QRO concert listing) – an event first announced in an article about the Pool in the ‘paper of record’, The New York Times.  Rumor has it that Jelly will be moving the Party to the Williamsburg Waterfront next year (Jelly was the one throwing 88 BoaDrum there on the Friday), but it can’t be the same.  Thanks for the music, McCarren – and thanks for the memories…

Paper Route : Are We All Forgotten EP

Wild Sweet Orange : We Have Cause To Be Uneasy