<img src="http://www.qromag.com/wp-content/uploads/2011/07/memorytapesplayerpiano.jpg" alt="Memory Tapes : Player Piano" />In this computer age when a musician can produce an entire album in his or her ‘bedroom studio’, there's a threshold... 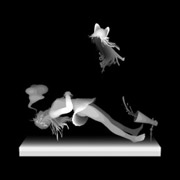 In this computer age when a musician can produce an entire album in his or her ‘bedroom studio’, there’s a threshold when it seems the machine overtakes the man (or woman).  Memory Tapes’ second LP, Player Piano, hovers in such brink.

Player Piano isn’t exactly a sophomore slump, but does fail to meet the expectations set up by Seek Magic.  The full-length debut from Dayve Hawk, the man behind Memory Tapes, successfully integrated nostalgia and modernity with intricate layers.  Field recordings such as the sound of basketball skidding on "Green Knight" provided refreshing organic quality and ingenuity to Seek Magic, unnoticeable in its follow-up.  While Player Piano still feels the same mold as its electronic pop precursor, Hawk has retreated behind a veil of machinery.

Hawk’s reticence often seems to get in the way of his production on Player Piano.  There are several moments that strive to be grand but falls short due to lack of layers.  Instrumental track "Humming" feels unintentional – more of an experiment than a statement.  "Sun Hits" is uncharacteristically cheery with beats that punctuate too clean and pronounced in a simple composition with keyboards infringing on tacky horror organs.  Paired with Hawk’s high voice, "Sun Hits" just doesn’t add up to an A-side recording.  At times, Yeasayer (QRO live review)-like tribal beats come in, as in "Worries".  The New Jersey producer/songwriter does play around with several interesting possibilities, but can’t help feeling he forgot to add few more elements to give his compositions enough dimension and texture to feel like they’re completed pieces – made by a human.

The two best tracks of Player Piano, "Wait In The Dark" and "Today Is Our Life", are placed back-to-back right after the short intro, "muiscbox(in)", giving the remainders feeling more like B-sides.  If the rest of the record exhibited the craft and detail of these singles, Player Piano may have been as enticing as Seek Magic.  The guitar solo on "Today Is Our Life" is the kind of risks Hawk needed to make his second LP stimulating.  The third single, "Yes I know", starts off promisingly with evocative somber keys.  But after the first verse, the high brassy keys, accompanied by flat, even beats kill the atmosphere.  The percussion evolves into a marching band style, while the keys escalate into a psychedelic carnival trip, which may work conceptually for the song, but musically it’s awkward.

To be fair, Player Piano is a very natural reaction to all the attention Seek Magic and its consequences have brought to a guarded insomniac like Hawk.  Despite several misses, Player Piano has enough intrigue-factor to be a record with longevity – you may not love it, but you definitely don’t mind it playing as you go about your daily routine.  But Hawk did get something very right – the visuals.  Checkout the fantastic cover art by Kazuki Takamatsu and equally mesmerizing music video for "Yes I know" by Eric Epstein.

MP3 Stream: "Today Is Our Life"