<img src="http://www.qromag.com/wp-content/uploads/2009/08/mewNoMoreStoriesSM.jpg" alt="Mew : No More Stories..." />Simply put: one of the most powerful and artistic rock albums of the year. ... 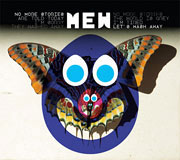 On their fifth album overall and first as a trio, Denmark’s Mew takes a massive leap forward with their razor-sharp, bombastic, and unique No More Stories/Are Told Today/I’m Sorry/They Washed Away//No More Stories/The World Is Grey/I’m Tired/Let’s Wash Away.  Throughout the album, art-rock blends with electronic psychedelics while shamelessly carrying some of the most clever melodies you’ll hear anywhere this year.

Beginning with the heavy, hallucination-inducing two-for-one "New Terrain" (reversed, it become a new track "Nervous"), No More Stories… is a complicated, but endearing effort.  The band displays exceptional technique throughout, especially when the infectiously quirky riff of "Introducing Palace Players" kicks in.  From there, the album cruises along twists and turns like the sun-soaked ballad "Beach" and the fierce "Repeaterbeater". The first act of the album is the most intense and opens the door for much more creativity.

After "Intermezzo 1", "Silas the Magic Car" starts the middle third on a delicate note that gives way to the desperation-loaded ballad, "Cartoons And Macramé Wounds".  "Hawaii" is the most stripped-down track on No More Stories… and nonchalantly skates along a xylophonic melody as the trio shows off more range than ever before.  "Vaccine" then features a ear-tugging gallop and "Tricks of the Trade" is a dark electro-romp that employs a hyper piano riff to segue into "Intermezzo 2".

Two tracks remain after the quiet wood-tapping "Intermezzo 2", and they fulfill the role of album closers admirably.  The sky-reaching intro of "Sometimes Life Isn’t Easy" dissolves into a meditative stomp before the band clears it up with a piano romp that features a forward-leaning rhythm and glorious choral bolstering.  As it finishes lightly with a heavenly piano/strings combination, the listener is left to ponder the journey the album and that song have just taken as it begins the final track, "Reprise". No More Stories… ends with a soaring post-rock atmosphere clearing into a tender guitar flicker.  The seemingly effortless precision in this segment finishes the entire album beautifully.

Hamlet references aside, there’s something amazing going on in Denmark, and Mew is it.  However exactly becoming a trio affected the band, their work has been more than positively affected.  No More Stories… is a fully-developed, wildly original collection of music that puts such a spin on "rock" music that the effects may be felt for quite a while.

Throw Me The Statue : Creaturesque