Richard Melville Hall, the man nicknamed ‘Moby’ by his folks, has many tightropes to walk.  His performance at the Crystal Ballroom in Portland, Oregon on Monday, October 19th was less rock theater, more Philippe Petit walking between the Twin Towers.  Less rave massive, more Cirque Du Soleil as metaphor.

Moby has a lot to reconcile, and he diligently attempted to do so throughout his almost three-hour set.  He is a man of many faces.  The Vans-wearing, vegan straight edge hardcore punk of the Ian MacKaye variety.  15 minutes as front man for art-noise confrontationalists Flipper (a claim that was later curtly reduced to something barely north of zero by members of the band, and Moby himself, in the documentary American Hardcore).  Downtown L.A. warehouse rave DJ pioneer.  Turn-of-the-nineteenth-century field recordings impressionist.  Blues breaker.  Deliverer of the Gospel.  Soundtrack composer.  More recently, Eno-ian ambientalist and Pink Floydian prog balladeer.  And then there are those elements of the Moby ‘brand’ he politely pulls the scrim in front of: Reluctant jingle writer for generations X and Y from Darien, Connecticut, one of the most affluent towns in these here United States, bedroom ‘burb to New York City. 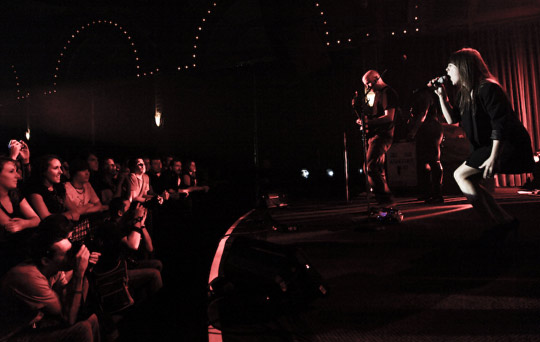 Moby has achieved what virtually no other modern day popular music artist has managed to do.  It is a feat virtually all modern day musicians can only dream of achieving.  He has managed to walk the highest wire of all as a twenty-first-century pop artist.  He tops the charts on iTunes and Soundscan, and he has disappeared in to the fabric of popular culture through every media outlet imaginable.  He figured out how to generate income off of his music in the age of the mp3, the bittorrent, and the peer-to-peer.  In doing so, practically wrote the book on the recurring revenue stream for the working musician.  He doesn’t make his money off of selling his recordings to you.  No one really makes money that way any longer, the labels included. 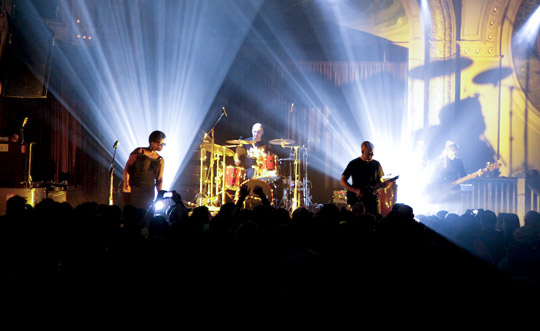 So what to do, Moby?  How are we going to set about walking all of these wires?  How are you going to get us to forget that we discovered "Find My Baby" while Tiger Woods was playing golf and selling us a credit card?  How are you going to remind us that "Porcelain" is not a cue to buy Bailey’s Irish Cream, but a simple yet eloquent paean to the pain of a love lost, as you sadly declare "Tell the truth / You never wanted me / Tell me"?

Petit once said of high wire walking, "You must not fall.  When you lose your balance, resist for a long time before turning yourself to the Earth.  You must not force yourself to stay steady.  You must move forward."  During the course of the proceedings, Moby certainly did not fall, and did a fine job of resisting the impulse to turn towards the Earth.  He might have, however, been forcing himself to remain steady a little more than he needed to. 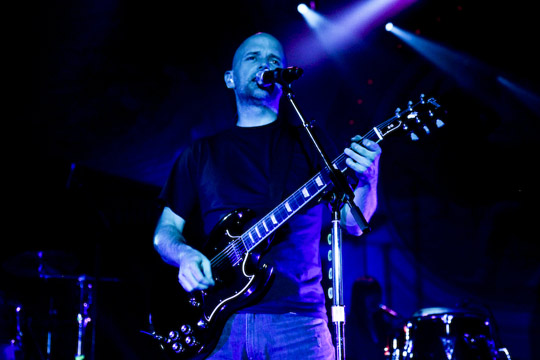 This slight exertion of force to walk the tightrope steady and true, this reconciliation of all of these tightropes he had to balance upon, came in the way of talking.  Moby likes to talk.  A lot.  And when you’re playing music for close to three hours, it can be something of a challenge as a member of the audience.  He was careful to remind us that "Bodyrock" was "just a dumb, big, over the top punk rock dance song".  His version of "Hey Portland!  Are you ready to rock?!" was a history lesson on the etymology of "Louie Louie" (written by Portland natives The Kingsmen), followed by a few bars of the standby song.  Apparently, as he would attest, "Porcelain" is not at all a heart-wrenching tale of woe, but a make-out anthem, as witnessed by him during a prior evening’s performance.   Near the end of the set, there was the thirteen-plus-minute version of "Honey", complete with a "Whole Lotta Love" and "War Pigs" medley, that began its life with an equally long monologue.  He offered an analogy about the night’s performance being a relationship, and "Honey" being a "drive across country for six months, in a broken down car where the car is constantly filled with exhaust, and it’s either the most fantastic experience of the relationship, or it just kills everything."  Witty, but it didn’t do much to prepare for the next thirteen minutes of classic rock psychedelic freak-out.

While it is understandable that he has all of these wires to walk, these plates to spin, these pins to juggle, the need to manage our expectations so carefully probably wasn’t all that necessary.  Because when Moby’s confounding Hermann Brain Dominance analyzer-organizer tendencies were set to standby, when the sticks clicked and the band played, the show was good.  Quite good.

Moby and his crack five-piece ensemble walked deftly and surely in lock step through the 20-some-odd-song set that was comprised primarily of material from his new album Wait For Me and Play.  The show opened on a meditative, ethereal note, with a block of four songs from Wait For Me, "A Seated Night", "Shot In the Back of the Head", the albums bare, resplendent title track, and "Mistake".  From there, he eased the tempo from a dream, to a sway, to a booty wiggle, as only a seasoned DJ can, kicking the insistent, gospel-tinged "Flower" through to the arms-aloft dance floor anthem "Go". 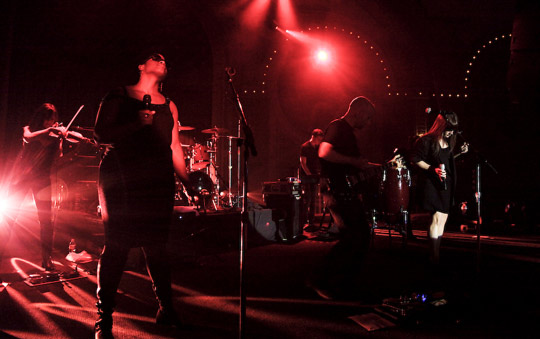 Enough cannot be said about a particular aspect live performance that Moby has embodied that many of his DJ-cum-rock band contemporaries have always seemed to lack:  He has a band, and the band actually plays almost everything.  When Moby employs a vocal sample culled from a field recording or an organically recorded female vocal, he doesn’t play the sample or recording from the stage.  He finds a singer worthy of its live reading, and has her sing it.  For this tour, those voices came in the form of the remarkable talents of Brooklyn-based Gospel vocalist Inyang Bassey and her Brooklyn neighbor, singer-songwriter Kelli Scarr.  Bassey and Scarr were the true stars of the show, from beginning to end.

On Play and Play-period material like "Flower", "In My Heart", and the epic "Natural Blues", Bassey not only recreated the urgent, cathartic and sometimes sad deliveries of those wonderful sampled vocals used throughout Play, she downright eclipsed them and made them her own.  Equally, on the older, diva-driven house jams, like set closer "Feeling So Real", she hit and sustained seemingly impossible falsetto notes. 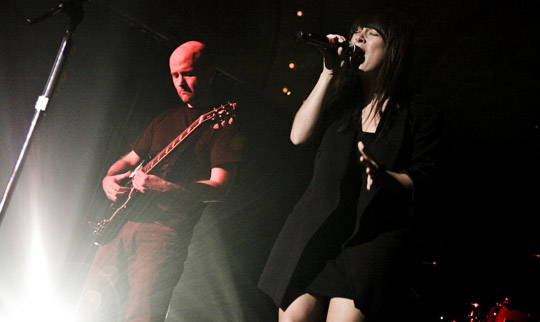 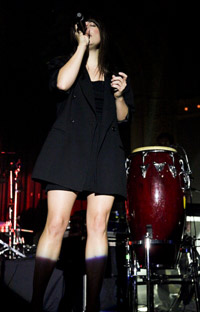 Scarr, the vocalist and keyboardist of the tour who appears throughout Wait For Me, was equally stellar throughout.  She transformed the lilting, waif-like, low-slung whisper of songs like "Wait For Me" and "Pale Horses" into goose-bumped towers of power when she took them to the stage front and center.  Those recorded performances belie her ability to shift from the sand-and-glue throatiness of a Cat Power to the gale force wail of a PJ Harvey.  Yet Scarr sounds like Scarr.  She does all of these things and throws her pitch-perfect pipes and soothing vibrato into the soup.  She oozes Brooklyn.  Hearing her sing, one can almost visualize her singing to herself in some small, dank, hot-and-cold brown running water apartment, with a hope to get out, a hope for something better.  She sang every song she took the lead on the way Jay Adams and Tony Alva skated the Dog Bowl in 1977:  like it was the last song she would ever get to sing.  This was clearly evidenced on the song Moby introduced near the end as "his favorite of all of the songs I’ve written", the mournful, plaintive "When It’s Cold I’d Like To Die" from Everything Is Wrong.  It’s a tall order to recreate the grandeur of Mimi Goese, and Scarr did not disappoint. 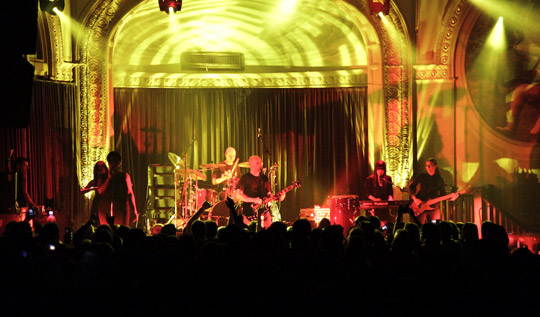 At a few points in the set, Moby turned on the electric blue spinning lasers and took and unexpected turn to the dark side of the moon.  "Jltf", with its slow ride cymbal four-on-the-floor, monolithic washes of analog strings, and quiet, introspective vocal, was pure Pink Floyd.

All in all, it was a fine evening of song and dance.  In the future, hopefully Mr. Hall will do a little less talking, and do more of what the title of his best known album would seem to ask him to do: play. 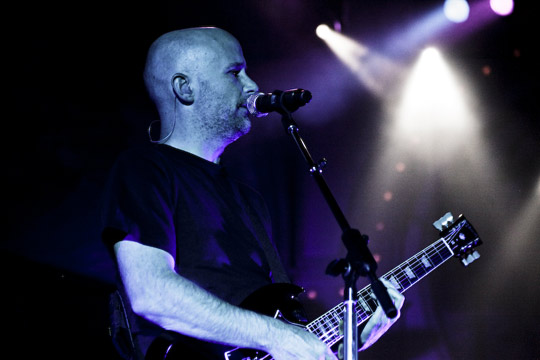