On Saturday night, the line outside Jannus Live in St. Petersburg, Florida was winding its way around the block.... 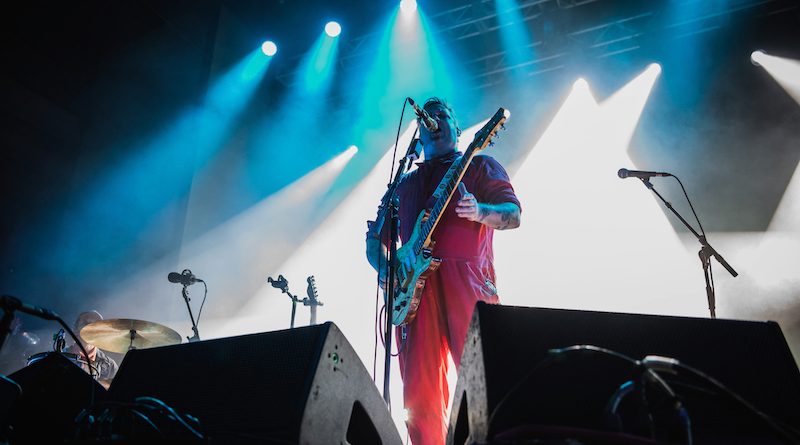 On Saturday night, October 16th, the line outside Jannus Live in St. Petersburg, Florida was winding its way around the block. Within an hour, the gates would open for indie all-stars Modest Mouse’s sold out show with Empath﻿ in the busy city. With fans from their teen years all the way to fans old enough to remember the first album release, the night was getting an early start as more and more filled in the sidewalk eager to get in.

Opening for Modest Mouse was American noise punk band Empath. The band first formed in 2015 by vocalist and guitarist Catherine Elicson, synthesist Jem Shanahan, and drummer Garrett Koloski while they were all roommates in Philadelphia, with second synthesist Randall Coon joining in 2017. The band self-released their first EPs Crystal Reality Vol. 1 and Vol. 2 in 2016, followed by Liberating Guilt and Fear and Environments in 2018 through Get Better Records. In the same year, the band also released their debut LP Active Listening: Night on Earth through Get Better Records once again, and after gaining so much positive perception, they signed to Fat Possum Records who then reissued the LP, as well as releasing a vinyl pressing of Liberating Guilt and Fear.

With the venue already packed wall to wall, the young four-piece took to the stage under a wash of blue and green lights. As soon as each member took to their instruments, Koloski began knocking out a beat as Elicson rocked straight into the set with her guitar. On each side of them, Shanahan and Coon joined in with their synthesizers as they weaved together their notes to the crowd in front of them. The band only had an hour to go with their setlist, and they spent every second of it serenading the venue. Looking into the crowd, the newly formed fans of the night were all rocking out along with them, with even the resident of an upstairs apartment looking down from their bedroom window in awe. The band finished out their performance with a flurry of movement and instruments before waving goodbye, as the stage began its transition for the headliner.

Photos of Modest Mouse at 2021 Shaky Knees in Atlanta, GA

Photos of Modest Mouse at The Roxy in Atlanta, GA on September 10th, 2017

Photos of Modest Mouse at 2014 Project Pabst in Portland, OR

Photos of Modest Mouse at 2014 Boston Calling in Boston, MA

Photos of Modest Mouse at Stubb’s in Austin, TX on November 8th, 2011

Photos of Modest Mouse at 2009 Music Fest NW in Portland, OR

It’s hard to find a person who has not heard of the legends Modest Mouse, as their influence as an indie band has had an impact on the genre for years. The band first formed in 1992 in Issaquah, Washington, when frontman vocalist and guitarist Isaac Brock met former bassist Eric Judy and current drummer Jeremiah Green. The trio released their first EP, Blue Cadet-3, Do You Connect?, in 1994 and by 1996, released their first full length album titled This Is a Long Drive for Someone with Nothing to Think About. Following these initial releases, 2000’s The Moon & Antarctica, 2004’s Good News for People Who Love Bad News, and 2007’s We Were Dead Before The Ship Even Sank (QRO review) all received multiple Platinum, Gold, and Silver certifications by multiple associations. The band then finally released The Golden Casket (QRO review) earlier this year in June, with their current tour named after the album. Along with Brock and Green, the band currently consists of Tom Peloso and Russell Higbee on bass and keyboards, Ben Massarella on percussion, and lead guitarist and backing vocalist Simon O’Connor.

Emerging from the smoke and spotlights, Brock and company took to the stage. In his bright red jumpsuit, Brock quickly grabbed his guitar as the band started into “Ocean Breathes Salty” from their 2004 album. With the entire front row jumping and screaming in joy, followed by cheers from the balcony and back of house, both the crowd and the band came together as they sang out for the opener. As they finished up their opener, the band then moved into “Fuck Your Acid Trip” from their latest release, followed by another heavy hitter “Missed the Boat” from their 2007 record. With the spiraling spotlights creating a halo behind each member, they soon moved into a mix of both old and new songs as they went through the set. As they neared the middle of the set, the band started out the first few notes of everyone’s favorite “Float On”, the lead single from the 2004 album. As soon as Brock started into the lyrics, fans in all areas of the venues gathered together, with some having joined arms, to join along with the song, while in some areas couples and friends danced together in an open space cleared by the crowd for them. The band then began finishing out their set, with more songs old and new alike once again.

As they ended their set, the band stepped off stage for a few minutes, as the crowd cheered out for an encore. Hearing their pleas, the musicians took back to the stage for a final four song encore. The group started out with “Black Cadillacs” from 2004 in the encore, and soon moved to “Never Fuck a Spider on the Fly” from this year’s release. Following these two songs, the band then started into another hit, “Dashboard”, from 2007. As the band started into the song, the entire front area of the crowd, under the dim orange light from the stage, began to jump in unison as they sang out together. With one song left on the set, the band played out with “The Good Times Are Killing Me” from 2004, before the lights soon dimmed and they waved goodbye.

As the band exited off the side of the stage, many fans gave a few last cheers and yells as Brock was swiftly escorted out of the venue, giving a quick wave to passersby before disappearing into the night, leaving the sold out venue to pour into the city with their hearts felt complete.