MONO are perhaps the hottest import from Japan since Eikichi Yazawa... or Pikachu, if you like. ... 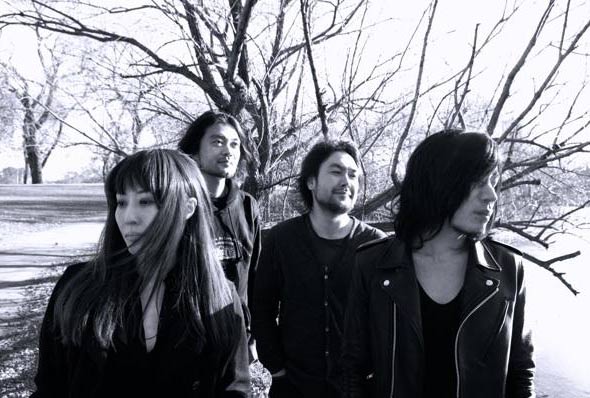 Click here for photos of MONO at Music Hall of Williamsburg in Brooklyn, NY on May 22nd, 2019 in the QRO Concert Photo Gallery

Click here for photos of MONO at 2014 Austin Psych Fest in Austin, TX in the QRO Concert Photo Gallery

Click here for photos of MONO at 2012 Le Guess Who? Festival in Utrecht, Netherlands in the QRO Concert Photo Gallery

Click here for photos of MONO at Babylon in Berlin, Germany on November 11th, 2012 in the QRO Concert Photo Gallery

Click here for photos of MONO at Koko in London, U.K. on June 7th, 2011 in the QRO Concert Photo Gallery

MONO may appear to be a quartet of meek mild manner Japanese youngsters, but MONO’s show at Cambridge’s Middle East on Friday, May 15th proved that the post-punk band are perhaps the hottest import from Japan since Eikichi Yazawa… or Pikachu, if you like.  Excitement from the crowd, sufficiently warmed from Scottish band The Twilight Sad (QRO live review), another tremendous band, self-described as “folk with layers of noise,” were perhaps a notably suitable choice of support act as those in the crowd prepared themselves for a spectacular show.

Simply saying MONO are a beautiful, instrumental post-rock band doesn’t really cut it – one must experience this band for yourself, in the flesh, to really understand how fine this band really are live.  With over an hour long set, the band set out to reach mind-blowing highs and wave-crashing lows, with a majestic culmination of musical artistry, stage presence and lights – not to mention a full-sized gong as part of their instruments.

MONO provided an intense set, much in line with their inception in 1999, but where in these early years MONO provided an almost atypical post-rock sound – atmospheric, reverb-y guitars, distortion and delay – a more classically-inclined sound was defined, notably in line with their latter releases, Walking Cloud and Deep Red Sky, Flag Fluttered and the Sun Shined, You Are There and current release Hymn to the Immortal Wind.  It is clear to see in over a ten year career, MONO have come a long way – a not just in the literal sense – and even though they may not receive as much recognition within their genre as other such bands, such as Sigur Ros (QRO live review), for instance- a forefront leader of pioneering post-rock to the masses – it doesn’t mean for a minute that MONO aren’t just as good.

Throughout their set, MONO painted beautiful, dynamic instrumental landscapes with an intense visceral quality that diversified in perpetuum.  With relentless crescendos which blossom into all-consuming emotions, MONO seem to hit the nail on the head in terms of pace, timing and seem to have a natural aptitude for adopting habitual sounds which draw in the listener.  It’s easy to get lost in MONO, in the way it seems to devour your being.

The audience, many who had seen MONO multiple times, was entranced by the energy.  With slight ‘moshing’, and a buzz of excitement, yet almost a level of concentration, the crowd were absorbed into the experience of seeing MONO in this intensely dark venue, only brightened by the blindingly bright flashing lights of MONO’s set.  Both the band and crowd maintained a level of admirable dignity – perhaps a sign of Japanese culture – but certainly one that is found far and few between these days, but most appreciated.

MONO are not just a band, they’re an experience.  They’re not an easy listen, or an easy experience – they are emotional, hard hitting, intense, real and pure, and an experience that is not to be missed by anyone.  This is real music.

Tift Merritt : See You On the Moon