<img src="http://www.qromag.com/wp-content/uploads/2009/09/monstersoffolkst.jpg" alt=" " />Four of the most acclaimed voices in alt-folk team up to make the biggest supergroup since The Travelling Wilburys. ... 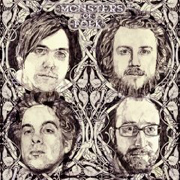 In the late ‘80s, Roy Orbison, George Harrison, Jeff Lynne, Tom Petty, and Bob Dylan formed to make the supergroup to end all supergroups.  The Traveling Wilburys, who might have had a long run if not for the unfortunate loss of Roy Orbison, came together to create something that has since failed to be captured in a musical group – until now.  Already legends in their own sense, the newly emerged quartet Monsters of Folk, which is the stellar line-up of Conor Oberst (QRO live review), M. Ward (QRO album review), Jim James (of My Morning Jacket – QRO live review) and Mike Mogis (of Bright Eyes – QRO album review), keeps with the musical camaraderie, bringing together the best and brightest of folk-rock.  Their self-titled debut album, released under immense expectations, has not failed to impress.

Monsters of Folk began when the foursome would sit in on each other’s sets, contributing improvised nuances to each other’s songs.  But the real blogosphere hype began with their cover of Bob Dylan’s “Girl From the North Country”.  The band’s natural presence and partnership signified the great things to come.

When meshing such distinctive sounds, there is bound to be a little stylistic domination.  MoF was careful to avoid stylistic credit on any of the songs, but the flavors of the songs betray their lightly veiled secrecy.  “Temazcal” and “Ahead of the Curve” are steeped in Oberst’s simple acoustics and moving poetry; the funky ambience of “Losin’ Yo Head” is obviously penned by My Morning Jacket’s Jim James; and M. Ward’s slow moving simplicity is splashed over “Sandman, the Brakeman and Me”.  It is the subtle contributions of the other musicians on the bases, however, that really put the polish on MoF’s debut and prevents Monsters of Folk from becoming a compilation.  Jim James’ innovative guitar work pushes along what could have become ‘just another’ Conor Oberst ballad, and M. Ward’s classic, quiet sound is revamped by added vocals and instruments.

It is the few songs where the origin cannot be placed that are the most intriguing.  Opener “Dear God (sincerely, M.O.F.)” is a floating, pensive beginning that would seem out of sorts for any of their individual projects.

While the band may have failed to create a completely original sound, it would have been unfair to ask them not to draw on the very talents they have already established and refined.  The significance of this album is how well the band works together to further highlight each other’s talents.  While Monsters of Folk was doomed to never live up to the hype, the album is a solid and commendable release.