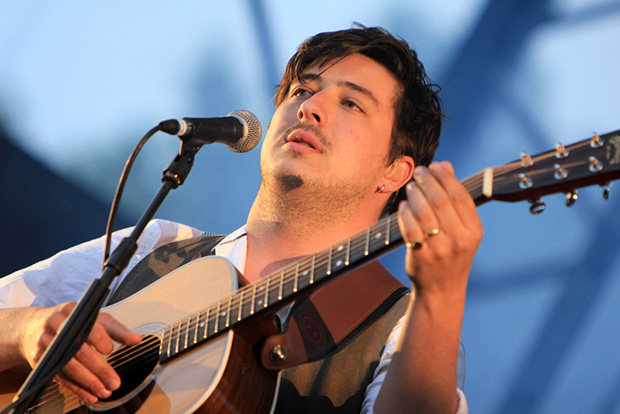 Click here for photos of Mumford & Sons at Louisville Waterfront in Louisville, KY on August 13th, 2012 in the QRO Concert Photo Gallery

Long flags with crossed pistols waving in the wind, facing Castle Hill in Greenhead Park, Huddersfield on Sunday, June 2nd.  Mrs. Mumford’s boys came bounding onto the stage to headline their Gentlemen of the Road Festival (QRO recap).  The diverse age range/fashion/genre loving crowd had their arms outstretched, screaming and clapping with delight as they took the stage.

Ben, Marcus, Winston and Ted stood in a straight line, evenly spread across the vast platform.  The rain hadn’t dampened any spirits although it gave it a good go!  But it stopped and didn’t reappear once they took to playing.

“Winter Winds” brought the crowd bouncing and singing together, the gold spotlights picking up Marcus’ smiles.  Ben smiled as well as he introduced the members of the band, his fingers covered by his pulled down sleeve.  Winston’s banjo playing can’t be matched, if you hadn’t seen it you’d think he was playing lead guitar the way he threw himself into the songs, head back and forth. 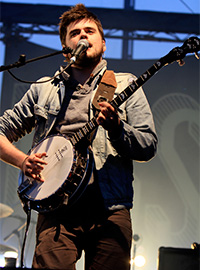 couple in their ‘20s, cheerfully singing, “I really fucked it up this time / Didn’t I my dear”.

Ted with his “I’ve just come in from a rockabilly evening” looks, his string bass like his partner, as they danced and made music together.  A fan shouted “THIS IS FOLKING BRILLIANT!” to the amusement of those around him.  Small children were running around, playing catch with beanie hats, sunset making the lights on stage seem brighter, making the crowd point the words, jumping and grinning, laughing and singing, hugging and being happy together.

The Yorkshire town became Mumsersfield for an evening, and the lads became new honorary boys in Da Hudd. 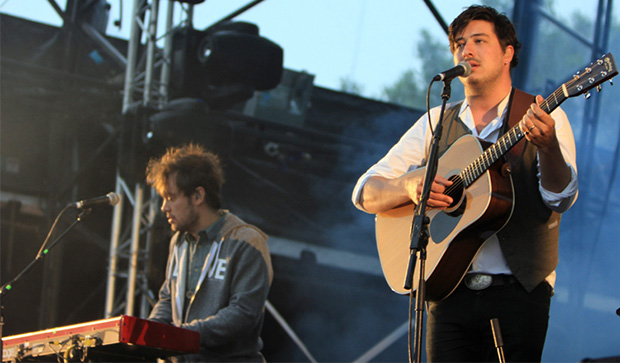 The Cribs : In the Belly of the Brazen Bull