<img src="http://www.qromag.com/wp-content/uploads/2009/09/musetheresistanceSm.jpg" alt="Muse : The Resistance" />Stadium rock at its most dangerous? ... 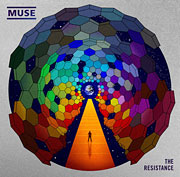 Muse’s fifth album is seemingly tailor-made for massive venues.  Designed to inspire fist-pumping and flag-waving, singer Matt Bellamy’s lyrics challenge his audience to consider political, cultural, economic, and personal alienation to motivate disruption of the status quo.   Utterly bombastic arrangements accompany his pavement-stomping war-cries to make the most ambitious album of the year in terms of establishing a fan-base that could extend beyond the music itself.

Given the album’s title, The Resistance, and that it beings with a song entitled “Uprising”, it seems Muse are heavily intent on overthrowing someone – if not physically, then psychologically.  Plenty of “us vs. them” and “find the truth” rhetoric fills The Resistance, as Bellamy hints unspecifically at corruption and ill-gotten power throughout the album.  “Uprising” features lyrics like “They will not control us/We will be victorious” over a synth-heavy stomp, which sets the album’s tone early.  “Resistance” is built on an elegant, gliding verse that explodes into a inspired rock refrain that would reach the highest sections of any stadium.  On “United States Of Eurasia”, Bellamy asks with sheer poignancy, “must we do as we’re told?” that, if nothing else, forces his audience to challenge authority on even the tiniest level.  Mr. Bellamy seems ready to accept the role of rebel leader, albeit a symbolic one.

Musically, The Resistance is stacked with well-polished, but heavy rhythms and sharp guitar riffs while Bellamy’s highly-recognizable voice rises to extraordinary levels.  “Guiding Light” features stratospherically sparse percussion, while synth effects slowly build Bellamy’s effort to find inspiration. “I Belong To You (+Mon Coeur S’ouvre A Toi)” runs along a nifty McCartney-esque piano riff while including staggering soft/hard, dramatic interludes.   The album finishes on a three-part symphony “Exogenesis” that totals over twelve minutes and features some of the albums most gripping moments.  The slow, symphonic drive on “Part 1 (Overture)” starts it off dramatically while “Part 2 (Cross-Pollination)” mixes in somber orchestration with yet more heart-pounding rock riffs before the post-apocalyptic refrain of “Part 3 (Redemption)” ultimately resolves the entire effort.

It’s Muse’s most crisply-produced album to date.  Each beat and riff have a certain staccato and intent behind them where previous albums felt looser.  It’s as if the band wants to send a message that they’re serious and want no discrimination of their message based on production flaws.  And given a tracklist with only two songs less than four minutes, their messages are as extravagant as they can be.