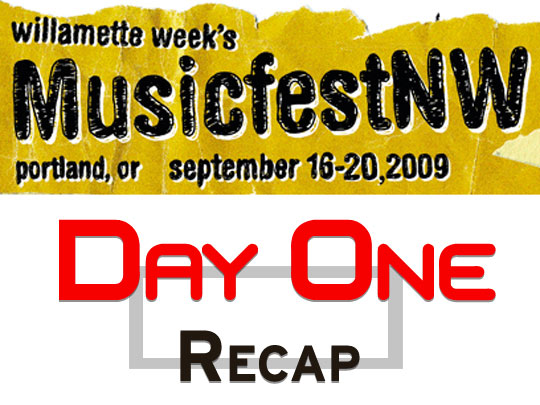 Music Fest NW 2009 kicked off the first of five days of music in downtown Portland with a special opening night party at Berbati’s Pan, thrown by Spin Magazine.  The focus was on alt-folk, but Portland still stayed weird: 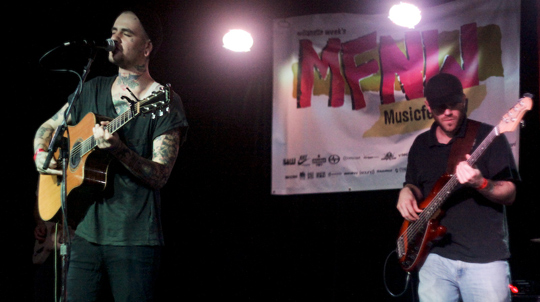 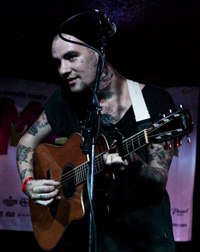 MusicFest NW kicked off their festivities in Portland, Oregon at Berbati’s.  A light drizzle greeted those in attendance, which seemed fitting as opening act Fences (QRO album review) provided a rather ho-hum performance.  The crowd was polite and patient, as if they were waiting for lead singer Christopher Mansfield to deliver.  Mansfield has a decent sounding voice, but lyrically the songs could use some improvement.  Who doesn’t like a good melancholy tune?  However, when the lyrics make one wince, some adjustments couldn’t hurt.  If junior high style love songs are what you’re looking for, Fences might just be up your alley. 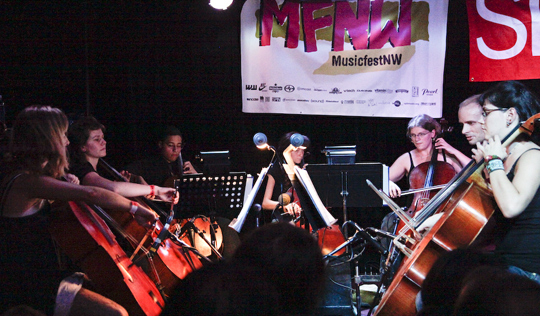 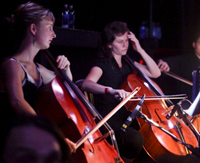 Portland Cello Project aims to live up to Portland’s official motto:  Keep Portland Weird.  The band’s self-described purpose is, “to expand people’s perception of the cello by playing it en masse in venues where you wouldn’t normally hear cello music, and by playing a unique assortment of music you wouldn’t normally associate with the cello”.  Mission accomplished!  Portland Cello Project gave the crowd what it came to see.  With seven cellos and a drum, PCP is arguably one of the most unique acts of MusicFest NW. 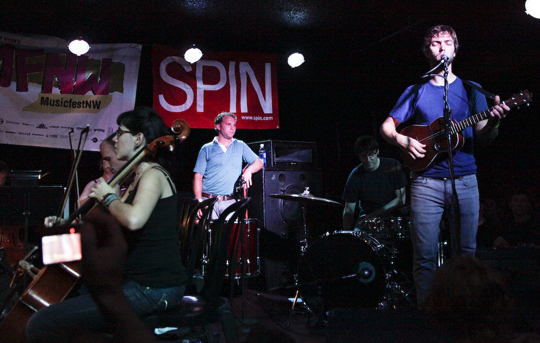 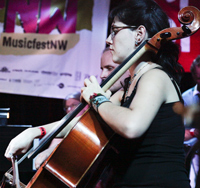 Crowd favorites included their rendition of Outkast’s “Hey Ya!”, as well as their version of a Pantera track, which, according to the band, they learned while collaborating with none other than Buckethead (QRO photos).  MusicFest NW was a fitting place to debut their latest instrumental piece, an unreleased track from Portland’s eternal pride and joy, Elliott Smith (QRO album review), entitled “Taking a Fall”.  Justin Power provided vocals onstage for a few songs as well which was a nice addition, as a purely instrumental show may have been a bit much for some in the crowd.  The group decided to delight it’s audience one final time and capped off their set with none other than Britney Spears’ “Toxic”.  Portland Cello Project is certainly succeeding in their quest to expose Portland hipsters to the cello, one PBR at a time. 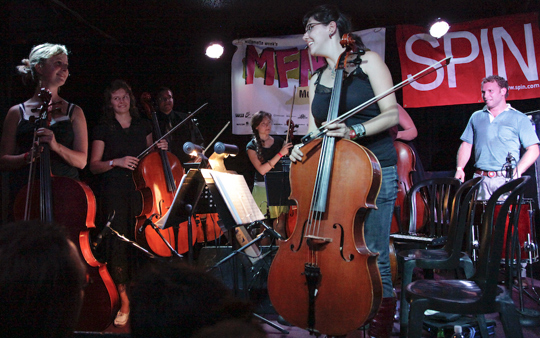 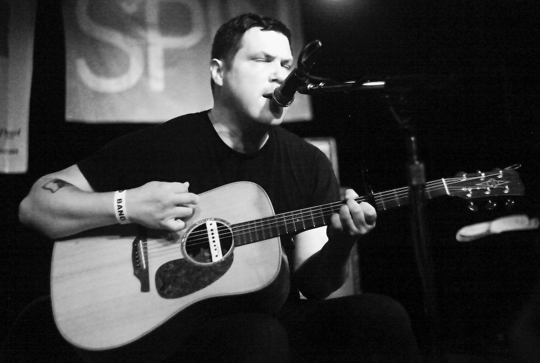 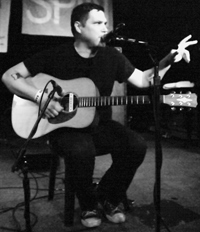 For more than 10 years now, Damien Jurado’s been churning out his take on the hardships in life.  He provided a set filled with ballads focused heavily on love, loss, death, and destruction.  He made it look easy, even with a few technical difficulties along the way.  There was a slight ‘love me or leave me’ attitude in his delivery, yet somehow he still managed to come across as humble as can be.  At times, he appeared so shy, it almost hurt to watch as he scarcely opened his eyes during the entire set.  His main interaction with the crowd came when he joked about storming the stage during headliner Will Sheff’s set (see below), where he claimed that he might grab the mic and shout, “I have some pretty damn good songs too, Will!”  I concur, Damien, I concur. 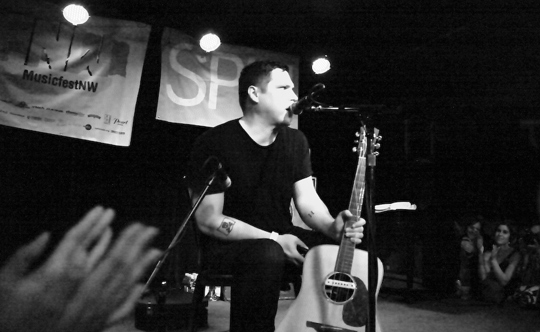 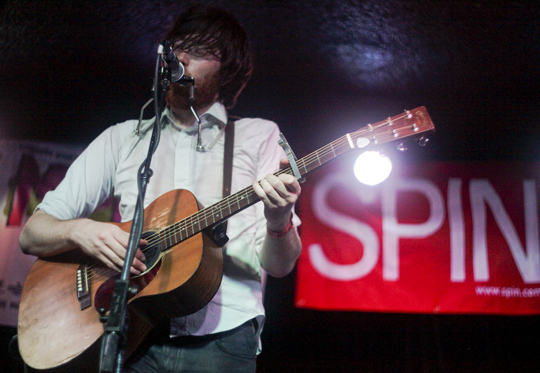 Will Sheff began his set with a disclaimer that he had just arrived after a 23 hour flight from Tel Aviv.  Even in his sleep deprived state, he gave more than most on a good day.  He captivated the crowd right from the start.  As front man for bands Okervill River (QRO album review) and side project Shearwater (QRO album review), he has a nice catalog under his belt, including his solo material which he has yet to release.  (Note to Sheff:  Once you get some sleep, why don’t you hit the studio?) 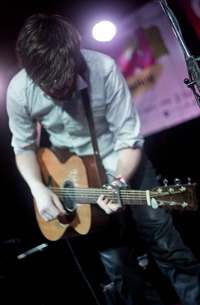 There were some technical difficulties, but Will soldiered on.  This was indie folk-rock done the right way.  Sheff broke out the harmonica for a few songs, and even sat down at the piano for a quick tune, which nearly prompted a cat fight, as a Chatty Cathy in the crowd found it difficult to simmer down.  Sheff finished up his set with a duet along with Portland Cello Project (see above).  As if that wasn’t enough, he even came back for an encore.  If what he gave was considered a sleep deprived performance, one can only imagine what he’s capable of with a full night’s rest. 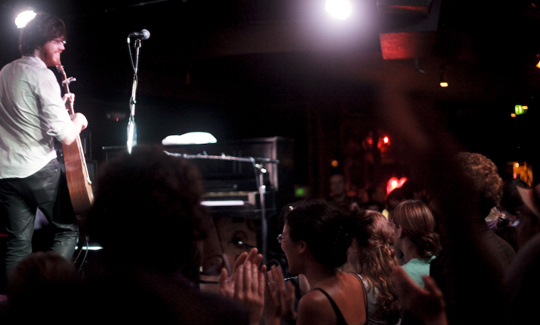 -all photos by Autumn Andel