The decade-old Music Fest Northwest, promising every year to be bigger and better, grew a day since 2009 (QRO recap), to become a five-day citywide extravaganza for 2010.  While there are more days to take a shower with your festival wristband, the 2010 lineup lacks the cornucopia of choice-y acts, and the international flavor of its previous year.  Everyone wants to see The National (QRO spotlight on).  The last minute addition of The Smashing Pumpkins (QRO live review at a festival), added the much need spice to its mediocre stew.  Other than few sure bets like Ra Ra Riot (QRO spotlight on), Okkervil River (QRO live review), Akron/Family (see below), etc., this year’s MFNW is big on Northwest.  Which isn’t necessarily a bad thing, since this region has produced some of the finest acts in recent music history.  But for Portland resident, it’d be nice to catch bands that one doesn’t have the luxury to see every few months. 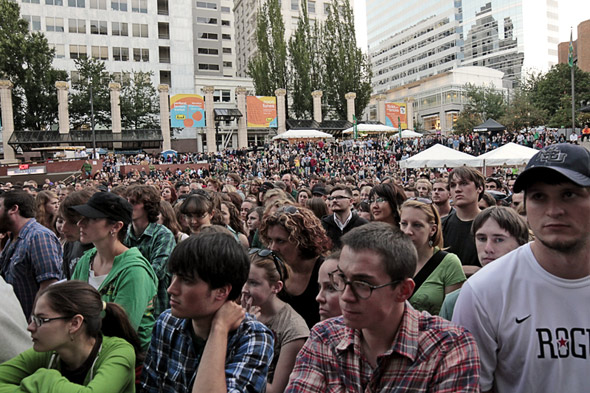 Just in time for the weekend outdoor concerts, the sky cleared up.  Though I only slept for about three hours, still found myself rushing to the event.  At least the parking situation has improved from previous night.  This will be my first time attending a concert at the Pioneer Courthouse Square – the tourist center of downtown Portland.  It seems all travelers converge here for a little rest, and people watching.  Guess, having the visitor center, 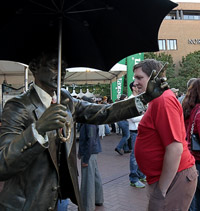 Starbucks and the Max (public rail transportation) stop, helps to fuel the gathering.

Pioneer Courthouse Square gets the most security-staffed award of the Music Fest NW.  No matter where you looked, you could spot a black uniform.  They checked your bags at the entrance, and confiscated any bottled liquid.  This was the only participating venue where you couldn’t get free water, and had to deal with the portable toilets. 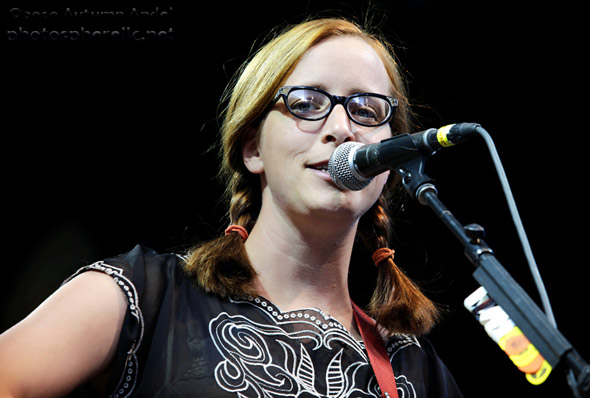 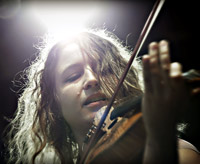 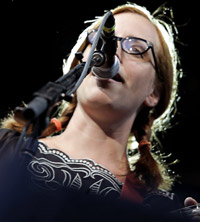 6pm, and the square was less than half full.  Singer/songwriter Laura Veirs, who has been given much boost by Colin Meloy of The Decemberists, warmed up the crowd with her folk-pop tunes.  With seven studio albums, and over decade of refining her craft, Veirs has been gradually garnering critical attention.  The Portland transplant wasn’t just singing along her poetic compositions with her acoustic guitar.  Veirs’ band comprised of violin, keyboard, bass, and drums, which made her songs full and rich, making it a perfect accompaniment, for the gentle, late summer evening. 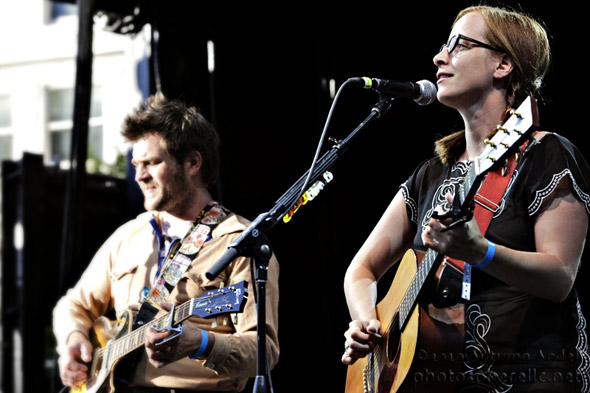 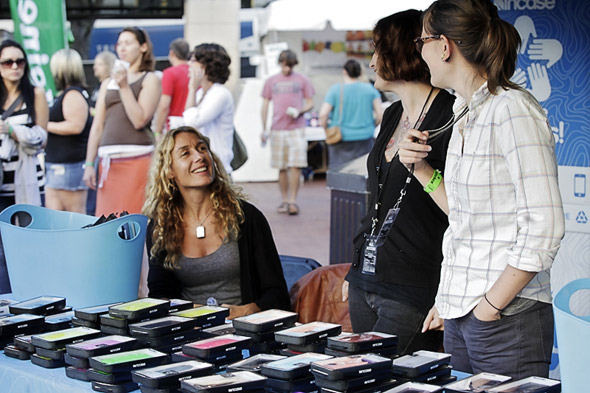 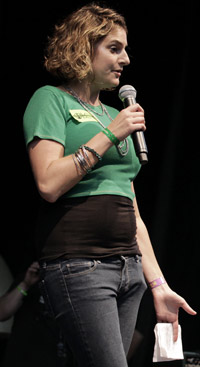 In anticipation for the headliner, The Decemberists, the square begin to fill up with their fans.  I could still navigate through the various crevices, catching the sights of the sponsors.  Incase was giving out their free iPhone cases.  Along with a table of kaleidoscope of choices, there were cardboard boxes placed throughout the square, and people could take as many as they wanted!  Most of the cases were for iPhone 3 series, but I managed to score one of the few iPhone 4 cases.  It was about bloody time, someone was generous enough to shower freebies to a region, with one of the nation’s highest unemployment rate (10.4% in Portland as of August 24th, 2010).  But Heineken sought opportunity to take advantage of the jobless and depressed.

Before the Decemberists took stage, Meloy introduced Oregon League of Conservation Voters (OLVC), an organization dedicated to protect the environment.  They had an info booth set up in the square, and The Decemberists donated gift packs to give some star power.  It’s Oregon – you are going to encounter environmentalists no matter where you go.  Hmm… well, can’t verify if we have an eco-friendly strip clubs. [note: in case you didn’t know – Portland has the most strip clubs per capita than any other metro city in US] 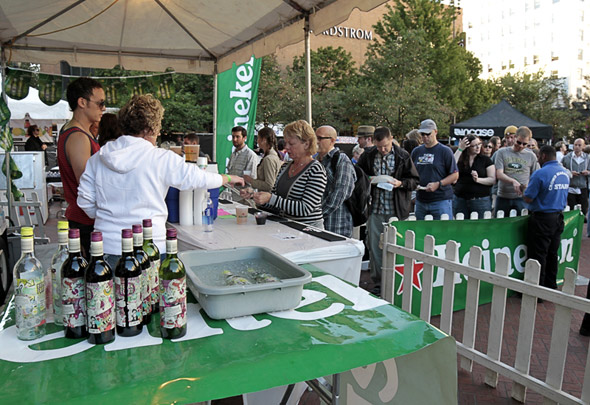 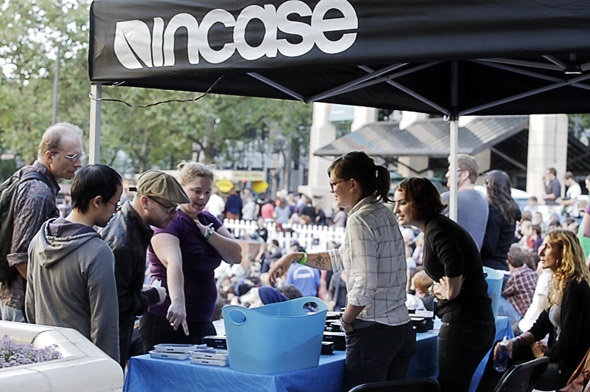 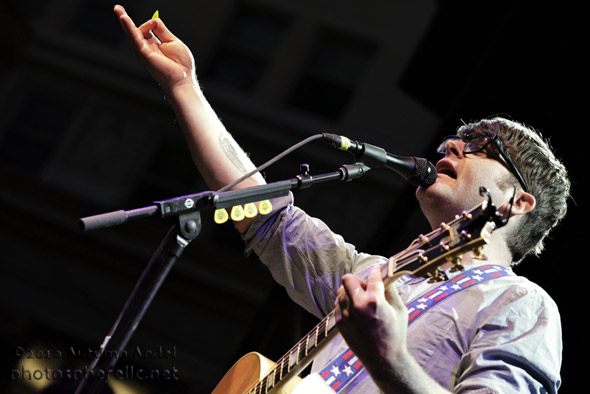 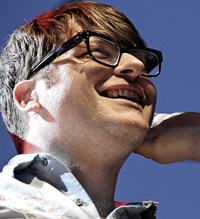 Under a star-twinkling sky, on a mild night, everyone was in good spirits, as their hometown darlings, The Decemberists, treated them with a mix of the hits, the old, and the new.  The band introduced two potential tracks for their sixth studio album, due out next February, “Rise to Me” and “Down By the Water”.  The quintet’s idiosyncratic folk rock set ranged from the poppy “O Valencia!” to the bluesy “Won’t Want for Love (Margaret in the Taiga)”.  It was pretty clear that Meloy was the center of the attention.  Not only was the brightest of the lights focused on the lead singer, but also he jumped, bounced, and swayed in all forms.  Supposedly, mayor Sam Adams was witnessing Meloy, who asked the crowd to do a better job at sing-along for their elected official’s sake.  Laura Veirs joined the stage for a few numbers. 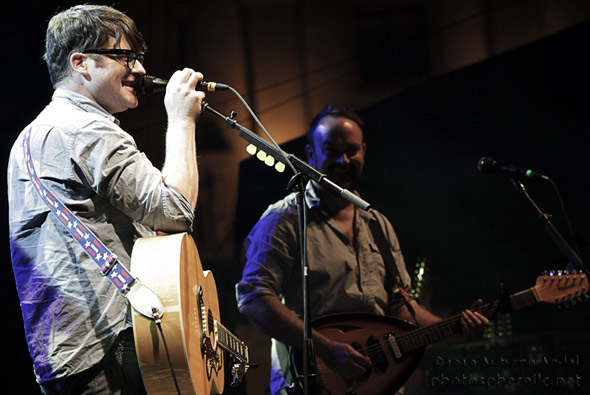 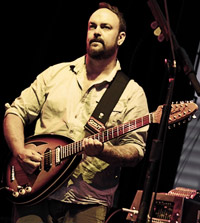 Meloy and his bandmates, Chris Funk (guitar and too many instruments to list), Jenny Conlee (Hammond organ and all instruments with keys), John Moen (drums), and Nate Query (bass) 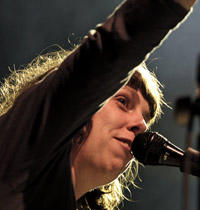 frequently exchanged smiles.  What could be better than playing in an outdoor venue, with great sound system and lighting, in your hometown, in a perfect weather?  And for us photographers – finally, a proper photo pit, and enough light to keep us from pissing off the crowd during the concert, and keep us from going insane in the editing process. 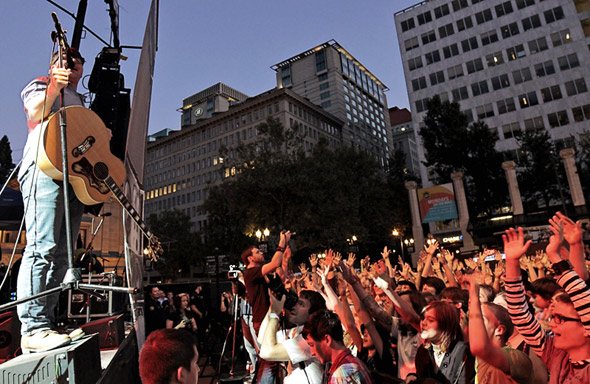 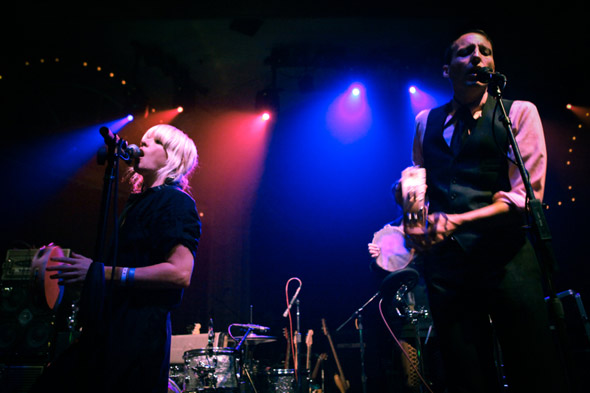 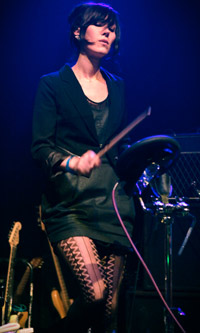 For the last concert at the Crystal Ballroom for Music Fest NW, a local Portland band called Tu Fawning opened for the popular indie bands 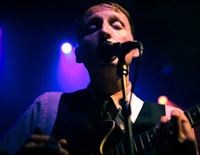 Akron/Family and Menomena (see below).  Which seemed appropriate seeing as Tu Fawning’s Joe Haege is also Menomena’s Joe Haege.  This in mind, the band’s music was still exceptional enough to be able to open for a band like Menomena, even if they didn’t share a band member.

Tu Fawning’s show was believe it or not, one to the better performances at MFNW.  Aside from some sound issues including a lot of annoying 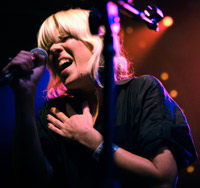 feedback in the last few songs of their set, the songs were very well composed and sounded spectacular through the venue’s sound system.  Long trumpets, good music with driving beats, and stylish outfits (which seemed to match the tone of the music perfectly), helped the show stand out from a lot of other acts at MFNW.  Based off of Saturday night’s performance, it is likely that we’ll be hearing about Tu Fawning more in the next couple of years as they become more and more prevalent on the indie music scene’s radar. 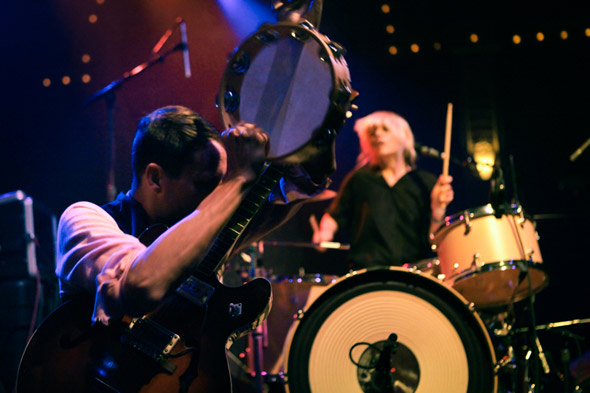 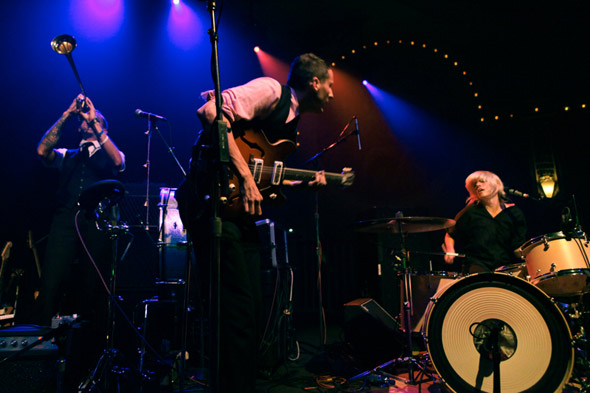 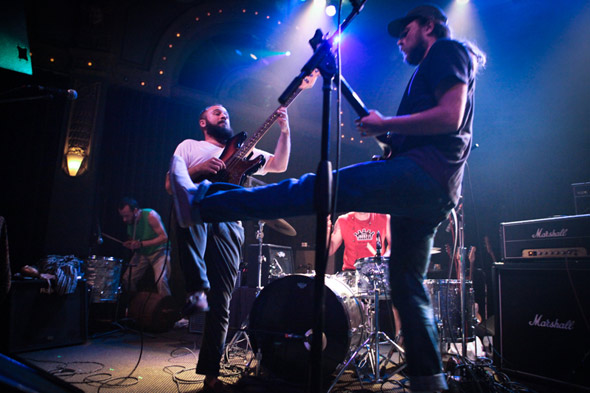 Click here for photos of Akron/Famiyl at Castle Clinton in New York, NY on July 24th, 2008 in the QRO Photo Gallery 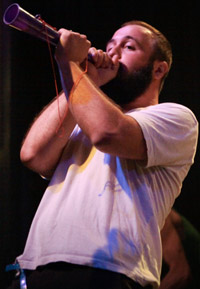 MFNW.  Just like any other set, the band played a few songs and the audience’s reaction was great and everybody was having a great time; then they kicked it up a notch.  A song turned into a jam, then a longer jam, then an even longer jam.  Normally when band’s jam onstage it can get old after maybe ten minutes, but Akron/Family did a solid thirty minutes of straight jamming and the amazing thing about it was that it never got old.  Dancing, yelling, rubbing audience member’s heads, and a monumental percussive jam; Akron/Family certainly did a proper job of warming up the crowd for the indie giants Menomena.  If Akron/Family happens to pass through your town, dropping twenty or so dollars to see their show will be unquestionably the most worthwhile twenty bucks you’ve spent on a show in a long time. 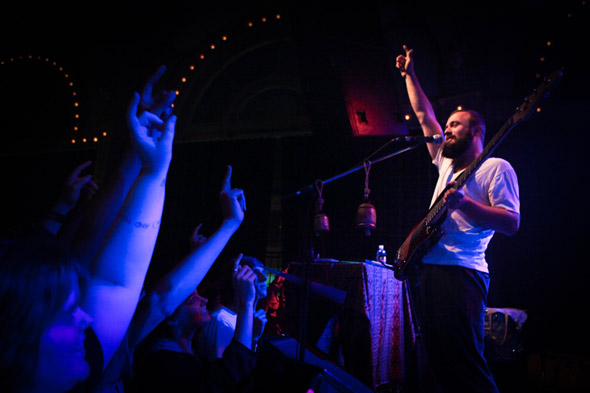 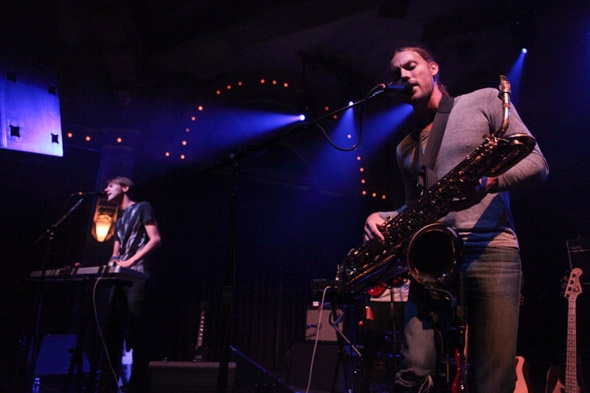 Click here for photos of Menomena at Webster Hall in New York, NY on November 11th, 2007 in the QRO Photo Gallery

Click here for QRO’s review of Menomena at Great Scott in Boston, MA in March ’07

Finally, the headliner of all of the shows at the Crystal Ballroom for Music Fest NW: the great 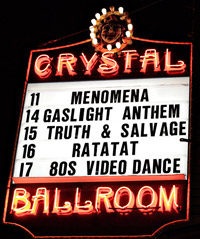 Menomena.  With an extremely warm welcome, Menomena made their way onto the stage and went right into playing their song “Tithe” from their new album Mines.  Playing their many different instruments at the same time to give the same effect the songs have on their albums was an impressive display of talent by the band.  Danny Seim on drums and vocals was particularly superb as he pulled off all of his lead vocal parts and driving drum beats simultaneously and flawlessly.  To wrap up the set, Menomena played their hit “INTIL” off of Mines. 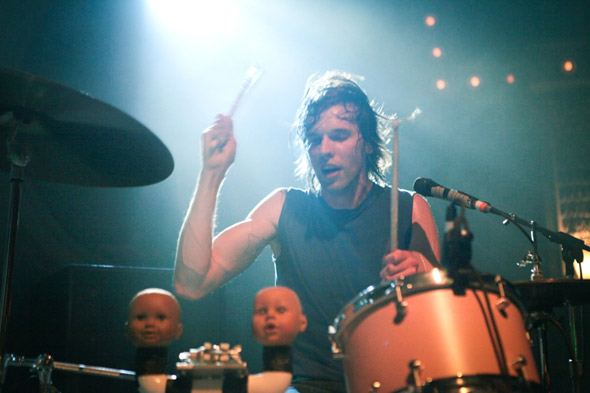 Menomena’s performance live was honestly a pretty stock concert.  With minor quirks like the two baby heads Danny Seim drums on for the song “Dirty Cartoons”, Menomena’s set still doesn’t stand out as smack you in the face entertainment.  However, what it lacks in zest and zeal, it makes up for in brilliant music and raw talent.  So in short, Menomena live is good for most, but outstanding for those who can really appreciate quality music. 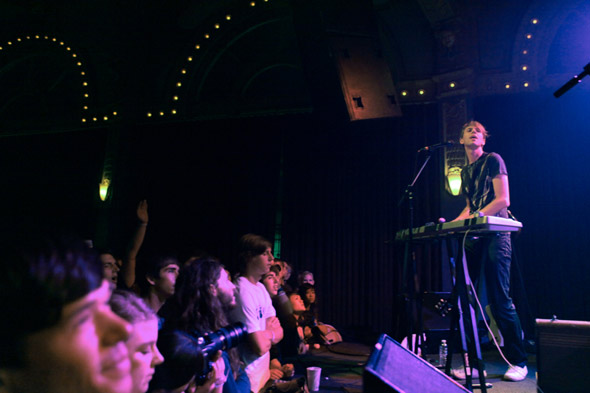