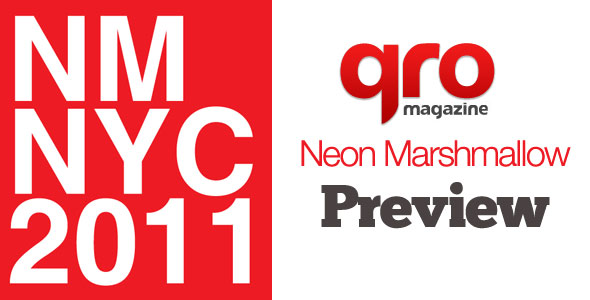 Neon Marshmallow arrives in New York City at Public Assembly (QRO venue review) this October 14th – 16th for three days of auditory & visual hallucination, co-sponsored by QRO Magazine.  After two successful stints in Chicago, the brains behind Neon Marshmallow look to build on their bracing mix of avant-garde legends (see Rhys Chatham) and experimental pop (see La Big Vic).  The NYC edition appears to hew more towards the electronica end of the spectrum compared to the bloodied eardrum bills of the Chicago edition, but a state of the art full-spectrum Bunker sound system will ensure that every roaring decibel has its way with you.

A limited number of three day passes are available, which include access to all the shows, some freebie booze on Friday & Saturday nights, and banging after-parties.  Jump on them while they last, to catch Loren Connors, Grouper & more.  In the meantime, stay tuned for our expanding preview as QRO picks out the sounds & sights that are sure to be highlights of the fest.  See you there!