Nice, A Fest Day One Recap

The first night of Nice, A Fest kicked off on Thursday in Somerville, MA at Crystal Ballroom.... 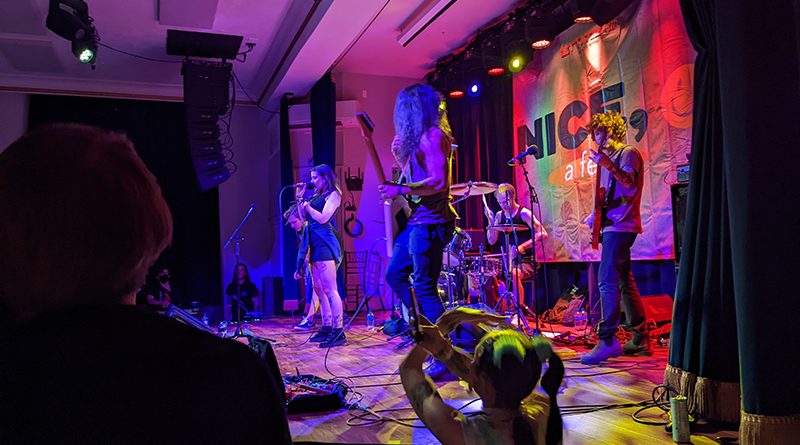 The first night of Nice, A Fest kicked off on Thursday, 28th July in Somerville, MA at Crystal Ballroom. Headliners Cerce closed out the evening, with openers Leopard Print Taser, Space Camp, and The Infinity Ring.

The music festival has grown in a year from a one-day event at Boynton Yards to a three-day event at two venues, featuring over 40 acts. Plus, an afterparty on Sunday and midnight screenings of the Wayne’s World duology. That’s a lot of buzz for Davis Square in the dog days of summer.

You could hardly ask for a better festival launchpad than the magisterial Crystal Ballroom. The location above Somerville Theater recently found new life as an event space, or as the Ballroom gang puts it themselves: “A bold new phoenix was able to sow opportunity from the devastation, rise from the ashes.” Indeed, a venue of mythological proportion is what’s needed for a music gala of epic ambition like Nice, A Fest. With beautiful high ceilings adorned with chandeliers, a proper hardwood recessed pit, and two bars front and back, Crystal Ballroom turned into the perfect punk playground for a Thursday night bill that leaned heavy into the hard stuff.

Fest opener The Infinity Ring greeted the assembled crowd with post-rock gravity. The five-piece included three guitars, keyboard, and a man at the drums. No bass. The drummer did some heavy lifting, parsing the astral buzz of synth and string into digestible chunks. The tattooed frontman, bald and bathed in red light, looked like he washed down razor blades with Americano chasers. The dark & doomy mien of the rest of the band did nothing to dispute the impression.

Surprise revelation of the night Space Camp took the stage after some soundcheck salsa. The timetable of Nice, A Fest is wildly optimistic. Bands (barring headliners) are slotted for 30-minute sets with 15-minute pauses to break down and set up. This will turn into a thing during the eleven-hour bills on Saturday. But it’s not for Space Camp to worry about. The electro-punk two-piece brought hardcore energy to their set. A manic dynamic played out between the keyboard and drums, a real call & response vibe born out of two musicians that know each other well. Shades of Matt & Kim. Shades of Gay Against You in terms of aggro joy. After the unfortunate loss of doomcore SEED from the bill, Space Camp came to the rescue.

Somerville’s own Leopard Print Taser kept the punk rock fires flaming. The four-piece played loud, mostly fast, with built-in breaks for the guitar, bass, and drums to strut their stuff. The band sports a showstopping fronter with a multi-tool skill set of vox, guitar, bubble blower, and pizzazz. The crowd ate it up.

Headliner Cerce wins the award for having their name on the most band t-shirts in Crystal Ballroom. Their fans showed up. Cerce’s sound is heavy, bright, loud, and fun. They’ve got party punk vibes, throwing in everything plus the kitchen sink to start shit. Shades of Everyone Gets Laid. It was the perfect soundtrack for sampling the Picklet, a gimlet concocted with a festival sponsor’s pickle juice. The bar staff will give you a strange and worried look if you order it. And if you’re lucky, they’ll be too embarrassed to charge you.

Nice, A Fest continued Friday at two venues, The Rockwell and an encore at Crystal Ballroom. If the soundcheck salsa stalled the schedule, you could ice yourself over with a chill Picklet and just enjoy the vibes.