The second night of Nice, A Fest premiered the double-barreled action of two venues, Crystal Ballroom and The Rockwell, hosting the same music festival with different lineups.... 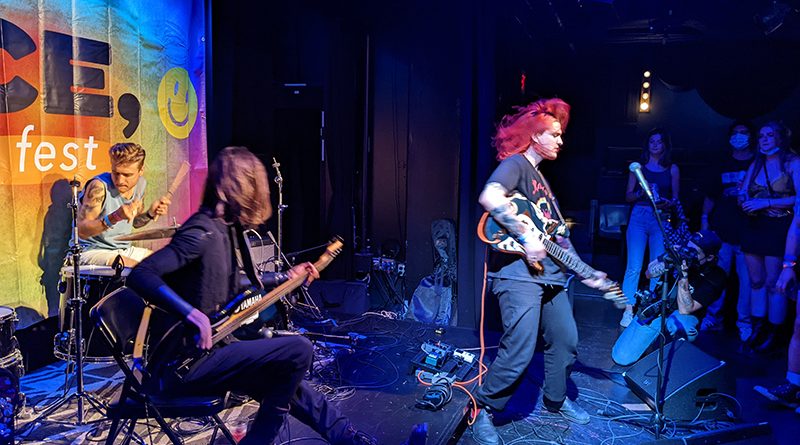 The second night of Nice, A Fest on Friday, July 29th premiered the double-barreled action of two venues, Crystal Ballroom and The Rockwell, hosting the same music festival with different lineups. Fans percolated back and forth between stages throughout the night, and, if you survived until midnight, caught an after-hours screening of Wayne’s World at Somerville Theater.

The Rockwell offered a cool respite from the July heat. The black box theater, located thirteen stories beneath the Earth’s upper crust, has a long and storied history in Davis Square. Its latest incarnation finds new life post-pandemic with a calendar full of music, theater, comedy, and more. In its music mode, fans occupy the central pit for an up-close live experience. If your energy is starting to flag, you can take a breather in seats along the wall or duck out to the hall for beer, wine, and spirits. No word on whether the bar offers Picklets.

Pisha brought the energy to kick off Friday’s slate of music at The Rockwell. The Oklahoman artist has local roots and performs as a trio with guitar, bass, vox and backing tracks. There’s a pop-grind punch to Pisha’s sound. The breathy electro steez flirts with Madonna-core, circa Ray of Light. Shout out to the bassist and guitarist, who conspired some pink spray paint shenanigans all over their body.

Surprise of the night was Olivia Sisay. If you listened to her single, “Good For Tonight”, you knew she could deliver the synth-dripped R&B. But you might not expect her to open the set with an acoustic strapped to the torso for some still-my-beating-heart ballads. Sisay promised “to make you cry” before dropping the more danceable tracks. She wasn’t kidding – there were a few tears in the crowd. Olivia Sisay cuts to the emotional quick in all the right ways.

Maneka just flew in from Connecticut, and boy, were his wings tired. The three-piece is led by guitarist Devin McKnight plays heavy-riffing art-rock with a fondness for throwback musical accents. If you listened to any of the band’s forthcoming Dark Matters, a polyglot of sonic style, you might expect a wider-ranging sampling of sounds in the live show. But Maneka kept the focus tight and dug deeper into the eminently shreddable Roadhaus vibe. Extra points for McKnight’s WrestleMania t-shirt.

Not to fixate on t-shirts, but Nice, A Fest-veterans Pet Fox rocked the plain white Ts upfront. Were they short of laundry on the road, opting for fresh duds at the nearest offramp Target? Regardless, the three-piece of guitar, bass, and drums sounds like road warriors, serving up polished cuts from their new album A Face In Your Life. To call the band post-punk is accurate, but a little misleading. Pet Fox is throwback post-punk, when all the term meant was whatever the hell comes after punk and hadn’t calcified into a specific style. Hearing the band live you can appreciate the different musical eureka moments of jazz, prog, no wave, and more, that worm their way into the compositions.

Shout to the Pet Fox frontman for kinda looking like pro cyclist Primoz Roglic. Primoz, my man, you struggled in the Tour de France, but you’ll be back better than ever in La Vuelta! All hail Slovenia!

Kitner plays a jangly guitar-driven rock n roll sound that harks back to the non-grunge college rock of the late ‘80s and early ‘90s. Think: The Replacements, Sugar, Soul Asylum – that ballpark. The four-piece, consisting of two guitars, one bass, and drums, played tracks off their latest LP Shake The Spins and more. The mix was tight and the guitars sounded clean and full and bright, not syruped in the generic soup of catchall distortion.

The prize for first true mosh pit of the night goes to Skylar Symone. This crew rolls deep, and Symone has a following that’s down to party. The fronter was dressed for risky business, with an open-chested magical mystery tour vest and nothing underneath except some strategically-placed flesh-colored nipple tape. Free the nipple, but not tonight. Extra points to the lead guitarist who hurt themselves skateboarding (the skate park is apparently where all band members are recruited) and toughed it out, Picasso blue period-style.

Another road warrior band Evolfo came into The Rockwell ready to roar. The six-piece includes two guitars, one bass, keys, horn, and drums, and every bit of that sonic spectrum lights up in their dense psych funk. God bless the horn – it cut a clean and beautiful line through the walls of strings. If you listened to their most recent album, the superlative Site Out of Mind, you expect the latter day yippie phreak sound, but hearing a little funk fed through the phreak phonic philter felt fabulous. Ow!

If you’re not getting pizza & beer from Mike’s Food and Spirits between sets, what’s wrong with you? Look at this slice! The longtime neighborhood fixture looks great these days and it’s located right between the two Nice, A Fest venues. Wall to wall sports TV, airing games you actually want to watch. Back in the day the loveable and occasionally ornery owner would tune the channel to harness racing all day long. Not sure he gambled – just liked to see the horsies go. But I think the younger generation has taken over and made a few editorial decisions. Good choice!

Squitch! Squitch! Squitch! It’s the name you can’t stop chanting. The crowd showed up for Boston-based band and it felt like the perfect show for The Rockwell, letting the fans slide right up to the monitors for an intimate experience. Squitch’s live show has a bit warmer sound than you might expect from the angular and elevating Learn To Be Alone.

We warned you that Colleen Green sold out shows around town. Sure enough, Crystal Ballroom hit capacity as her set started, and fans queued up at the door trying to get in. Green has a long list of stoner punk standards, but you were likely to hear more than a few tracks off her latest LP Cool. Shout out to birfday boy Jeff!

Dirt Buyer closed out the night at the Rockwell. Some artists treat the final spot on the bill as a solemn mantle, a grave responsibility, a noble assignment to be endured like Jimi Hendrix staying up ‘til dawn so he could close Woodstock. Dirt Buyer was more like, whatever, and it worked all the same. The three-piece sounds heavier in person than on the marvelous, moony self-titled LP Dirt Buyer. The frontman does the heavy lifting in terms of crowd banter and seems happy to shine in the spotlight. Extra points for the guitar body sculpture art sending out the heart-shaped box vibes.

Hard to believe Nice, A Fest would ramp up further on Day Three with both venues buzzing and a bill lasting all day and night. It’s a fun challenge to skate between venues, trying to catch your perfect lineup. From The Color and Sound, to Talk Chalk, to Bowling Shoes, to House of Harm, to Born Without Bones and back again. But one shouldn’t get caught out on the sidewalk when the venue hits capacity or you might miss a headliner like Future Teens and have nothing to show for the rest of the night except pizza and beer at Mike’s. Oh, and Wayne’s World.