Nick Cave & The Bad Seeds – Push the Sky Away

Nick Cave & The Bad Seeds have revived their somber, tragic past on Push the Sky Away.... 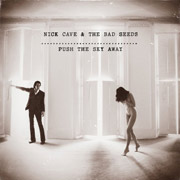 While it’s always been a time of changes for the ever-changing Nick Cave & The Bad Seeds, recent years have seen more than their fair shares of adjustments.  Cave & some Seeds formed Grinderman in 2006 to get garage-y outside of the Bad Seeds umbrella – though 2008’s Bad Seeds release Dig, Lazarus, Dig!!! was pretty garage-y on its own.  The following year, Mick Harvey – the only charter Bad Seed remaining apart from Cave – left the band.  A second Grinderman record followed (QRO review), but what of The Bad Seeds?  Well, they left their charter label Mute for their own imprint – and have revived their somber, tragic past on Push the Sky Away.

Sky opens with “We No Who U R”, a dark & slow, solo & choral piece that serves as a great opener for what is to come.  Sky often strips down to Cave’s voice – or augments it with back-up singers and/or orchestral maneuvers.  “Wide Lovely Eyes” is somehow more choral and more intimate.  Cave tells not one, but two stories of lost, fallen ladies of the night in the ominous “Water’s Edge” and more resigned “Jubilee Street”.

Click here for photos of Nick Cave & The Bad Seeds at 2013 Optimus Primavera Sound in Oporto, Portugal in the QRO Concert Photo Gallery

Click here for photos of Nick Cave & The Bad Seeds at Orpheum Theatre in Boston, MA on March 24th, 2013 in the QRO Concert Photo Gallery

Nick Cave is also able to pull of some moves that no one else would be able to, or at least no on else would be able to keep an absolute straight face.  “Mermaids” opens, “I was the catch / That could fire up her snatch”, while only a few tracks after “Jubilee Street” comes “Finishing Jubilee Street”, about what happened after he wrote that song.  Admittedly, both songs peak at their start and then meander after that, as if Cave didn’t know where to go from there.  Better in the unusual department is “Higgs Boson Blues” because it actually is slow blues – about the ‘god particle’.

Push the Sky Away closes with its title track, a grandly somber coda to this grandly somber record that’s more in line with 1996’s Murder Ballads than Lazarus or Grinderman.  Nick Cave & The Bad Seeds have long proved they can do many, many things – and now manage to both change and stay true.

Alex Maas of The Black Angels