<img src="http://www.qromag.com/wp-content/uploads/2009/06/northsideday3sm.jpg" alt=" " />Day Three of Northside was the evenest so far, with one great old band, and some mixed results among the new.<br />...

Worked even harder on Day Three of Northside Festival, with an old band thrown in among the new.  Not all the bands met expectations, and especially some of the venues were let-downs, but there was a lot of good stuff involved. 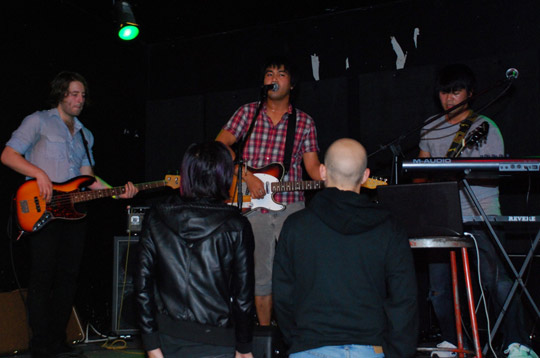 One of the main purposes of Northside is to catch hyped new Brooklyn bands, and pow wow! is certainly that – it was even L Magazine's top 'NYC Band You Need To Hear'.  After missing them yesterday (QRO Northside Day Two recap), managed to make it out to Bar Matchless for them to start off Day Three.

Not that it was an impressive start.  Considering how hyped these guys are, have to say they seemed unimpressive.  Their garage-rock is like Black Lips (QRO album review) without that band's much bally-hooed stage antics.  Bar Matchless ain't the perfect place to see a band, back behind the actual bar in what looks like an actual garage (only half-covered, a problem, as it was lightly raining), but despite what L Magazine said, pow wow! don't justify the funky capitalization & punctuation. 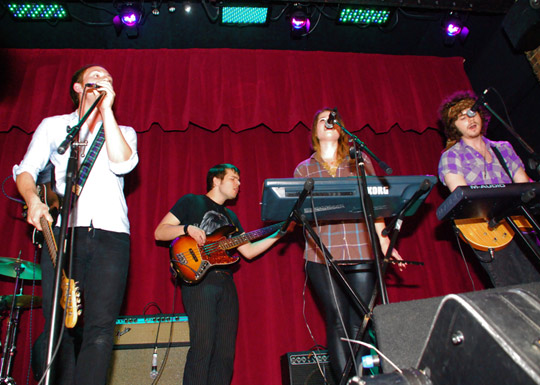 Thankfully, L Magazine was more on the ball with Savoir Adore.  After seeing so many shitgaze/garage-rock Brooklyn bands, it was really nice to see some hometown Americana (a-la Jones Street Station – QRO interview).  It was also nice to have the return of bands with female singers.  Maybe a little too new-country, not alt- enough, but pretty good. 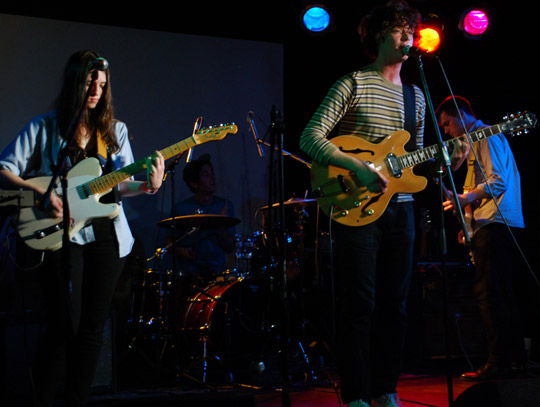 Like yesterday, headed out early for Studio B (QRO venue review), to ensure entrance to the other band of Northside I really wanted to see, Bishop Allen (see below).  That meant catching the tail end of the free Heineken on Studio B's rooftop (despite billing of 5:00-8:00 PM, they were out by 7:00 PM), and all of The Darlings.  There weren't that many people for the late-announced opener, at least at the start, especially when compared to even the crowd for Witchies, Sunset Rubdown's opener last night.  Poppy & upbeat, the band was nice enough, though the singer's voice was a bit nasal.  And the girl (yes, another female singer/keyboardist, though she also played guitar at points) looked a bit like a young Evan Dando (of The Lemonheads – QRO live review)… 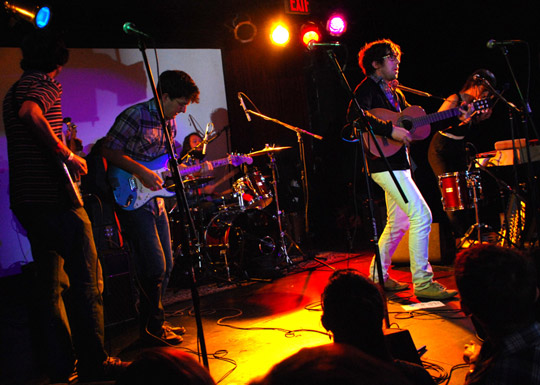 While Northside is primarily for seeing bands you don't know (as much, if not more so, from necessity as intent), it was really nice to return to one I did, Bishop Allen (QRO spotlight on).  The Brooklyn-by-way-of-Cambrige band plays some catchy, upbeat alt-pop that's very easy to like.  And even if this year's Grrr… (QRO review) ain't as good as last year's The Broken String (QRO review), they're still a welcome sight.

Bishop Allen playing "Same Fire" live at Studio B in Brooklyn, NY as part of the Northside Festival on 6/13/09:

And it seemed like Bishop Allen knew which album the fans like more.  While they started off with some Grrr… tracks like "The Ancient Commonsense of Things" & "Cue the Elephants", the show – and the crowd – kicked up a lot more when they went back to The Broken String with pieces like "Rain" & "Click, Click, Click, Click" (any photographer's favorite…), not to mention even earlier piece "Same Fire".

Bishop Allen playing "The Monitor" live at Studio B in Brooklyn, NY as part of the Northside Festival on 6/13/09:

In the middle of the set, Bishop Allen switched things up a bit by playing singer/keyboardist (…) Darbie Notwaka's two lead vocals pieces, The Broken String's "Butterfly Nets" and Grrr…'s "The Magpie", with the bassist holding up a xylophone to his mike on one hand, and playing it with the other, on "Butterfly".  Doing them back-to-back certainly made sense for arranging their gear, but it was a bit of overkill, and it might have been nicer had they been more spread out.

Bishop Allen playing "Rain" live at Studio B in Brooklyn, NY as part of the Northside Festival on 6/13/09:

Bishop Allen returned from their encore break with perhaps the two songs that most excited the crowd, "Middle Management" (made semi-famous by the band appearing in Nick & Nora's Infinite Playlist), and "Flight 180".  While the former lit off right from the start of the song, the latter (which was actually played first) was more of a slow build, giving the band time to plug in their instruments & strap 'em on.

One of the nice bonuses of Northside is that Brooklyn bands get to play close to home – really close to home for Bishop Allen's Justin Rice (QRO interview), who stated he lived right around the corner.  In fact, The Broken String's "The Monitor" was about an old ironworks literally down the street, one of the many abandoned buildings around Studio B, right near the East River.  And I think I watched the entire show sitting (well, kneeling – was on the couch that faced away from the stage, had to turn around on it to watch the show) next to his parents… 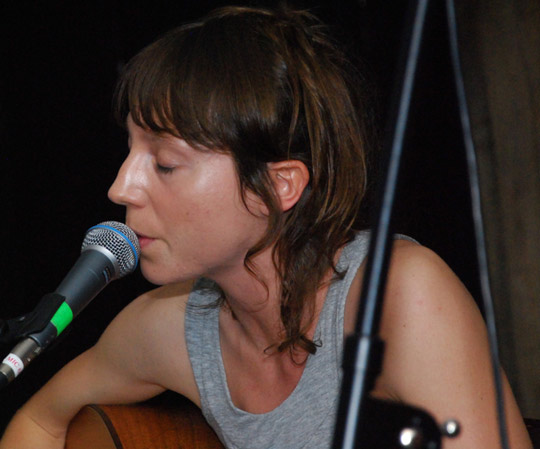 After Bishop Allen & walking back down to 'downtown Williamsburg', could have gone to Asobi Seksu (QRO album review)/Cymbals Eat Guitars (QRO photos)/Elika at Music Hall in Williamsburg (QRO venue review) early, and ensured entrance.  But after getting in to Studio B with such ease twice, figured I could go home, come back, catch a bit of alt-folk singer/songwriter Jaymay (QRO album review) at Cameo, then hit up nearby Music Hall for some of Cymbals and all of Asobi.  However, after watching the crowd talk over Jaymay, tried & failed to get into Music Hall.  Apparently, they weren't doing the 'one badge out, one badge in' thing – I literally saw someone with a badge leave, and asked the security, who said that if they did that, people would get stamped, go back out (like they were going for a smoke), and pass their badge off to someone else.  Smoking laws strike again! 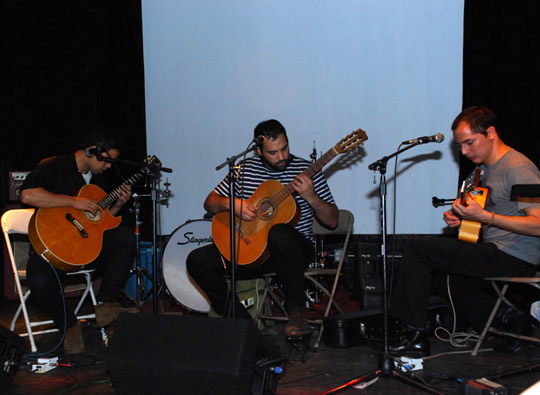 So instead headed to Public Assembly (QRO venue review) for the first time of Northside, and only second time at all, for the showcase by the about-to-move, used-to-have-a-back-venue Sound Fix (QRO venue review).  And it was my first time in Public Assembly's back room (which I always thought was downstairs, even when I was leaving…), intending to see Death Vessel (see below), but had to wait through Twi the Humble Feather setting up & playing (though only twenty minutes – at least they knew they were running late). 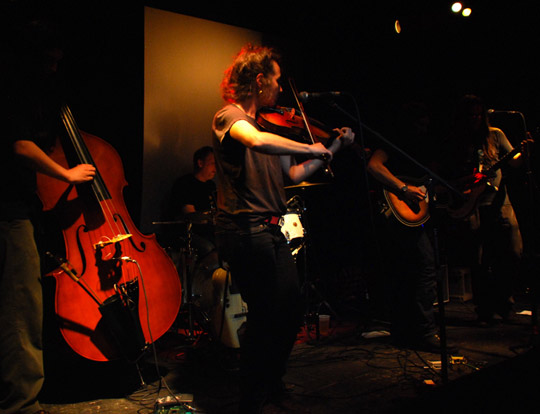 One thing Public Assembly did have going for it were some seats, fused wooden folding chairs from old theaters – though, after Twi, some large, middle-aged woman told me that someone was sitting in the seat I had previously been sitting in, and no one ever came there (I later got another seat).  Death Vessel are, like I'd been told, some pretty good alt-Americana, something Brooklyn's got more of than you think, though this time wasn't as favorable as when I'd see Savoir Adore earlier in the day (see above).  Though they did have a legitimate mike-gripe, as the lead singer's microphone just went dead (which was also easy enough to fix). 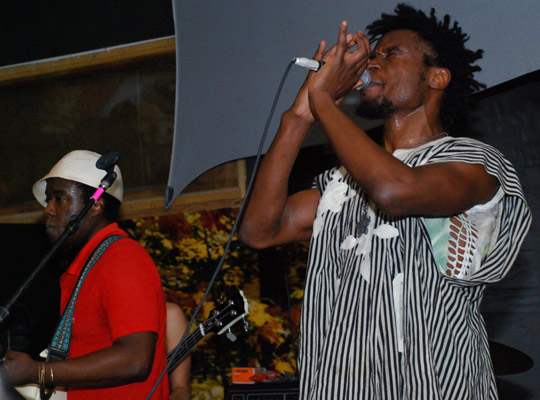 It's been about two years of missing Dragons of Zynth for me, from getting there too late for their opening slot at a Central Park Summerstage (QRO venue review) before Apples in Stereo (QRO album review) in 2007 to getting there too late for their early set at last year's Siren (QRO recap).  So made it a priority to finally catch them at Northside – and this time they were playing late.

Too late, as it turned out.  By the time their set came up at Glasslands Gallery, was worn out (and the weather – and difficultly finding Glasslands – didn't help, either).  Had learned that Glasslands was way too dark on Thursday (QRO Northside Day One recap), but it really hit home with Dragons of Zynth.  Managed to avoid the invisible steps, but almost sat in a puddle if two girls standing right by hadn't told me that there was a spill dripping down from the jury-rigged balcony.  Was tired from the walking and in the dark, and what did Dragons do?  Debut new songs, of course…  Tried to stick it out for a few Coronation Thieves (QRO review) tracks, but, despite the band's energy, just couldn't muster enough interest and left fairly early in their set.

– O'Death (QRO album review) @ Music Hall in Williamsburg.  Playing an afternoon show meant that there was little competition for O'Death (QRO photos at a festival) – but also that it was hard to make it out that early…

– Asobi Seksu, with Cymbals Eat Guitars @ Music Hall in Williamsburg.  They were full of badges (see above), but later heard that the performance wasn't that great – everyone complaining about the light show.

– The Shivers @ Red Star Bar.  Once had to sit through The Shivers to get to see Thao & The Get Down Stay Down (QRO spotlight on) for free at Fordham student center (QRO photos of Thao from then) – and there was no alcohol on sale!  As someone said after seeing the underwhelming band then, "There's some time of my life I won't get back…"

– Grooms (QRO photos in Brooklyn) @ The Shank.  Later heard that Grooms' new drummer isn't good – and that was from someone who liked the band formerly known as Muggabears!