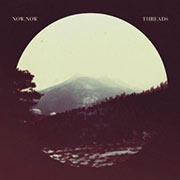 Now, Now is a young band.  Both in age and sound.  Fresh out of high school and with unweathered and unsuspecting faces, the band is still firmly located in the part of their lives dominated by the emotional moments of youth and fleeting love that are so arduously recreated by M83 (QRO live review).  The difference, apart from that Threads is guitar driven rather than synth ruled, is that M83 by his own admission is manufacturing these moments from memory whereas Now, Now is right in the middle of their heartbreaking youth.

It can feel a bit like an episode of Grey’s Anatomy – emotions run high, feelings are worn exclusively on the sleeve.  But unlike Grey’s Anatomy, Threads is not constructed with clichés and sexy doctors.  Threads is built on melancholy chord structures repurposed as battering rams.  Those battering rams are unleashed in the forlorn cries of "But I Do" and the drudging engine of "Prehistoric".

Click here for photos of Now, Now at 2012 80/35 Festival in Des Moines, IA in the QRO Concert Photo Gallery

Click here for photos of Now, Now at Terminal 5 in New York, NY on June 16th, 2012 in the QRO Concert Photo Gallery

Click here for photos of Now, Now at SXSW 2012 in Austin, TX in the QRO Concert Photo Gallery

Click here for photos of Now, Now at CMJ 2011 in New York, NY in the QRO Concert Photo Gallery

The result is a raw, unfiltered sound driven by churning guitar and led by Cacie Dalager’s fragile vocals.  But not fragile in a bad way – ‘fragile’ meaning tender, sometimes even sounding as though she was on the edge of tears.  Moments like that are strewn about the album, making for a bit of an emotional journey.  But there is fleeting bliss among the heartsick.  "Thread" builds from a frenetic opening to a sort of calm when Dalager begins with, "Find a thread to pull and we can watch it unravel," a statement that is equal parts a celebration of companionship and a foreshadowing of destruction.  But this is still not an album about picnics and holding hands.  It’s about sleepless nights and afternoons.  It’s about crushing breakups, big moving breakdowns, and everything that happens between the moment that love wanders away and the moment it wanders back.