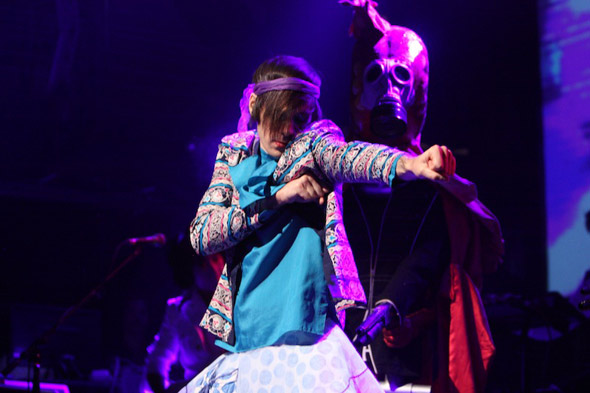 Fresh off of the release of their tenth studio album, of Montreal rolled into New York City to play two nights at Terminal 5 (QRO venue review) with False Priest (QRO review) guest Janelle Monáe in tow as their opening act, September 17th & 18th.  Monáe’s strong voice as well as her out of this world dancing and stage presence brought a real charge into the room to begin the evening.  Guitarist Kellindo Parker rocked out at stage left throughout Monáe’s 60-minute-ish set.  The energy really never let up until the lights dimmed to little more than a spotlight on Monáe and Parker as they covered “Smile”, written by Charlie Chaplin, off of her first EP, Metropolis: Suite I (The Chase).  Sadly, that was the only track off of that album that was played, leaving standouts “Many Moons” and “Violet Stars Happy Hunting!” off of the set list.  Monáe closed out her set with “War of the Roses (Come Alive)”, black and white balloons everywhere and a stage dive right into the waiting arms of the crowd.  If you ever have a chance to catch Janelle Monáe live, don’t pass the opportunity up – she’s really something else.  Her limitless ambition and passion for art and performance ensures that she’ll be around long after she’s gone.

Click here for photos of of Montreal at 2011 80/35 Festival in Des Moines, IA in the QRO Concert Photo Gallery

Click here for photos of of Montreal at 2011 Primavera Sound Festival in Barcelona, Spain in the QRO Concert Photo Gallery

Click here for photos of of Montreal at The Ritz in Tampa, FL on January 15th, 2011 in the QRO Concert Photo Gallery

Click here for photos of of Montreal at Firestone Live in Orlando, FL on January 13th, 2011 in the QRO Concert Photo Gallery

Monáe’s band uses many of the same instruments as of Montreal’s new, larger tour lineup, so the turnaround time in between sets was a quick 20 minutes or so.  The house lights dimmed and, one by one, the band took the stage clad in all-white outfits accented with a sort of reflective material and caked-on white face paint.  New drummer Clayton Rychlik counted things off and the band dove headfirst into “Black Lion Massacre” which is an unreleased track off of an upcoming EP tentatively titled The Controller Sphere, which is set to be released sometime next year.  It’s a song which lead singer/songwriter/producer/brainchild Kevin Barnes claims he “didn’t have the balls” to put on False Priest.  It’s a mix of violin-plucking, pulses of harsh and noisy drums, synths and it’s one of the more experimental sounding things of Montreal has played in recent memory – and that’s counting everything off of Skeletal Lamping.  Accompanied by disturbing imagery on the projector screens and strange fish-wearing-gas masks with half-robot bodies holding guns coming on stage, Barnes appeared seemingly out of thin air and launched right into the lead single from the new album, “Coquet Coquette.”

of Montreal now plays completely without any sort of backing track and the band is able to replicated just about all of the sounds heard on the albums.  The introduction of Nicolas Dobbratz (Sugar & Gold), Kaoru Ishibashi (violin/guitar/synths) and Thayer Sarrano (synths/guitar/percussion) allowed Barnes to roam around the stage doing whatever he damn well pleased.  You name it, he was doing it.  Singing?  Check.  Dancing?  Check.  Playing the tambourine?  Check.  Pretending to fornicate with people in body suits and pig masks?  You bet!  The only thing he wasn’t doing was playing a guitar – he didn’t pick one up once and he seemed to be having a good time without it.

The two featured artists (a first for any of Montreal album) on False Priest, Janelle Monáe and Solange Knowles, were notably absent from most of the set.  The former only came on stage briefly to sing with Barnes on “Enemy Gene” and the latter wasn’t anywhere to be found for “Sex Karma”, the duet from the new album.  However, the band did make up for it with an extended outro to the song made up entirely of percussive instruments, which lead nicely into another track from the new album, “Girl Named Hello”.  The set list was understandably very heavy on songs from False Priest as it was a show on that album’s tour.  Which is a great thing, because the new album is great, but it left out two of the strongest tracks, “I Feel Ya’ Strutter” and “You Do Mutilate?” (possibly one of their best ever), in favor of “Casualty of You” and “Around the Way”, also from the new album.  While visually (the theatrics, costume changes for Barnes and projections/lighting) and sonically (Barnes sounded wonderful and Dan Korn, of Montreal’s sound guy, rules) they’ve never been better, the show suffered from pacing and too many slow songs towards the middle of the set.  They got the crowd all amped up on an extended “She’s a Rejecter” and then followed that with a super obscure cover (“Tonight” by Sibylle Baier – great song, check out the whole album) and two slow songs that Barnes sang while completely while hidden under a shimmer-y material and noose around his neck.  People in audience looked lost, confused and even a little bored.

Before all was said and done, of Montreal closed things out on a high note with crowd favorites “Heimdalsgate Like a Promethean Curse”, “For Our Elegant Caste” and “A Sentence of Sorts in Kongsvinger”, before coming back out for an encore which consisted of a medley of Michael Jackson hits from Thriller, including the title track, “Wanna Be Startin’ Somethin'” and “P.Y.T.  (Pretty Young Thing)”.  The band sounded awesome and Barnes has the perfect voice to cover M.J.  It quickly turned into a dance-off between members of Janelle Monáe’s band and other Wondaland Arts Society members as well as members from of Montreal and their crew.  They looked like they couldn’t have been having more fun if they tried, at one point, leading Barnes to exclaim “This is the best night of my life” and one is willing to bet that a lot of the people in that crowd would agree.