<img src="http://www.qromag.com/wp-content/uploads/2011/01/ohlandohlandep.jpg" alt=" " />Denmark is getting into the Scandinavian songstress game with Nanna Øland Fabricius, a.k.a. Oh Land. ... 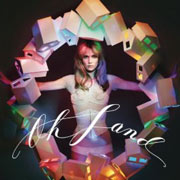 A few years ago, right after everyone had grown tired of the ‘Canadian Invasion’, Sweden was the next big thing in indie music (QRO’s ‘Swedish Sensations’), starting with Peter Bjorn and John (QRO spotlight on), and continuing with a host of Swedish songstresses (many of whom have sung guest vocals at one time or another on PB&J’s breakthrough "Young Folks"), such as Victoria Bergsman (a.k.a. Taken By Trees – QRO album review), Sarah Assbring (a.k.a. El Perro Del Mar – QRO live review), Anna Ternheim (QRO album review), and, most recently, Li Lykke Timotej Zachrisson (a.k.a. Lykke Li – QRO album review).  To American eyes & ears, Denmark isn’t that different from Sweden (especially Copenhagen vs. Malmö…), and it could have the next generation of Scandinavian female singers, like Mette Lindberg of The Asteroids Galaxy Tour (QRO live review), and now Nanna Øland Fabricius, a.k.a. Oh Land.

Click here for photos of Oh Land at Paradise in Boston, MA on March 7th, 2011 in the QRO Concert Photo Gallery

Click here for photos of Oh Land at Spaceland in Los Angeles, CA on February 2nd, 2011 in the QRO Concert Photo Gallery

Click here for photos of Oh Land at CMJ 2010 in New York, NY in the QRO Concert Photo Gallery

A debut, self-titled, four-song EP is basically about making a first impression, catching the listener’s ear before settling down and reeling it in with a full-length, and Oh Land EP does that.  Opener "Sun of a Gun" is certainly in the vein of today’s Scandinavian electro-pop – well balanced between artsy and catchy (will they ever live down ABBA & Ace of Base?…), while it and the following "White Nights" are brighter, more growing/glowing than recent Nordic songstresses.  But Oh Land also has a darker side, more removed and chilling in "Rainbow", though closer "Wolf & I" is relatively a little unimaginative.

At CMJ 2008 (QRO recap), Lykke Li was the consensus ‘break out’ of the industry music festival.  Oh Land already had some buzz behind her going into CMJ 2010 (QRO recap), played about a million shows in the five-day span, and came out with a lot more buzz.  Similar enough to ladies from across Øresund (or ‘The Sound’, the actual name of the straight between Copenhagen & Malmö) to be pleasantly familiar, while different enough to be her own woman/nation (does make you wonder where the ladies of Norway are at – Iceland’s already got theirs…).