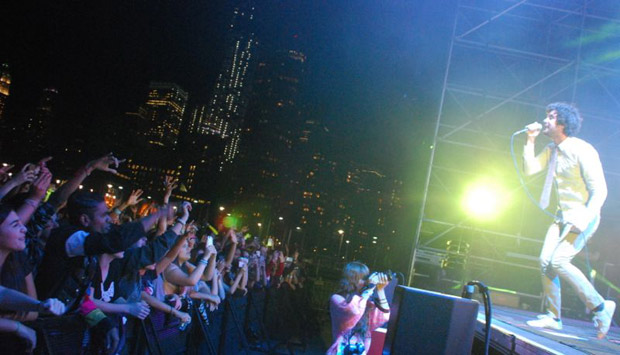 Photos of Passion Pit at SXSW 2015 in Austin, TX

Photos of Passion Pit at 2013 Camp Bisco in Mariaville, NY

QRO’s review of Passion Pit at Crystal Ballroom in Portland, OR on December 3rd, 2012

Photos of Passion Pit at The Backyard in Austin, TX on September 15th, 2012

QRO’s review of Passion Pit at Bank of America Pavilion in Boston, MA on June 22nd, 2012

Photos of Passion Pit at 2011 Moogfest in Asheville, NC

Photos of Passion Pit at SXSW 2009

It is easier than ever these days to be a one-hit wonder – and to be only a one-hit wonder.  Thanks to iTunes and mp3s, the album is dead and the song is king, and thanks to the internet, it’s easier than ever for a song to ‘sweep the nation’.  But what do you do after that?  There’s the rub.  Doing it right is Boston’s Passion Pit, who came to New York to play two nights at the new Pier 26 on the Hudson, Friday & Saturday, September 6th & 7th.

For Passion Pit, that ‘one hit’ was “Sleepyhead”.  Originally the leadoff track to the self-made Chunk of Change EP, which singer/songwriter Michael Angelakos gave to girlfriend at Emerson for Valentine’s Day, the oh-so-sweet electro-dance tune “Sleepyhead” caught ears across the country – even if the rest of Change didn’t.  Still, debut full-length Manners (QRO review) delivered well for both the critics and the market, and the future looked bright after the band were signed by major imprint Columbia Records.  But after follow-up Gossamer (QRO review) came out, its tour was cancelled as Angelakos sought treatment for bipolar disorder, and things started to dim.

Well, Angelakos & Passion Pit have returned in force, first making up those dates earlier this year (including at Madison Square Garden – QRO review), and now a second fall tour.  And they’re far more than “Sleepyhead” – or even just a couple of singles. 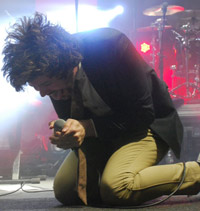 This being the tour after the Gossamer tour, the band was more able to mix and match from the two records, roughly evenly and a lot of Manners up early, starting with “Make Light” and “The Reeling”, but also “Moth’s Wings” and “To Kingdom Come”.  Angelakos was bounding upon the stage as always, eschewing the mikestand for singing to the crowd (on all sides of the large Pier 26 stage), even collapsing to the ground at times (such as during “The Reeling”).  The rest of Passion Pit (who all went to Berklee School of Music, so they’re no slouches in the skills department…) were admittedly pushed back kind of far on the stage – probably to give Angelakos more room to move, but combined with the somewhat excessive smoke machine, made them rather hidden. 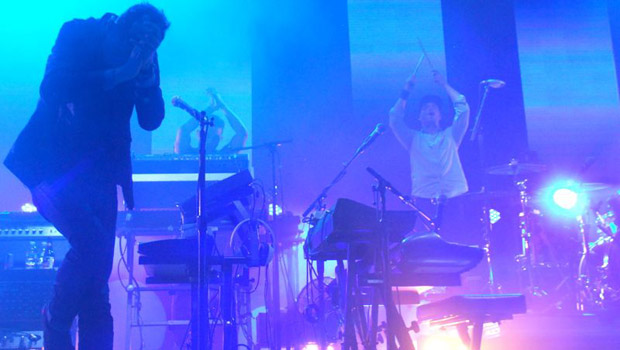 The venue, however, was perfect for Passion Pit – and their fans.  The audience naturally tended towards the young & female at the all-ages space, but the ladies brought their boyfriends (it was kind of the perfect setting for guys to put girls on their shoulders) – or dads, in some cases (one hopes that older guy was her dad…).  The pier was wide enough, which can otherwise be a problem – see fellow Hudson River Park pier Pier 54 (QRO venue review) up the river for a too-tight space, and Pier 84 (QRO review) farther up for a better space.  Of course the drinks were too expensive, but at least one tent sold out, and a beerman was spotted (essential when the stage is so far from the bar) – and the food trucks did incredible business, with each one having a line that bisected the pier (Dove was also oddly giving out samples of bodywash…).  And the whole thing was in the shadow of the Freedom Tower – plus there were randomly some fireworks coming from a bit north on the New Jersey side. 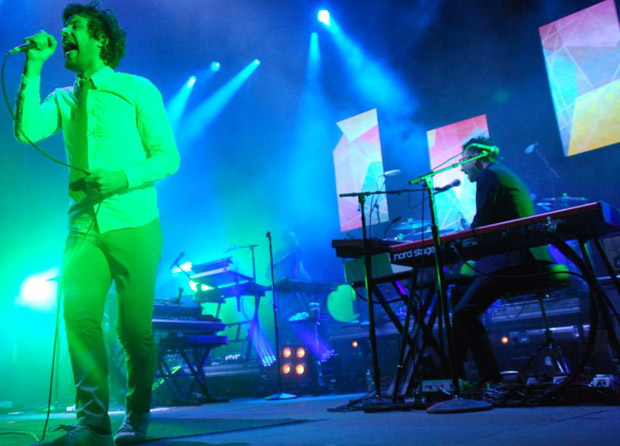 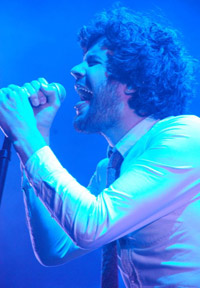 The latter half of the set had more singles – but not just singles.  Passion Pit played Change’s “Smile Upon Me” for the first time in over a year, dedicating it to, “All the Chunk of Change fans out there.”  Gossamer’s “Where We Belong” meanwhile was dedicated to their manager Rich – and between those two was that album’s own amazing single, “Take a Walk” (QRO review).  An ‘immigrant’s song’ for the post-recession twenty-first century, its story of the upwardly mobile émigré foiled by a downturn in the market has real power – and uplift (so uplifting that Angelakos got everyone to raise both hands at the start – even “the people from the label…”).

It also proves that Passion Pit are more than just “Sleepyhead” – but you didn’t need to leave Manners to know that.  “Sleepyhead” was not the evening’s closer but ‘just’ the song into the encore break, and of course it was great.  But the band wasn’t done, returning with Gossamer’s “Cry Like a Ghost” – and then actually closed the night out with Manners’ “Little Secrets”.  Initially overshadowed on that album by “Sleepyhead”, the piece has more than grown into its own (it also closed their great set earlier that week at Live On Letterman), “Higher and higher / Higher and higher!” – the trajectory of Passion Pit. 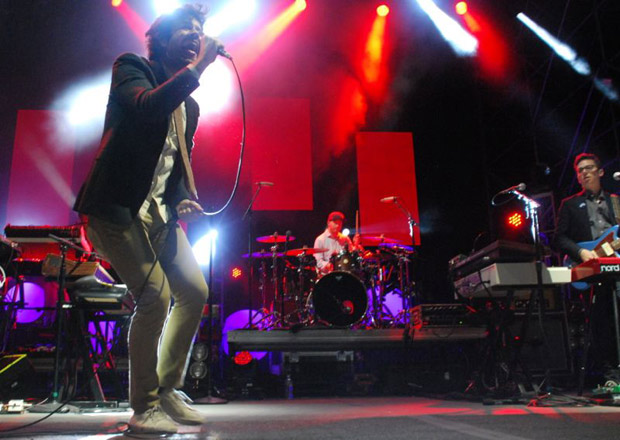 [editor’s note: your correspondent’s time at Pier 26 was marred by incredibly confusing instructions from security, about what to do after shooting the standard first three songs from the photo pit – at first told one that, after shooting, one had to check your photo bag at the box office, all the way on the other end of the pier, but the box office contradicted that after shooting opener Best Coast – QRO photos – only for the instructions to come down again after Passion Pit, though there was no place to check one’s photo bag, leaving photographers who wanted to see the show high-and-dry.  Thankfully Passion Pit’s tour manager intervened and gave wayward photographers a place to store their bags, after much confusion, walking, and waiting around from security.  But this was the final show at Pier 26, and word is that the Bowery Presents space won’t come back next year thanks to noise complaints from the Wall Street neighbors…] 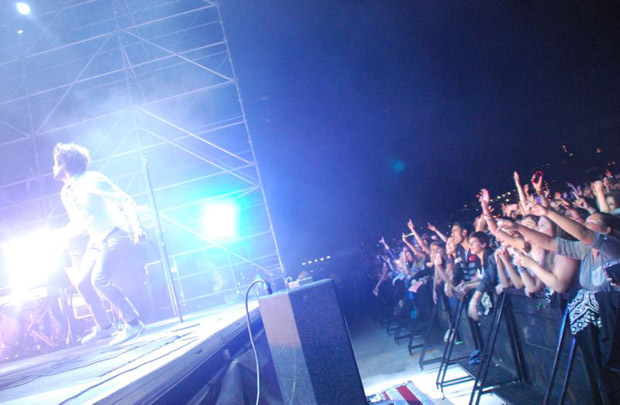