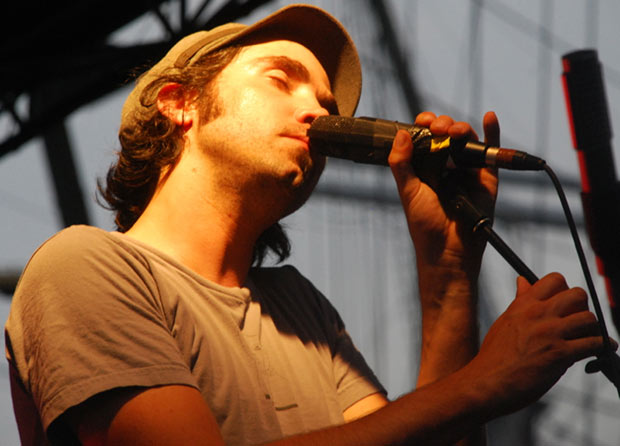 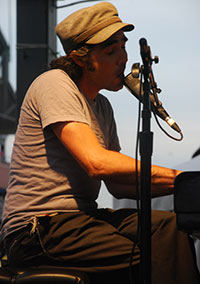 When the summer 2012 line-up of free, outdoor shows began to be announced this spring, a few shows stood out, like George Clinton & Parliament/Funkadelic playing Rockefeller Park on July 12th for River-to-River Festival (though shouldn’t he be playing River-to-River’s Castle Clinton – QRO venue review?…) – but also Patrick Watson & Loney Dear playing South Street Seaport the preceding Friday, July 6th, for Seaport Music & River-to-River.  The two indie-auteurs are acclaimed singer/songwriters from chilly, non-Anglophone climes (northern Quebec for Watson, Sweden for Emil Svanången, a.k.a. Loney Dear), who have been trafficking in orchestral beauty via folk melodies for years now.  And they did not disappoint.

Click here for all of QRO’s coverage of Loney Dear in ‘Spotlight On : Loney Dear’ feature

Loney Dear was up first – ‘up’ being a relative term, as not only was he sitting during his performance, not only was his almost his entire band (the bassist had to stand at points), but even the crowd sat on the wooden Pier 17 (QRO venue review).  While sometimes 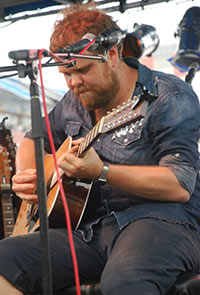 Svanången and/or his keyboardist had to sit to twinkle the ivories, he also was seated when on guitar, and her when playing strapped-on accordion.  Everyone sitting at a show can often draw the energy and life out of a performance, but at South Street Seaport it created the atmosphere of a ‘concert in the park’, complete with blankets & picnic baskets (and feeding little children on the former from the latter) – only a lot more intimate and immediate.  The mall next door and the rest of the plaza might have been bustling with commerce, but Pier 17 had relaxed beauty under the hot sun. 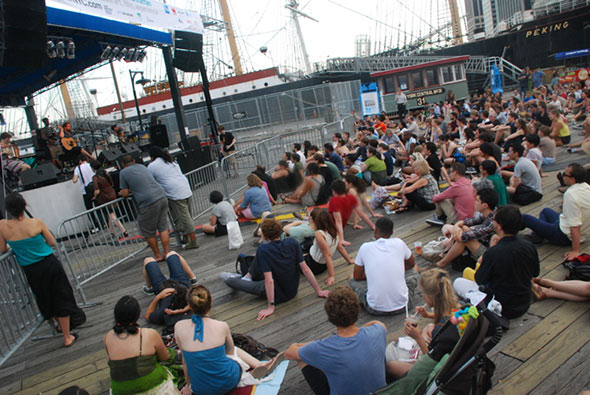 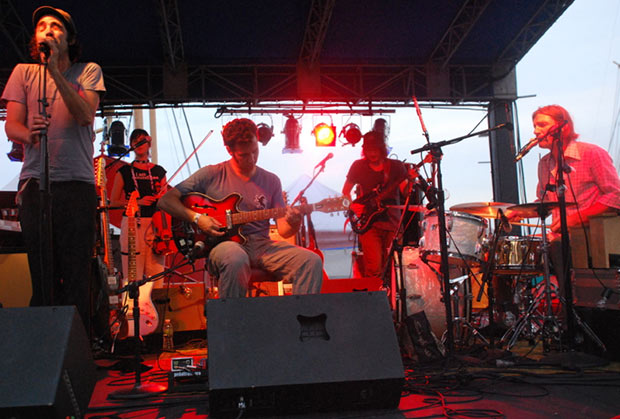 Still, the crowd did stand up for Mr. Watson (as the sun began to set), even when he was seated at his piano – and guitarist Simon 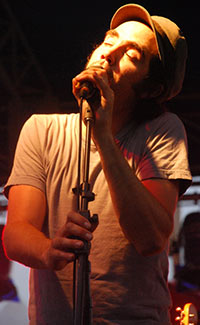 Angell took his own usual seat as well, leaving only bassist Mishka Stein and their guest violinist & horn player to stand (drummer Robbie Kuster was seated as well, even when playing the bow saw).  Watson & co. stuck nearly completely to their latest, Adventures In Your Own Backyard (QRO review), and even close to the track list, playing the first, second, fourth, and third songs from the record in that order.  It was a subdued but moving beginning – though almost marred by a foghorn blaring on the East River during opener “Lighthouse”, but Watson only laughed at the irony. 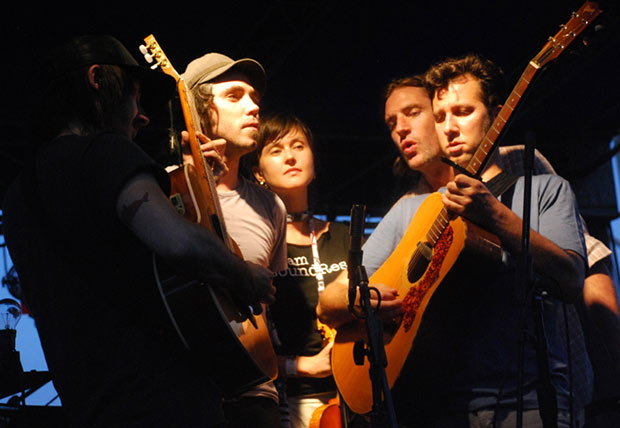 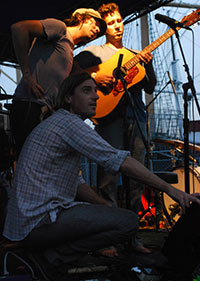 Watson and the rest did eventually stand up – and around one mic for two songs.  First Watson, Angell, and Kuster huddled around one mic, bluegrass-style with Kuster on bow saw, for “Words In the Fire” (which Watson joked had been written when the group was invited by some teenagers to play at their bonfire party, but then were asked to play Bob Marley songs…).  Then Stein & the violinist joined them (for now five musicians at one little mic) for “Into Giants” – they’d even lean in and away from the mic, depending on who was singing/soloing.

The group returned to their ‘normal’ set up, but only for one song (“Strange Crooked Road”), before all but Watson left – and Svanången came on, as the two sat on the same small piano bench (Watson offered to share it

after Svanången initially said he’d play while kneeling) for “Big Bird In a Small Cage”.  The piece from 2009’s Wooden Arms (QRO review) – which Watson joked he’d written for Dolly Parton, but Svanången “will do” – was already a special piece, but was definitely amplified by the two artists performing so closely together.

Svanången left and the rest of the band returned for three more pieces from Adventures to close the night, but Watson was able to get a one-song encore under the curfew wire, “The Great Escape” from the 2007 Polaris Prize-winning Close To Paradise (QRO review).  Two special artists + one special location = a special night. 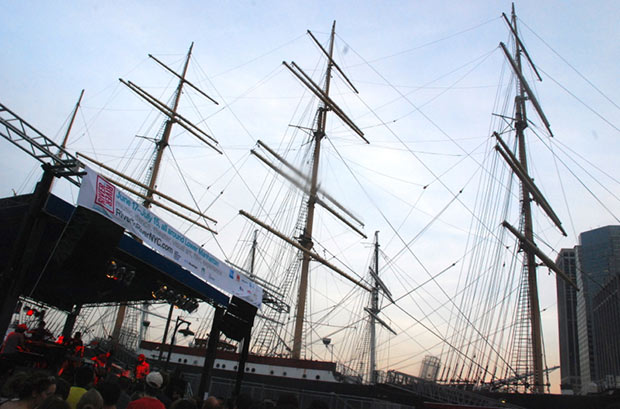