Phoebe Bridgers truly put together a beautiful and cathartic experience, which will probably be a night that many in attendance will never forget. ... 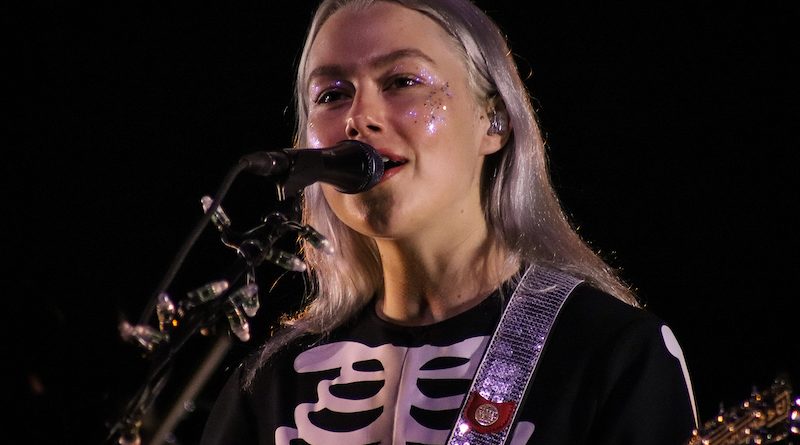 Click here for photos of Phoebe Bridgers at 2021 Shaky Knees in Atlanta, GA in the QRO Concert Photo Gallery

As Phoebe Bridgers entered the stage in her famous skeleton onesie paired with a glitter highlight and a huge smile on her face while dancing along to the lyrics, “I gotta feeling that tonight’s gonna be a good night,” the stage was already set for how the rest of the night was going to go. Although many tours tend to skip over Louisville, the fact that fans began lining up at 7am for the fully general admission show on Sunday, September 5th proved that the crowd was ecstatic she did not skip over Louisville on this tour. Despite being up all day waiting in line, the fans did not lose their energy throughout the entire hour and a half long set at Louisville’s Iroquois Amphitheatre.

Shortly after the singer’s famous Christmas lights had been wrapped around her microphone stand and the setlists had been taped to the stage, the lights faded in the packed amphitheater as “I Gotta Feeling” by the Black Eyed Peas began to play. Although the vast majority of the crowd probably already had a feeling that it was going to be a good night, Bridgers entering the stage to this song only reinforced that feeling. As the song faded out, screams erupted as Bridgers kicked off the night with her hit “Motion Sickness”. This was a perfect song to begin the set with, as almost everyone in the crowd was jumping and screaming every lyric at the top of their lungs.

The screen behind Bridgers featured an interactive storybook which flipped pages sequentially between each song throughout the night. It was obvious that Bridgers had put a lot of thought into all aspects of her show, especially the visuals. Each time the book flipped to a new page, it either featured the name of the song which she was performing or visuals that corresponded to the song. There were many other visual aspects that Bridgers obviously put a lot of thought into, such as the stage props that would rotate between songs, featuring everything from jack-o-lanterns while she performed “Halloween”. to bookshelves and candles during “Savior Complex”.

Bridgers’ vocals during the show were immaculate. She didn’t miss a note all night. In fact, she might have sounded even better live than she does on recording. It was obvious that she wanted to put on the best show possible for her fans, seeing as how she re-started the performance of “Punisher” after being almost half-way through, simply because the cues were off and she forgot a few of the words. There were no complaints from fans though, as many were just happy to be in her presence for a little bit longer.

Although many of Bridgers’ songs are known to be on the more sad and slow side, the crowd seemed incredibly happy throughout the night and unified by their shared emotions. “We were all united by these super sad songs, but the fact that we all shared in those emotions made them seem less depressing,” stated one fan in attendance that night.

The audience did more than just show up for Phoebe Bridgers’ show. The amount of signs and costumes throughout the crowd were amazing, and it was obvious that Bridgers thought so as well. She was beaming with a smile from the second she stepped foot on stage to the second she stepped off. There were numerous people in ghost costumes, referring to the cover of Bridgers’ debut album, Stranger in the Alps, and the amount of people in skeleton onesies, Bridgers’ staple outfit, was impossible to even count.

The environment created by Bridgers at the show was something so special and noteworthy. Everyone in the crowd was so kind and welcoming; it seemed as though everyone recognized and appreciated the fact that they were all there for the same reason and most likely shared similar feelings as expressed in Bridgers’ songs. She created such a safe space that night in Louisville, and the audience definitely noticed it. “It was such a safe and incredible environment,” stated another fan, “Everyone was so nice and dressed so well that just waiting in line was a cool and exciting thing, and I think that really speaks to the kind of people Phoebe’s music and Phoebe herself resonates with.”

One of the most notable parts of the night had to have been the last song before the encore, “I Know The End”. Many may recognize this song from Bridgers’ debut Saturday Night Live performance back in April, but actually witnessing this song live and in person was a million times more amazing. The outro was bone-chilling, as the whole audience was simply screaming at the top of their lungs alongside Bridgers. “I Know The End was my favorite part,” recalled a fan who had been in attendance, “It ended in a huge catharsis moment where everyone was just screaming their lungs out.”

Bridgers truly put together a beautiful and cathartic experience on September 5th, which will probably be a night that many in attendance will never forget.