There are two kinds of people: people who love Phoenix, and people who just haven’t heard them yet.... 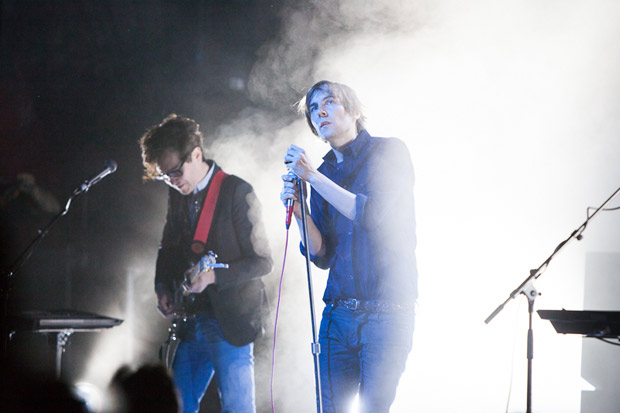 There are two kinds of people: people who love Phoenix, and people who just haven’t heard them yet.  The Versailles band broke through in an incredibly wonderful way in 2009 with the incredibly wonderful Wolfgang Amadeus Phoenix (QRO review), making them beloved around the world.  But with that success came the inevitable risk of failing to live up to it.  After a well-advised break, Phoenix returned this year with Bankrupt! (QRO review), which added more synthesizers in order to not just be ‘Wolfgang Amadeus Phoenix II’.  But really nothing compares to seeing the band perform live, like at New York’s storied Apollo Theater on Monday, May 13th. 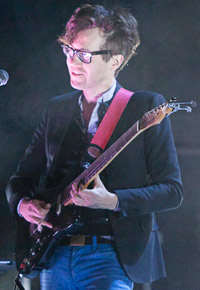 Yes, you read right – a French indie-rock band played Harlem’s Apollo.  Between construction and The Knicks in the playoffs, Madison Square Garden (QRO venue review) has had to farm out some rock ‘n’ roll shows to spots further uptown – in both location and class, such as Radio City Music Hall (QRO venue review), Beacon Theatre (QRO venue review), and The Apollo.  It helps that MSG either owns or operates all of those venues.  Still, it was probably the first time a good percentage of the crowd had ventured that far north in Manhattan – you could tell pretty easily who of the people getting off at 125th Street subway stop was there for the show.  The bar at The Apollo was particularly overworked, with long, achingly slow lines, but it’s actually not that far back in the smaller-than-you-would-have-expected space (which does have two balconies pretty near the stage). 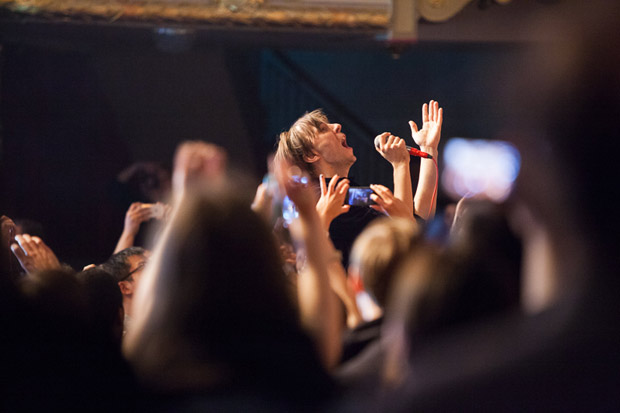 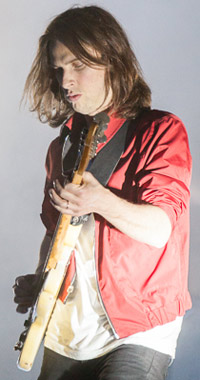 But it still wasn’t close enough for Phoenix singer Thomas Mars, who only a few songs in called on the crowd to “Come up to the front / Come up to the front” as chorus to Wolfgang’s “Lisztomania” – and Mars proceeded to also go into the crowd, climbing over seats.  Mars would go into the crowd three more times, often singing to the balcony – maybe to make up for failing to climb into the balcony, which he tried to do via climbing the house-left speakers and into the nearby box seats. 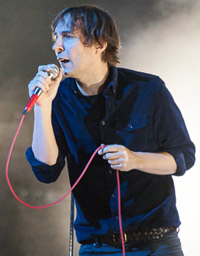 The evening began & ended with Bankrupt! opener “Entertainment”, and the show was certainly that.  Admittedly, Wolfgang pieces got more of a rapturous response than Bankrupt!, but it’s pretty damn hard to top such wonderful numbers as the following “Lasso” and “Lisztomania”, not to mention “1901”, where Phoenix went into their encore break – after Mars had headed back out into the crowd again (ending up right near where Nikolai Fraiture of The Strokes – QRO album review – was).  The two most recent records dominated the set list, with only two songs from each not played (“Bourgeois” and “Oblique City” from Bankrupt!, “Love Like a Sunset” parts I & II from Wolfgang).  Thus the band did include Bankrupt!’s title track, a synth instrumental that saw the backdrop change in many glowing colors.  There were only two older numbers, “Too Young” from 2000 debut United, which segued directly into a uproarious rendition of Wolfgang’s “Girlfriend” (somewhat ironically, considering “Young” was their contribution to the Lost In Translation soundtrack – and Mars is now married to Translation’s director, Sofia Coppola…), and “Long Distance Call” off of 2006’s It’s Never Been Like That – the title to that record came from the great chorus line on “Call”. 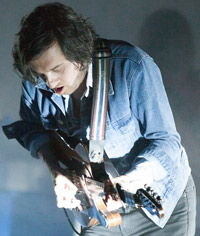 After Bankrupt!’s “S.O.S. In Bel Air”, the evening did get a little slow in songs like Wolfgang’s own disco-dance number, “Fences”, then “Bankrupt!” and “Too Young”, before “Girlfriend” brought it back to a fevered pitch.  There was a nice three-part segue of “Trying To Be Cool”, “Drakkar Noir”, and “Chloroform” – the same order as on Bankrupt!.  Later, only Mars and guitarist Laurent Brancowitz returned from the encore break to perform a stripped-down version of Wolfgang’s “Countdown” – with Mars singing from the front row, of course.  The rest of the band came on stage for Bankrupt!’s “Don’t” and Wolfgang’s “Rome” to close the evening out, before ending with a reprise of “Entertainment” – and one more expedition into the audience for Mars…

Phoenix are coming off playing Saturday Night Live (QRO Indie On Late Night TV) and headlining Coachella last month – and later in May will headline Barcelona’s Primavera Sound (QRO preview).  But there’s nothing like seeing them up close & personal – in a space fit for Louis XIV… 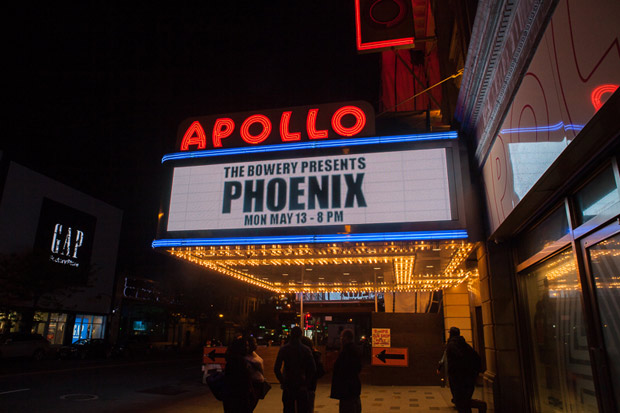