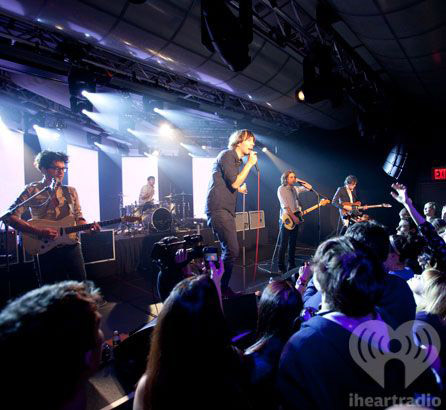 Click here for photos of Phoenix the night before at Hammerstein Ballroom in New York, NY in the QRO Concert Photo Gallery

It has been a very good year for Phoenix.  The Versailles, France band has been blowing up all over the place, from Saturday Night Live (QRO Indie On Late Night TV) to car commercials.  On Thursday, December 3rd, they got the news that their Wolfgang Amadeus Phoenix (QRO review) was nominated for a Grammy, one night after playing to a sold-out crowd at Hammerstein Ballroom (QRO photos).  So it was extra-special to see them live, right after getting the latest accolade, at the intimate PC Richard & Son Theater (QRO venue review).

The new TriBeCa venue hosts small shows, which are only available to contest winners & VIPs, with some of the biggest names in music, and Phoenix is becoming one of those.  Wolfgang is already burning up everyone’s 2009 Top 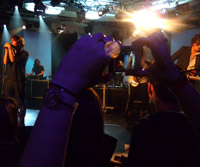 10 lists, as is single “Listzomania”, which kicked off the set & lit up the crowd.  Literally ‘lit’, as lots of fan pulled out their cameras & camera-phones to capture the band – some seemed to be videoing the entire set with their point-and-shoots (one girl 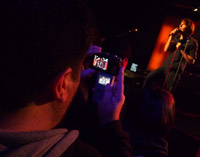 raised hers high above everybody’s heads for each & every song, while one guy was using two at the same time!…).  It was actually a shame, as, in addition to blocking other people’s views, videoing meant that the amateur videographers had their eyes fixed on their cameras, and not the great band, mere feet away from them. 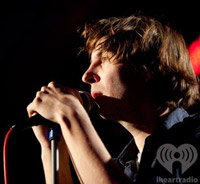 While it might seem like Phoenix came out of nowhere this year, Wolfgang is their fourth record, and the band followed “Listzomania” with “Long Distance Call” from their prior album, It’s Never Been Like That.  It was a nice move, to go back a bit before hitting up two Wolfgang numbers that easily could be singles, “Lasso” and “Girlfriend”.  The whole band was very animated, from singer Thomas Mars encouraging one & all to clap during one song, to leaps & bops from brother guitarists Laurent Brancowitz & Christian Mazzalai on either end of the stage – though bassist Deck D’Arcy was the most active on the stage.  Well, stage floor, as touring drummer Thomas Hedlund couldn’t have been more exuberant. 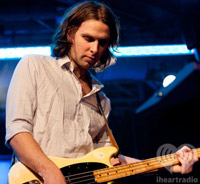 But Phoenix doesn’t depend on that energy, as they showed with their subdued & quiet “Playground Love” (written with Air – QRO album review – their friends and not only countrymen, but fellow Versailles locals).  It was just Mars’ lovely voice and Brancowitz’s restrained guitar, for a real mood-changer.  Yet the band were easily able to bring it back to eleven with Wolfgang single “1901” – which unfortunately was their last song of the night.  The crowd kept cheering for more, even after the house music started to play, but to no avail.  You can’t blame Phoenix for being exhausted at the end of 2009 – or the fans for wanting to keep them on stage for just a little bit longer… 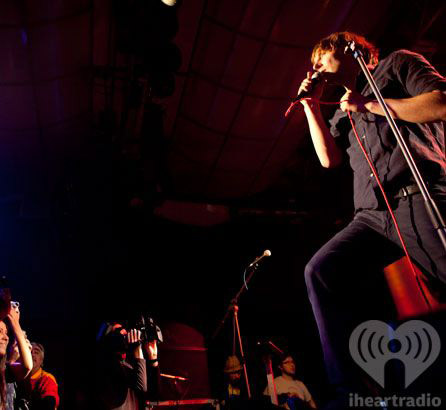 The Shaky Hands : Let It Die