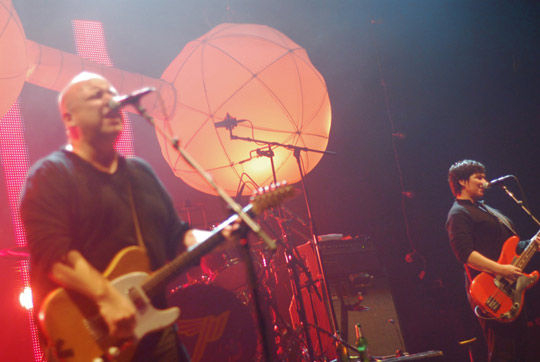 Click here for photos of Pixies, earlier on this tour, at Troubadour in Los Angeles, CA on November 5th, 2009 in the QRO Concert Photo Gallery

When does a return become a retread?  And how does it get back to being a reunion?  When the Pixies reunited at Coachella in 2004, they basically invented the indie-rock reunion that has become so big these days (though others had done it before them, such as Mission of Burma – QRO live review).  But even as they paved the way for the reunited likes of Dinosaur Jr. (QRO live review) and next year’s eagerly-anticipated sold-out dates from Pavement (QRO album review), Pixies were criticized for not doing what either of those acts are doing: Pixies didn’t release any new material, unlike Dinosaur Jr.’s Beyond (QRO review) & Farm (QRO review), and their return was far more extended than Pavement’s looks to be.  By the time of their 2006 tour (which was originally supposed to be part of a touring Lollapalooza, before that festival put down roots in Chicago – QRO Festival Guide), many called the ‘greatest hits tours’ just cash-ins.  Singer/guitarist Black Francis went back to his solo work as Frank Black (though later changed his solo name back to his Pixies-era moniker – QRO album review – and even teamed up with his wife, as Grand Duchy – QRO album review), while singer/bassist/rival Kim Deal had her own, second reunion, with her sister Kelley, bringing back their post-Pixies Breeders (QRO live review). 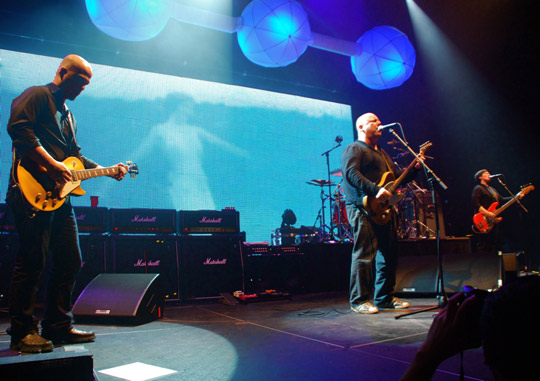 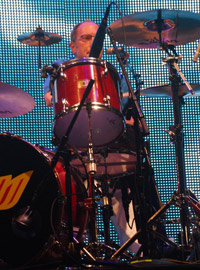 So how does this return of the return of the Pixies make itself stand up & stand out?  Well, there is word that they’re going into the studio next year for a new album, but most fans are of the ‘I’ll believe it when I see it’ school of thought on that.  Right now, for the holidays, all of the Pixies’ material is compiled into the massive Minotaur boxed set.  And, in celebration of the twentieth anniversary of the release of their seminal Doolittle, Francis, Deal, guitarist Joey Santiago & drummer David Lovering are back to being back on the road, playing Doolittle and more; the tour hit New York’s Hammerstein Ballroom (QRO venue review) on Monday, November 23rd for the first of four dates in three days (there’s a special, second late show on Wednesday). 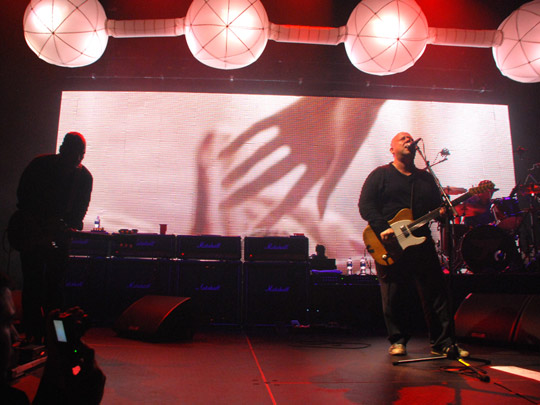 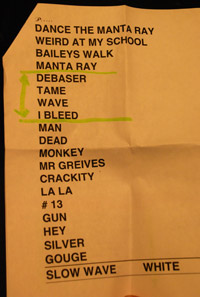 [note: Pixies/Hammerstein Ballroom had one of the most convoluted photo rule regimes ever encountered: press had to pick up their ticket at the front door/box office, but had to wait until right before Pixies went on to pick up their photo pass (meaning no photos from the pit of opener Black Gold – QRO live review, opening for Pixies in L.A.) – and had to leave Hammerstein to go get it, going up a block (cutting through the next door parking garage), and waiting at the venue’s back door.  Photographers were allowed to shoot the fifth through eighth songs, i.e. the first four from Doolittle, but could only listen from the backstage entrance ramp to the opening short film and four b-sides that started off the night.  And after the eighth song, one couldn’t reenter Hammerstein from the front if you had a prohibited professional SLR camera.

So your correspondent missed seeing the first four songs, was up close for the next four, and then had to leave, drop off camera at home, and return, making it back during the seventeenth (and that all is not even including the tour manager forgetting the press list to start off the night…).  Coverage is compiled from what was seen first-hand, and reporting from others] 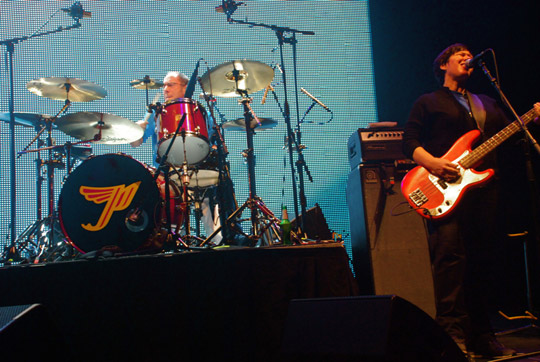 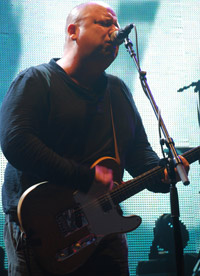 The show opened with the showing of the 1929 short film Un chien andalou by Luis Buñuel and Salvador Dali, one of the best-known pieces of surrealist cinema – and also a major influence on Pixies during the making of Doolittle.  The Pixies’ set list was altered, though not quite surreally so, as the band started not with the hits or Doolittle, but four b-sides from the Doolittle era (all also on Pixies’ The Complete B-Sides).  Tracks like “Dancing the Manta Ray” or “Bailey’s Walk” may justifiably be b-sides, and it’s a little weird to hear the band do not one, but two ‘Manta Ray’ songs in the first four of the night (fourth-and-final b-side was a different piece called “Manta Ray”), but it was a kind of a unique and interesting way to both celebrate Doolittle and yet not have the show be another ‘greatest hits’.  And “Weird At My School” did stand up pretty well. 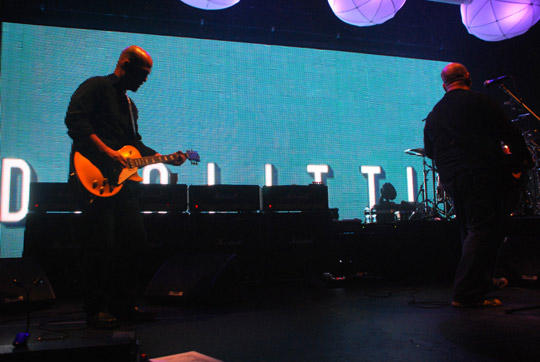 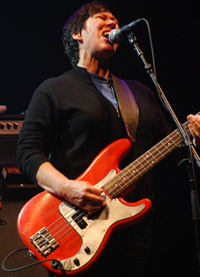 The unusual set list (for the tour, if not so much for the night – it was pretty much how Pixies have been playing this entire tour; back in the day, they’d do their songs in alphabetical order) continued, as the band proceeded to launch into all fifteen tracks from Doolittle.  Of Pixies’ four albums & an EP, Doolittle has generally been praised the most for its massive early influence on alt-rock, even if prior Surfer Rosa & Come On Pilgrim EP were catchier & more memorable, and final release Trompe Le Monde the most accomplished.  But that’s because Doolittle took the Pixies’ early promise and started building with it on songs like opener “Debaser”.  Live, classics like “Debaser” and single “Wave of Mutilation” got to get out of the ossification of time and really rock live.  Santiago’s guitar was noticeably sharper than on Doolittle – at first a bit jarring (as any change would be, especially when you’re hearing the songs in the same order as you had for years on your stereo), that was the kind of element that needed to be added to spice up a live show of a twenty-year-old album. 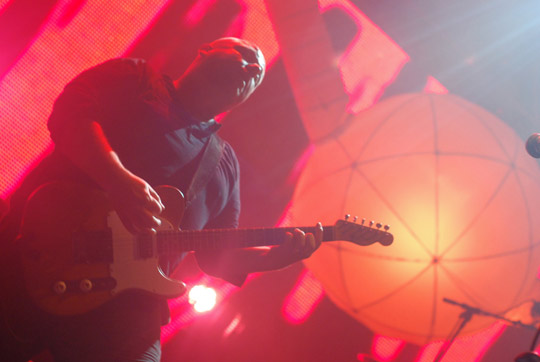 None of the songs on Doolittle are that long (only two are over three minutes on record), and the Pixies were likewise pretty fast on stage.  They also didn’t move around a lot, Santiago fixed on stage-right, Francis in the middle, Lovering on a drum-riser in the mid-back of stage-left, and deal just to Lovering’s front-left (stage-left seemed to be having more fun than stage-right – while Deal smirked and Lovering was giddy after the set, Santiago seemed to be scowling early on).  They did provide a great light show, thanks to a

massive jumbotron-like screen behind them, Hammerstein’s always-strong light show, and some large, dodecahedron-ish glowing globes, linked by horizontal pillars (like something from the cover of a sixties sci-fi paperback).  The screen came into especially strong use late in Doolittle, spelling out Francis’ key lyrics during “Hey”, and relaying live video of the crowd, shot from the photo pit, during Doolittle‘s final “Gouge Away”.

For their encore return, Pixies returned to Complete B-Sides in the slow version of “Wave of Mutilation (UK Surf)” and ended on the best b-side, “Into the White”, where the stage was filled with gusting fog and white light:

That may have been the last song on the Pixies set list, but the night wasn’t over – or rather, the audience at Hammerstein wouldn’t let the night be over.  It was a pretty quick twenty-one songs (especially for the rather-hefty ticket price…), and the sold-out crowd (in fact, likely over-sold…) demanded more.  Though starting with Francis’ Spanish-sung “Isla De Encanta” from Pilgrim was a bit of a curveball, Pixies still ended with ‘biggest hits’ “Where’s My Mind” and “Gigantic” from Surfer Rosa.  But the best of the rest had to be Pilgrim‘s “Nimrod’s Son” – “I am the son of a mother-fucker…”: 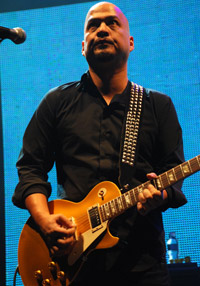 There is a reason the Pixies are so well-loved by such a strikingly broad array of fans – everyone from young kids to parents with young kids of their own were there (including one couple that brought their baby…), as each record has more than a few great numbers that you really wanted to hear – and thus many of them were going to be missed.  Other nights have featured later songs like “Planet of Sound” from Trompe Le Monde and/or “Dig For Fire” from the record after Doolittle, Bossanova.  And hearing the up-antics of “Nimrod’s Son” only makes one also wish for other instantly memorable classics like Pilgrim‘s “The Holiday Song” (QRO video of another band covering it) & “I’ve Been Tired”, or Rosa‘s “Bone Machine” & “Broken Face” (not to mention the hilarious studio outtakes memorialized on Rosa – “I said, ‘You fucking die!’ … It didn’t have anything to do with anything” or “All I know is that there were rumors he was into field hockey players … They were so hush-hush; they were so quiet about it.  And then the next thing you know…”).  Did they really have to do six b-sides?… 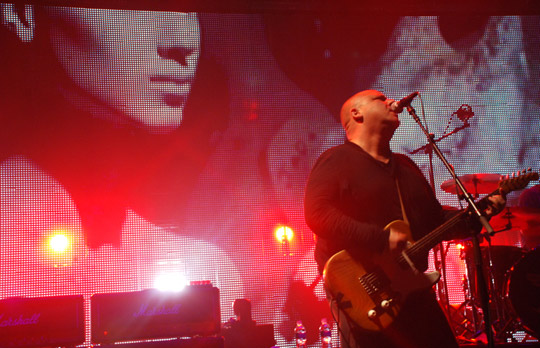 But no band with more than one album under their belt is going to play every single song you like of theirs.  With the Pixies’ latest return, you got all of Doolittle, which was more than enough, and more.  Yeah, a new album next year would be excellent – but how about a Surfer Rosa/Come On Pilgrim tour, with a Trompe Le Monde twentieth anniversary go-round in 2011?  With as many great songs as the Pixies already have, two decades after the fact, it’ll be hard for them to ever wear out their welcome (back) (again). 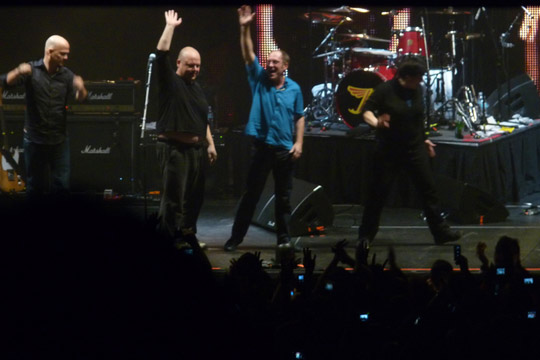