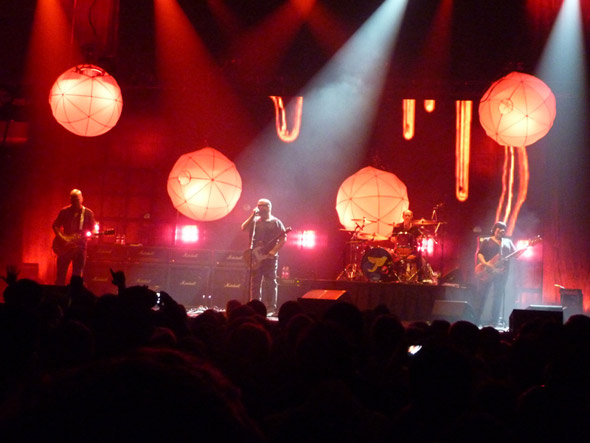 Click here for QRO’s review of Pixies on the Doolittle tour at Hammerstein Ballroom in New York, NY on November 23rd, 2009

Perhaps reluctant to reveal their advanced age and weight, indie-rock icons the Pixies took to a darkened Rimac stage in San Diego on Sunday, September 26th and opened with the obscure "Dance the Manta Ray".  Like an insecure lover, the group kept the lights low for "Weird at My School" and "Bailey’s Walk".  According to the Boston quartet’s bassist-vocalist Kim Deal, "Some b-sides were so obscure we had to learn them to play them."  Transpiring in less than ten minutes, the first four songs feel like a quickie.

Then the concert lighting kicked in and the band launched into what everyone is assembled to hear, 1989 essential Doolittle.  "Debaser" began and both band and audience came alive.  Fans sang along with Black Francis’s cryptic lyrics, "But I am un chien Andalusia."  He sounded nasal compared to the full-throated crowd.

The band’s loud-soft-loud dynamic was gloriously loud, seductively soft.  A wall of Marshall amps (for Francis and lead guitarist Joey Santiago) and an Ampeg tower (for Deal) supplied the powerful sound.  From atop his riser, drummer David Lovering’s snare popped like rifle fire.  The band was tight, professional.

The jaunty "Monkey Gone to Heaven" incited the audience to count off on hoisted fingers the tunes’ refrain, "If man is five / Then the devil is six / And if the devil is six / Then god is seven!"  Nearby, a young brunette jumped, screamed, and contorted as if she’d done the math.

Deal introduced "There Goes My Gun", "This is the second side of the album, toward the end, where people kind of buried songs."  But nothing from Doolittle went unappreciated.  The audience gave a rousing response to the country-tinged ballad "Silver".  And though the propulsive, bass heavy "Gouge Away" should have sealed the deal, the crowd cheered the Pixies back for a double encore, which included "Wave of Mutilation," "Where Is My Mind?" and "Gigantic". 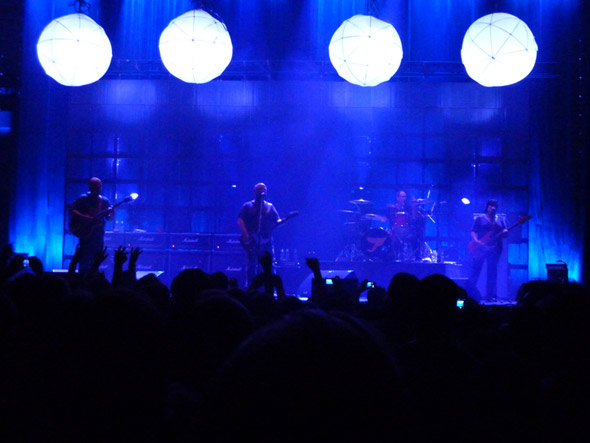 The Acorn : No Ghost