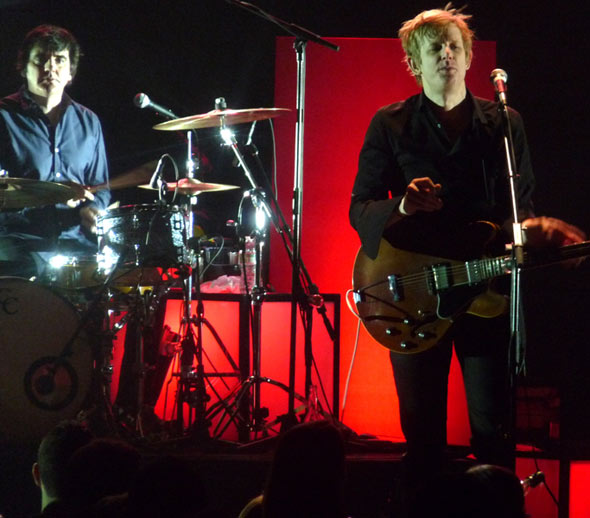 Click here for photos of Spoon at the start of the tour, the week before at SXSW in Austin, TX in the QRO Concert Photo Gallery

Click here for photos of Spoon at 2014 Music Fest NW in Portland, OR in the QRO Concert Photo Gallery

Click here for photos of Spoon at 2014 Lollapalooza in Chicago, IL in the QRO Concert Photo Gallery

Click here for photos of Spoon at NXNE 2014 in Toronto, ON, Canada in the QRO Concert Photo Gallery

Click here for photos of Spoon at 2014 Governors Ball in New York, NY in the QRO Concert Photo Gallery

Click here for photos of Spoon at 2014 NOS Primavera Sound in Oporto, Portugal in the QRO Concert Photo Gallery

Click here for photos of Spoon at 2014 Primavera Sound in Barcelona, Spain in the QRO Concert Photo Gallery

After the phenomenal success of Spoon’s sixth record, Ga Ga Ga Ga Ga (QRO review), there seemed nowhere further that the Austin band could go.  How could they follow-up one of the best records of 2007 (QRO Best Albums of 2007)?  How could anything more that the band did not stand in the shadow of a record that’s only gotten better & more essential in the years since its release?  After some serious time off, Spoon returned with a more stripped-down sound, eschewing some of the bells & whistles – and horns – of Ga, for a starker Transference (QRO review) in 2010.  And for their live show?  Oh, how about playing Radio City Music Hall (QRO venue review)…

The Friday, March 26th show in New York was near the start of Spoon’s Transference tour, after kicking it off at home on Day One of South-by-Southwest (QRO photos).  Ga got the band so big because it was able reach outside of their indie audience base and hook a more mainstream crowd, without losing long-time Spoon lovers.  Indeed, the group has always been able to do that, but Ga just did it on a bigger scale, and while Transference scaled down in instrumentation, Spoon has not scaled down in appeal.  Radio City was full of everyone from indie kids who’ve gone to hundreds of shows, but never to Radio City, to middle-aged parents (even saw at least one baby in tow…), from frat boys & graduated frat boys who are now working in high-pressure sales to the manager of Ra Ra Riot (QRO spotlight on).  There are few acts that can reach that far, and precious few of those are still growing, but Spoon fits the bill. 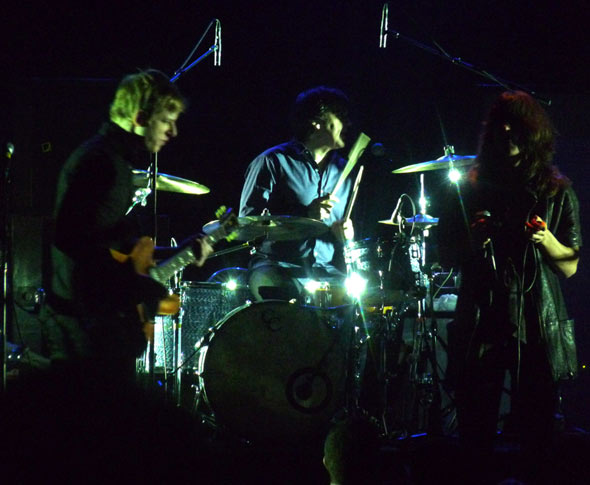 Click here for photos of Spoon at 2010 Crossing Border Festival in den Haag, Netherlands in the QRO Concert Photo Gallery

Click here for photos of Spoon at Cake Shop in New York, NY on September 13th, 2010 in the QRO Concert Photo Gallery

Click here for photos of Spoon at 2010 Musicfest in Union County, NY in the QRO Concert Photo Gallery

Click here for photos of Spoon at Terminal 5 in New York, NY on April 9th, 2008 in the QRO Concert Photo Gallery

Click here for photos of Spoon at CMJ 2007 in New York, NY in the QRO Concert Photo Gallery

Not that they’ve forgotten their roots, as Spoon started off with the night’s oldest number, “Me and the Bean”, from 2001’s Girls Can Tell.  Still, Transference & Ga dominated the set list, at seven songs each.  There was more Transference in the first half, more Ga in the backside of the show, which was a wise move, displaying the new record in the early going, with such pieces after “Bean” as back-to-back-to-back “Mystery Zone”, “Written In Reverse” and “Got Nuffin”, while rewarding before the encore break with Ga already-classics like “You Got Yr. Cherry Bomb” and “The Underdog”.

In between, Spoon wasn’t afraid to seriously mix it up.  Not only did the night contain three songs each from 2005’s Gimme Fiction and 2002’s Kill the Moonlight, but also three covers.  Singer/guitarist Britt Daniel introduced The Damned’s “Love Song” before they played it, and then followed that up with Transference‘s own love song, “Is Love Forever?”, but Fiery Furnaces’ “Waiting To Know You” needed no introduction, as joining the band on stage was Furnaces singer Eleanor Freiburger, who stayed on afterwards for Moonlight‘s “Something Something”.

But that wasn’t the only guest at Radio City.  After older Gimme classics like “The Beat and Dragon, Adored” & “I Summon You”, when Spoon shifted into the Ga run towards the encore break, they were joined by a full horn section.  While Transference didn’t need no stinkin’ horns, Ga was heavy with them, and there was really no way that Spoon could play a place like Radio City Music Hall without a horn section.  Especially if you’d heard their sub-par, horn-less rendition of maybe their best song ever, “The Underdog”, at SXSW (QRO Day One Recap) – there’s just no comparison to a horn-y “Underdog”, and the song still holds up as one of the most overwhelmingly pleasing songs out there, channeling Billy Joel at his early-eighties best, through an indie medium. 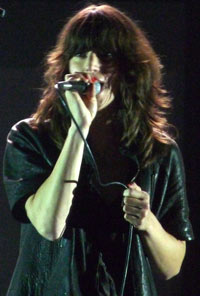 Another addition that would have been easy to miss amidst Daniel, bassist Rob Pope, drummer Jim Eno, and keyboardist/guitarist Eric Harvey was guest-percussionist/guitarist Steve Patterson (QRO interview) of Brooklyn’s own White Rabbits (QRO spotlight on).  In their time off, Daniel came to New York to produce the Rabbits’ sophomore release, It’s Frightening (QRO review), after the younger band had served as opener on part of the Ga tour.  Daniel kept up with White Rabbits after the record was done, appearing with them on Jimmy Kimmel Live – and Patterson repaid the favor, guesting recently with Spoon on Late Show with David Letterman (note that this makes three appearances by Patterson on Letterman, as the Rabbits themselves have played The Late Show twice – QRO Indie on Late Night TV).  While White Rabbits have graduated to doing their own headlining gigs and are not with the band on the entire tour, if Spoon was going to be in New York, Patterson was going to be there, or be square.

During that 2007 Ga tour, Spoon played a free Camel Cigarettes-sponsored show (QRO photos) at to-the-west Terminal 5 (QRO venue review), but Rabbits didn’t open that show, either, as they instead opened for Spoon’s main opener The Walkmen (QRO live review) – who themselves just recently opened for Spoon at SXSW 2010 (QRO photos) – at their own Camel-sponsored show (QRO photos of The Walkmen – QRO photos of White Rabbits).  Opening for Spoon at Terminal 5 that night were Handsome Furs (QRO photos), the husband-and-wife side-project of Dan Boeckner of Wolf Parade (QRO live review) – and Boeckner guest-spotted himself at Radio City in 2010, joining Spoon after their encore return of Transference‘s “Trouble” for a great rendition of Wolf Parade’s own excellent “Modern World” (a.k.a., the song that made you & everyone else first notice Wolf Parade), staying on for Transference‘s “I Saw the Light”.

But the night wasn’t over quite yet, as Spoon returned for a second encore.  Daniel told the crowd that they were running up against Radio City’s hard curfew (he also told the audience that first opener Strange Boys – QRO album review – had had their van towed, while they were playing, and asked people to buy Strange Boys merch; is there anyone else this big in music who’s as caring about his openers?…).  But after asking the rest of the band, “What do you want to play?”, they all threw down Moonlight‘s “Small Stakes” to close the evening out. 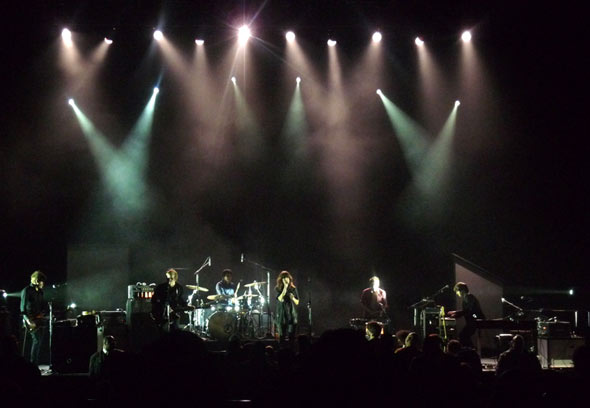 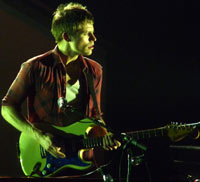 With any band with as long & strong a discography as Spoon, anyone will have quibbles with the set list.  The Transference/Ga heaviness meant that the band weren’t able to play all of your older favorites, as the night missing such pieces as Gimme‘s “The Two Sides of Monsieur Valentine”, “I Turn My Camera On” & “Sister Jack”, Moonlight‘s “The Way We Get By” & “Stay Don’t Go”, or Girls‘s “Fitted Shirt” & “Chicago At Night” (hopefully they played the last one on their second city date…).  But they also couldn’t find a place for Transference‘s “Out Go the Lights”, or Ga‘s “My Japanese Cigarette Case” (though slotting Moonlight‘s “Jonathan Fisk” in amidst four Ga songs before the encore break was pitch-perfect)?  And putting two covers, “Love Song” and “Waiting To Know You”, so close together, and relatively early in the set, took some of the energy out of the show, especially if you’re not well-versed in The Damned and/or Fiery Furnaces (and who, other than Spoon, is a fan of both?…), as well as feeling a little indulgent by the band.  And any time a rock band plays Radio City, it’s a little weird – people stuck in their seats (though everyone was up on their feet by the second song), with room to breath, but also to distract by texting & e-mailing & taking photos & everything else one can do on an iPhone.

But Spoon is certainly big enough to play Radio City Music Hall (next stop Madison Square Garden (QRO venue review)?…), with an audience of both folks who’ve never gone to any place that nice, and of folks who’ve never gone to any place not that nice.  And their music is perfectly both alt- and -rock.  How did Spoon get so big?  Oh yeah, that’s how… 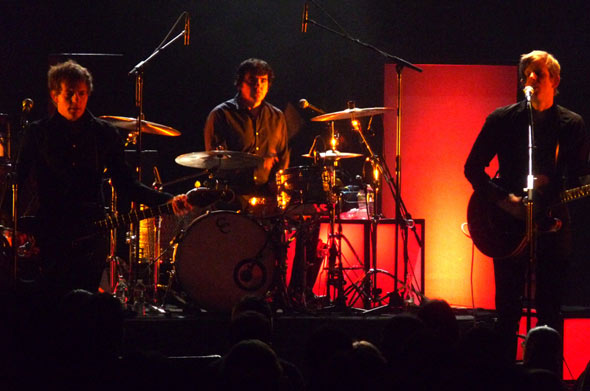