We had a trio of correspondents covering South-by-Southwest in 2010: Robin Sinhababu, Ted Chase, and Abby Johnston.  This is Robin’s recap of Day Two; Ted’s is here, and Abby’s is here. 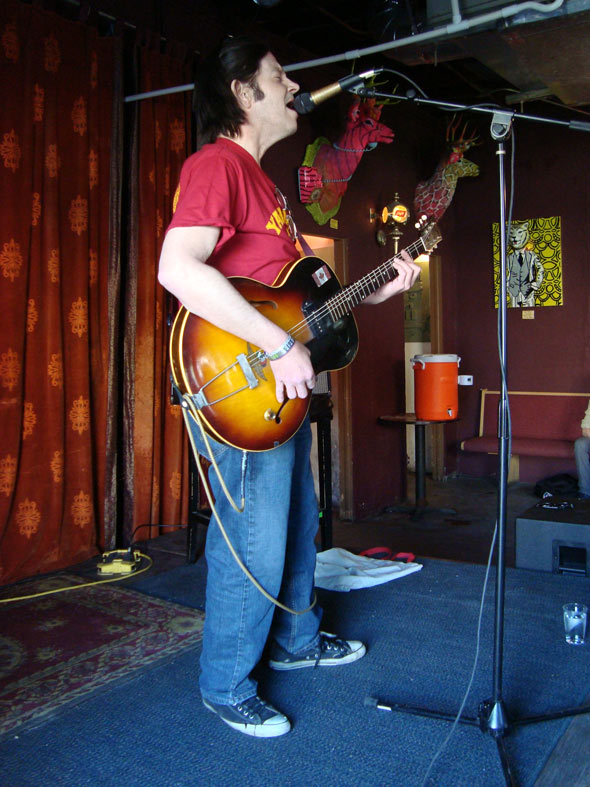 Grant Hart (QRO interview) looked well.  He played a Gibson electric hollow-body with enough force and distortion for the converted rock songs, and sounded good on the lower-key numbers, too.  I was keen to hear “You’re the Reflection of the Moon on the Water,” which appears in a good, Doors-y arrangement on his new album, Hot Wax (QRO review).  I enjoyed the solo rendition more; as good as the arrangement is, it’s a personal song and is better served by Hart’s live vocals, which are much stronger than his soft-spoken demeanor suggests.

He’s been taking requests at his shows lately, and folks seemed happy to hear “Green Eyes”, which is actually better played by Grant Hart on vocals and guitar than it was by Hüsker Dü (QRO spotlight on) on Flip Your Wig.  The Nova Mob tune “Last Days of Pompeii” was similarly strong.

After he finished his last tune, Hart moved to unplug his guitar, but turned back to the mic for a moment to say, “Alex Chilton.”  Simple dedications can be the most affecting. 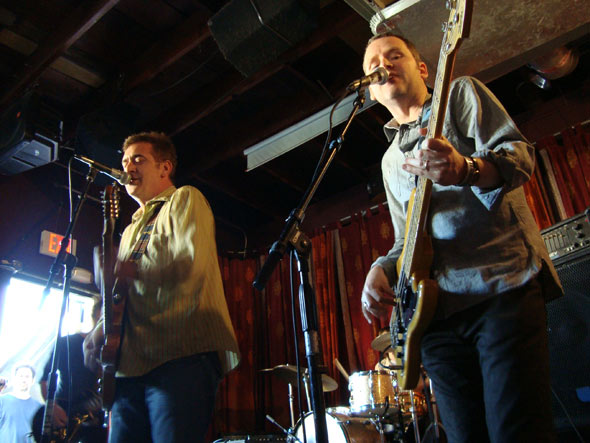 Mid-tempo pop/rock is like metal to me in that I enjoy the shows a lot more than the records.  In both cases, there’s the fun of watching people play instruments that you don’t get with recordings, but with metal, there’s also a certain energy and heaviness that’s apparently almost impossible to record.  I guess what you lose when pop/rock gets recorded is the guitar noise obscuring the vocals, which could be good or bad.

Backed by a guitarist, a singing bassist, and a drummer who looked about sixteen, Keene made a show of vocal and guitar harmonies.  He and the band seemed sincere and into it, as did the substantial crowd. 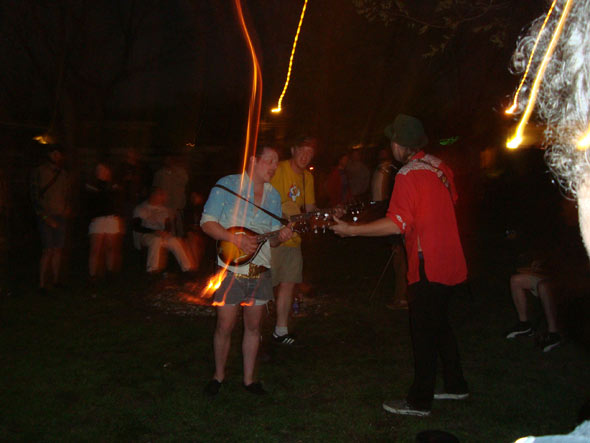 One good element of this party was that Owen Fitzgerald of Chapel Hill’s Jokes and Jokes and Jokes, along with a couple other guys, played old-time music on the B-stage, that is around the fire, as the electrified bands set up. 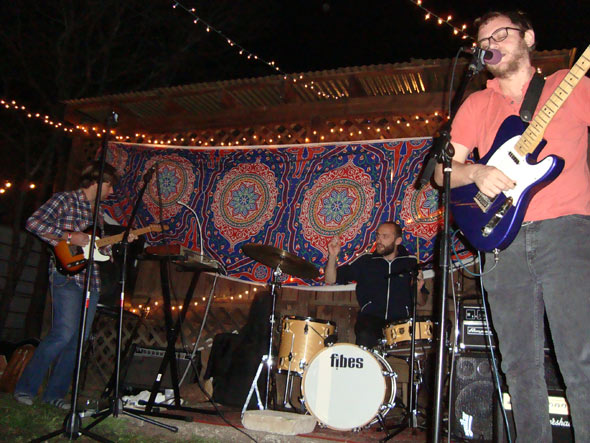 My friend David Frank plays in Dudes Die, and I was glad to see him singing and stretching out on the kit.  He previously drummed for The Unfortunate Heads, whose name was pretty dumb, but grew on me.  Thing was, they were derivative of Wilco (QRO live review), which one would not guess from their name, and in my mind it became an curious appendage of the band.

Anyway, Dudes Die is a trio, and the good kind in which each member is fun to watch and also makes the other two guys better.  The latter is usually accomplished with vocal harmonies in Dudes Die.  That was the only real constant between what I expected of Dudes Die and what they played; the songs I’d heard online seemed like flimsy guitar pop that I wouldn’t like.  Some flimsiness persisted, what with their bass-less lineup, but those kinds of sonic issues are less of an issue live.

Also, I almost forgot to write that when Dave told me about the new band last year, I thought he said “Dudesty”, as in ‘pigsty’, which I consider a better name than ‘Dudes Die’.  ‘Dudesty’, not ‘Pigsty’.  Although I’d go see a band called ‘Pigsty’, too.  That said, one of the better things about calling the band Dudes Die is the title of one of their songs, which if I heard right was “Dudes Die Usually Over Stupid Bullshit”. 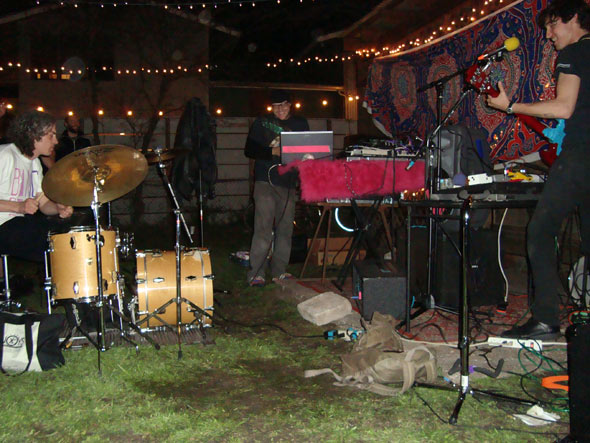 FM Campers were also surprising in how well they went over in the outdoor fire party setting.  The airy, spaced out moments, which are many in their recordings, are hardly party music.  Instead, they focused on rhythm and noise and had a small crowd dancing and a larger crowd paying attention.  The drummer set up with his back to the audience, for some reason, but their presence was above average for a band with every member tethered to a stationary instrument.  Guys seemed to be having as good a time as the crowd.

The choice and timing of noise and samples in their songs was a high point.  I’d like to see this band again, or at least go to another party in a yard.  Maybe next weekend. 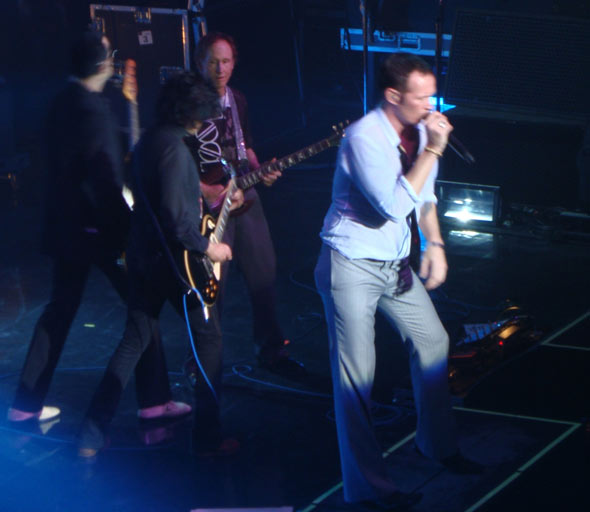 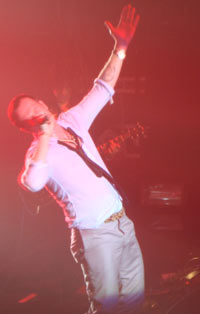 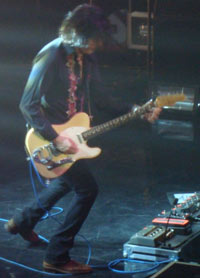 I expected a lot of STP.  Whether they are imitators of grunge and/or Led Zeppelin, their skills are stacked in favor of a good live show: they’re all strong players and have a bunch of good singles, and that’s enough to carry any band through a set.  Their liabilities – bad lyrics, Scott Weiland’s banter, and albums so laden with filler that only one of their six approaches quality from start to finish – aren’t as big a deal on stage with Weiland sober. 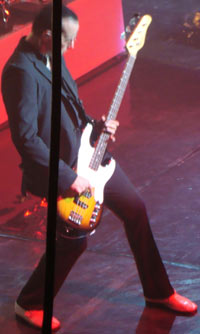 They delivered.  They played all the hits you’d expect, and are clearly in good shape.  It’s tough to write about the good things about their show, because they weren’t surprising.  I 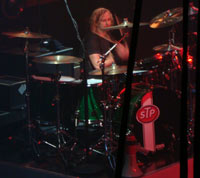 expected Eric Kretz to do a good Bonham impression, and he did, although he could have hit a little harder.  I expected Robert DeLeo to dress impeccably and to play cool bass lines, the least derivative aspect of the band, and he did.  I expected Dean DeLeo to play great rhythm guitar and nail his few solos, and he mostly did, although he kind of phoned in the solo to “Trippin’ on a Hole in a Paper Heart”, which maybe is just too awesome on the studio version to replicate every time.  And I expected Weiland to sing out with those gravelly, muscular pipes that somehow lend themselves to falsetto.  He did, and then some. 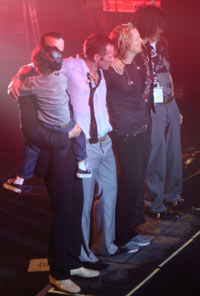 Weiland was funny on stage; he seemed a bit shy.  He didn’t do his infamous glam dance but for a few seconds, and most of his limited banter succinctly introduced the next song or mentioned the self-titled album that’s coming in May (QRO Upcoming Releases).  Of course, folks were most excited to hear the hits, not the new songs, and this paradigm provided for a bit of dry humor, which I would not have expected of Weiland.  The third time he mentioned that the next song was a new one, appearing on their upcoming record, and so on, the band launched into “Plush”… 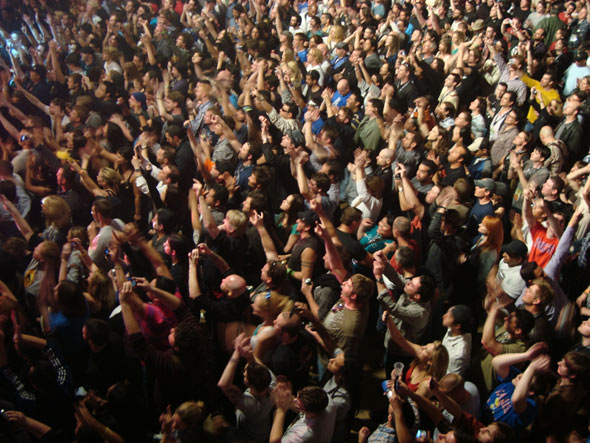 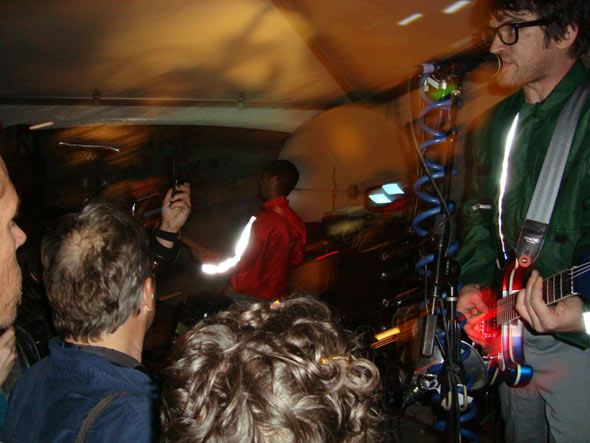 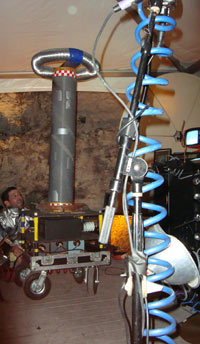 The most exciting thing to read about the Man… or Astro-man? reunion was the presence of original guitarist Star Crunch, who was responsible for many of the badass leads and vocals in the band’s classic lineup.

The show was still bound by genre; the songs started to sound alike after a little while.  This made the stage gimmicks more necessity than amenity, because the show might have approached dullness without them.  And sameness is an especially bad quality for a surf-rock band.  Their songs don’t have much narrative individually, so stacked together they can really get monotonous.

Nonetheless, there’s nowhere I’d rather have been at that hour.  The musical and technical display they put on was totally ridiculous and had a special, bizarre energy to it.  If anyone else in the crowd had any doubts that they were in the right place at that moment, I hope they were as persuaded as I was when one of the dudes came on in a space suit, set a theremin on fire, and then produced an enormous tesla coil that shot sparks every which way and looked as if it belonged on the moon.  Now that’s how you finish a sci-fi-themed mostly instrumental surf-rock show. 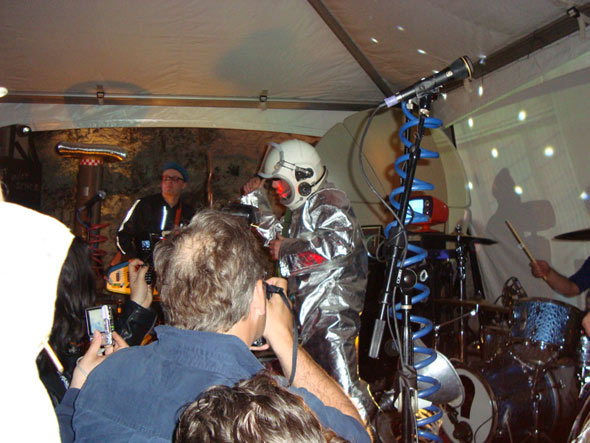 Walter Schreifels : On Tour in The U.K.