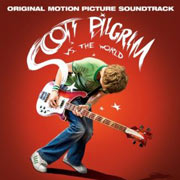 “We are Sex Bob-omb!  One two three four!” declares Sex Bob-omb’s drummer Kim at the top of her lungs, just as a wave of distortion attacks from all sides and shows no signs of letting up for anything.  It’s a pity more soundtracks don’t directly begin like this.

The Scott Pilgrim vs. The World soundtrack clocks in at just under an hour, and each minute is rightfully deserved.  There is a wide range of groups who appear, from T-Rex and The Rolling Stones to Metric (QRO live review) and Black Lips (QRO live review).  It’s not just tracks the entire world would instantly recognize either, but rather selections diehard fans of the groups have come to love that perfectly fit the tone of the film.

While the old material fares well, it’s the new material recorded just for the film that make this collection really stand out above all the other soundtracks of the past few years.  Besides original material from both Beck (QRO album review) and Broken Social Scene (QRO spotlight on), there are some surprisingly catchy (and hilariously quotable) tunes from the film’s fictional groups Crash & The Boys and Sex Bob-omb, which include Michael Cera, playing the titular character of Scott Pilgrim, on bass.  Even little added bits of detail like the 8-bit version of Sex Bob-omb’s “Threshold” help to push this soundtrack past the status quo.

While they may not all be home runs, these songs as a whole comprise one of the best non-orchestral soundtracks of the decade.  There is blatant passion put into the choosing of each individual track, made especially evident by the inclusion of “I Heard Ramona Sing” and “Scott Pilgrim”, songs that inspired the original comic book the film itself was based on.  This is more than just a collection of songs; it’s a definition of the up and coming Social Network Generation.  Step aside, Garden State.  Your soundtrack successor has arrived.