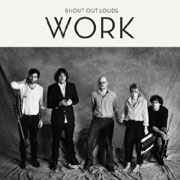 When the Shout Out Louds first came to the world’s attention, thanks to the 2005 release of debut Howl Howl Gaff Gaff (two years after it came out in their native Sweden), they were labeled part of the ‘Swedish Sensations’ (QRO feature) of that year, and their indie-pop stylings were somewhat overshadowed by the biggest breakthrough out of Stockholm, Peter Bjorn and John (QRO spotlight on).  For their follow-up, 2007’s Our Ill Wills (QRO review), the band got PB&J’s Björn Yttling to produce, and while it at least came out the same year in America & at home, Our Ill Wills found itself in the shadow of releases by labelmates Arcade Fire (Neon Bible – QRO review) & Spoon (Ga Ga Ga Ga Ga – QRO review), in Merge Records’ banner year.  Yet the Shout Out Louds have been putting out music as good as, or better than any of those, and it still holds true with their latest, Work, which takes their indie-pop excellence, removes some of the extras, but builds it into a call to emotional arms.

Click here for photos of the Shout Out Louds at Music Hall in Williamsburg in Brooklyn, NY on October 26th, 2007 in the QRO Concert Photo Gallery

Click here for QRO’s review of the Shout Out Louds at Spiegeltent in New York, NY on July 16th, 2007

Work opens stupendously with “1999”, whose indie-pop procession goes forward & upward – and right into the brightening & building follower, single “Fall Hard”.  Indie-pop grandeur is present throughout Work; even when the Shout Out Louds go sad, soft, and removed, their sound eventually moves into bigness, like on “Play the Game”, “Candle Burned Out” and “Moon”.  Not that the band can’t do sad restraint – “Candle” has little, lost beauty, while “Moon” does it orchestral.  Meanwhile, Work ends on the start-to-finish sway of “Too Late, Too Slow”, though it’s more relaxed and accepting than downbeat (and actually a little funky).

But the Shout Out Louds’ heart is in their call to emotional arms, epitomized in singer/guitarist Adam Olenius’ (QRO interview) vocals, but present throughout the group.  Single “Walls” brings that call forward, while “Throwing Stones” keeps it going, but it is in penultimate “Show Me Something New” that it is perfected.  The bright and uplifting press totally wins over any & all.

Olenius’ more evocative stance on Work does push singer/keyboardist Bebban Stenbord a bit further back, and after she had moved more to the fore on Our Ill Wills (including her first lead vocals piece, “Blue Headlights”).  “Stripping away the bells & whistles from previous work”, as Merge has described the record, also takes away some of the indie-pop shine which had made the band’s prior material so instantly accessible (especially the cowbell-like go-go of Ill Wills‘s single, “Tonight I Have To Leave It” – QRO video).  But the Shout Out Louds go from strength to strength yet again, and are more than ready to get the indie-pop praise & attention they’re so very due (though Spoon just put out a new record – QRO review…).

Midlake : The Courage of Others