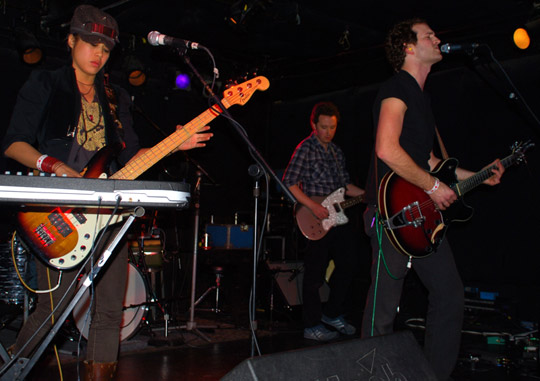 With the alternative music business in something of a transition (read: mess) these days, bands between labels can sometimes get lost or forgotten while they shop their new record, which is why it is essential that they tour to keep fans on their toes.  Thus Atlanta, Georgia’s Snowden – in-between their 2006 debut full-length Anti-Anti and its long-awaited follow-up, came to Brooklyn’s Southpaw (QRO venue review) on a cold & rainy December 4th with a bag of new and old songs.  While spirits were a bit damp, that played into a nicely sadder, darker set.

Click here for photos of Snowden at Mercury Lounge in New York, NY on May 15th, 2008 in the QRO Concert Photo Gallery

After opening for the big-name likes of Arcade Fire (QRO live review), Clap Your Hands Say Yeah (QRO live review), and fellow Southerners Kings of Leon (QRO photos – when on tour with Snowden) – not to mention making a live DVD at Manhattan’s own Bowery Ballroom (QRO venue review) – Snowden largely disappeared to work on their sophomore record, with only one recent, headlining tour, last spring.  The music biz being what it is these days, the band has a bunch of new material that’s still yet to be studio-recorded, but they were still able to show it off at Southpaw.

It all started with “Keep Quiet”, a haunting piece that pointed to a raised prominence of the bass and drums that night, as well as more of an echo.  Strong, it was still somewhat of a strange pick as opener, even if the band wanted to start with something new.  The band mixed and matched between old and new on their set list, with never more than two of the same kind in a row, sliding from “Quiet” into Anti-Anti’s “Between the Rent and Me” & “Filler Is Wasted”.  The pleading tragedy of “Rent” worked as a growth in scope from “Quiet”, while a more rockin’ drum & bass came out on “Filler”.

The two new pieces that followed, “Anemone Arms” and an untitled number, kept the prominent bass-line even as they expanded Snowden’s sound.  “Anemone” was sad, dark, and slow, but also carrying, while the untitled track stretching further and further out.  The band switched to a more pressing nature, but didn’t lose their touch, on Anti’s “Black Eyes”, and that press kept forward with the new pair of “So Red” and “Lemon Peel”.  While the guitars might have been a bit too piercing on “Red”, the driving drumbeat from drummer Chandler Rentz on both new numbers brought a dark march forward.

Singer/guitarist Jordan Jeffares (QRO interview) then said they were going to hit up some old numbers (after having started the set by saying they were going to play some new stuff), which brought a cheer from the crowd – but also a smirk from Jeffares.  You can’t blame fans for loving the stuff that made them first love the band (and Snowden ain’t exactly the first group to experience this…) – especially when the group brought out Anti’s title track.  The attractive ladies in the crowd seemed to move much closer to the front with the first calls from the epic number (as one admitted, “Chicks dig this song…”), and were kept there not just by Anti’s dark drive “Like Bullets”, but also the night’s new finisher, “Candy For Everyone”, whose slow, sad, grand lament fit the conditions outside. 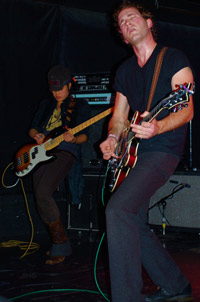 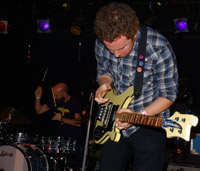 The state of the weather and the state of the business did seem to wear a bit on Snowden, with Jeffares admitting it was taking time for the new record to come out – and the group unfortunately didn’t make an encore return with Anti’s “Innocent Heathen”, as was on the set list (QRO photo).  But the darker evening suited the times when the guitarist David Payne joined bassist/keyboardist Corinne Lee in the rare ‘double bassists’ (all Ned’s Atomic Dustbin-y…), and didn’t keep Jeffares and Lee from rising and falling in tandem – or the crowd from having a memorable evening. 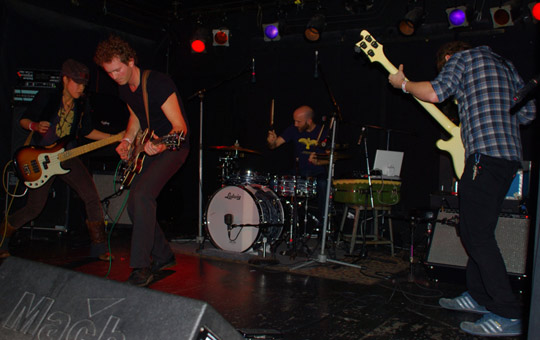