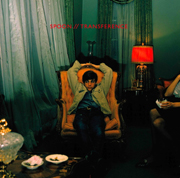 What do you do after you had one of the the best albums of 2007 (QRO Top Albums of 2007)?  If you’re Britt Daniel of Spoon, after touring the top-notch Ga Ga Ga Ga Ga (QRO review), you let the band lie low for a while, head to Brooklyn to produce the new White Rabbits (QRO spotlight on) album, It’s Frightening (QRO review), appear with them on Jimmy Kimmel Live (QRO Indie on Late Night TV) – but the Spoon is always in your heart.  Yet, despite the success – commercial as well as critical – for Ga Ga Ga Ga Ga, new record Transference is a more downbeat affair, as well as more even, but it’s still great Spoon, and that’s what you were looking for.

One trademark Transference & Ga share: don’t judge them on first listen, as both improve remarkably with further spins.  Indeed, Ga has stayed in people’s playlists the way Merge Records’ other big, excellent release of 2007, Arcade Fire’s Neon Bible (QRO review), hasn’t been able to (but Spoon’s a band with a much longer pedigree).  Daniel’s sharply echoed indie-rock can seem a little one-note at first, but he & Spoon have the imagination to do more.  Not that he necessarily needs to; Transference‘s “Mystery Zone” may just be ‘Exhibit A: Spoon’, and lack the necessary oomph to go above that, but that’s still a high, and accomplished bar, in and of itself.

Click here for photos of Spoon, at home in Austin at the start of the Transference tour, at Stubbs at SXSW 2010

Click here for photos of Spoon at Terminal 5 in New York, NY on April 9th, 2008 in the QRO Photo Gallery

Click here for photos of Spoon at CMJ 2007 in New York, NY in the QRO Photo Gallery

But when Spoon go beyond that, especially in the back half of Transference, they go even greater.  More pressure to the sharpness makes for greatness on singles “Written In Reverse” and “Got Nuffin”.  The addition of some, but not too much, jangle and lo-fi to “Trouble” is just enough (and avoids being too much like the million-and-one garage-rock bands popping up these days), thanks to also bringing the right amount of uplift.  And “Good Night Laura” is the world-wise, tragic girl riff Spoon that always stands out.

You could say that Transference doesn’t stand out enough – whereas Ga had the seventies horn section-led Billy Joel uplift on “Underdog” right next to the moody & cool “My Japanese Cigarette Case”, there isn’t nearly the variation, track-to-track, on Transference.  Spoon’s emotions are largely subdued, while the instrumentation goes only from relatively stripped to the never too big.  But that also delivers an evener record, top-to-bottom.  It’s akin to another big-name alt-rock veteran act, centered around one guy, with a five-letter band name: Wilco (QRO live review), who went from the seventies Randy Newman-ness – both good and bad – of the enormously successful Sky Blue Sky (QRO review) to the more balanced subsequent Wilco (The Album) (QRO review).

And with every new Spoon album, like every new Wilco album, it’s very easy to say, “It’s not as good as older Record X.”  But that’s because their records hold up so well over time.  The same is true of Transference.  As The Tick would say, “SPOON!”