<img src="http://www.qromag.com/wp-content/uploads/2010/06/starsthefiveghosts.jpg" alt=" " />The feeling of pure happiness is indeed a fleeting sentiment in <i>The Five Ghosts</i>, but the overall magnitude outweighs the barrage of angst along... 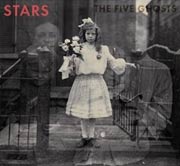 The feeling of pure happiness is indeed a fleeting sentiment in The Five Ghosts.  The latest instalment from Montreal’s Stars in fact opens amid the desperate pleas of “Dead Hearts”, which is surely as far away from happiness as one could venture.  Despite the ensuing flood of poignancy, the song’s haunting elegance proves yet again that the overall magnitude of any Stars album outweighs the barrage of angst along the way.

The emotional tide is clearly the strongest force in The Five Ghosts, much as it’s been throughout the band’s ten-year existence.  While their last release was a tad more commercially indulgent, this latest album is reminiscent of their noticeably less produced, 2004 gem Set Yourself On Fire.  Though the former – 2007’s In Our Bedroom After The War – was indeed a formidable record, it at times walked the narrow line of being both overindulgent and underwhelming.

After a quiet departure from landmark indie record label Arts & Crafts (Broken Social Scene, Feist) earlier this year, Stars have happily retraced their footsteps to the sound that originally brought them into the spotlight.  The result: The Five Ghosts completely and effortlessly roams the infinite frontiers of emotion.  From upbeat song “Wasted Daylight”, to the downtrodden “The Last Song Ever Written”, and everywhere in between, Stars touches every nerve, hits every note.  Furthermore, with hints of synth pop, electro, art rock, and more, the band spans the popular genre itself.

Like every recording in the Stars catalogue, The Five Ghosts is not without its standouts.  While it’s too early to say if the album contains another “Calendar Girl” or “Your Ex Lover Is Dead”, this latest record does show extraordinary promise in numbers like “Winter Bones” and “Dead Hearts”.  Thankfully, the nature of these new songs allows each track to draw listeners in without detracting from the album’s overall flow.

As for everything else – nothing much has changed.  Torquil Campbell and Amy Millan still take turns on lead vocals, though as always, are much more potent together.  Instrumentally, Stars remain in peak condition, and stylistically, their adventurous nature is this time met with the wisdom of their collective experience.  Ultimately, that wisdom is the glue that holds it all together.

At one of the most memorable points in the album, Millan ever so delicately sings: “Changes – I’ve never been good with change.”  Whether it is a mantra for the band’s direction, or instead yet another fantastically reflective love story, the line rings true for the band in an entirely positive way.  The Five Ghosts is a benchmark album, and with it, Stars have surely re-established themselves as the masters of melodramatic popular song.