Even if you Hate Music, you'll love Superchunk.... 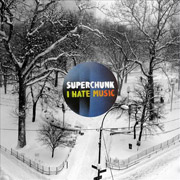 Superchunk will probably always be best known for founding Durham, North Carolina’s Merge Records, an indie imprint that has made very good (Arcade Fire, She & Him, Spoon…), but before all of that, they were a great nineties alt-rock band (who started Merge as their own personal label).  Ever since 2001’s aptly-titled Here’s To Shutting Up, the group hinted at reunions with one-off performances (QRO live review) and even the odd new song (such as “Misfits & Mistakes” seven-inch for the Aqua Teen Hunger Force Colon Movie Film for Theaters), but it was only in 2010 that they put out a new full-length, Majesty Shredding (QRO review) – which was everything that was great about Superchunk in the first place.  I Hate Music continues that trend, even if it can’t be quite as special.

Before music was either party-sloppy or skilled-difficult, alt-rock could be both: interesting and enjoyable, and Superchunk were that in the nineties, were that again on Majesty, and are that once again now.  Any band who titles their album ‘I Hate Music’ (especially when they’re deeply involved in not just their own music, but also other people’s music), has to have a sense of humor (though, admittedly, “I Hate Music” was done best by The Replacements – QRO reissue review – but what wasn’t?…), yet it blends nicely with the group’s positive feelings about still being able to make Music.  Yes, there is a wistful nature on pieces from opener “Overflows” to closer “What Can We Do”, but it’s a cheerful one.  Their happiness about music almost comes off as kid-like (frontman Mac McCaughan’s voice has a kid-like sound – though not as much as when he did a duet with Meatwad on the b-side to “Misfits & Mistakes”), such as on the ultra-catchy “Me & You & Jackie Mittoo”, but they’re just happy about music – witness “FOH”, where McCaughan sings, “How’s everything at the front of the house?”

While every song on I Hate Music is a pleasure, they can slide a little towards the simple – on the fun vs. skill scale, this is a more fun than skilled record, but still one from before there was a ‘vs.’.  So even if you Hate Music, you’ll love Superchunk.

Superchunk – Me & You & Jackie Mittoo